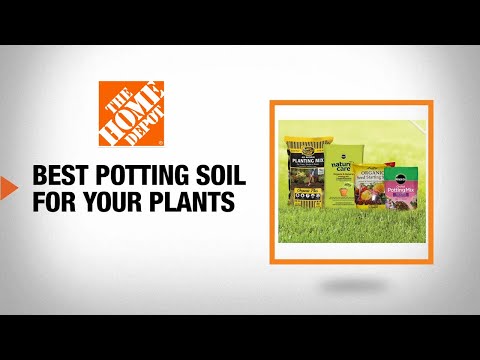 Good potting soil delivers nutrients to your plants and helps water drain away to prevent overwatering. Use this guide to learn about different types of soil so you can find the best potting soil for your plants. 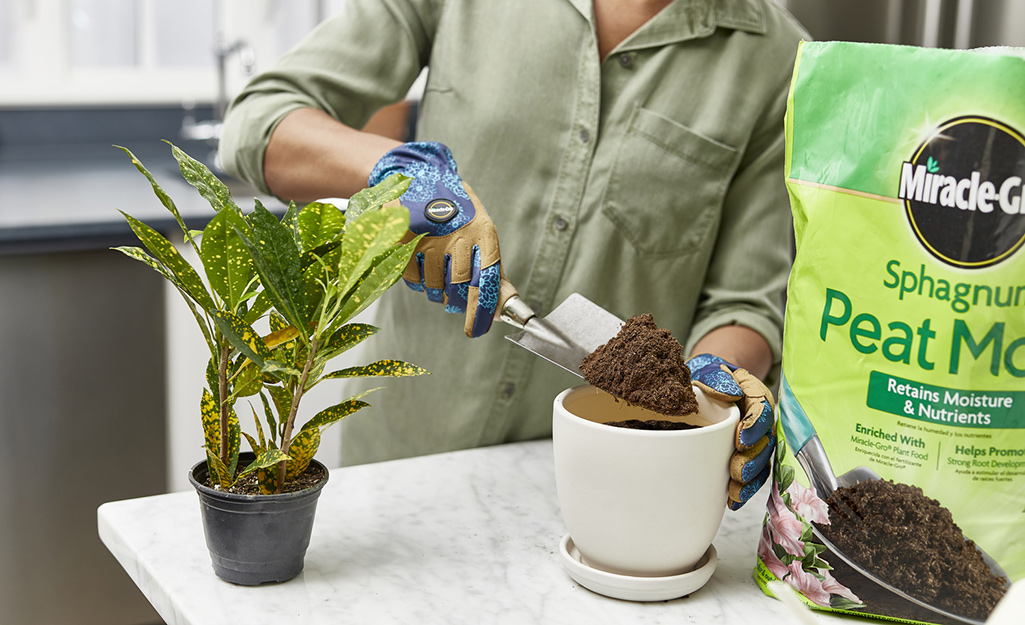 Different types of potting soils contain different ingredients. Most potting soils are a combination of pine bark, peat moss, perlite and vermiculite. Most are sterilized to kill microorganisms that might cause plant diseases.

Potting soil isn’t actually soil, because it doesn't have any humus and minerals. Some of the best potting soils contain fertilizer, but if yours doesn’t, it’s easy to add.

Vermiculite is made from compressed minerals that expand when they absorb water. When vermiculite is dry, it looks like spongy flakes. When added to potting soil, and the soil is watered, the flakes help hold water. Vermiculite also helps aerate the soil so it doesn't pack down. Potting soils with vermiculite are good for plants that like a lot of water and for starting seeds.

Sphagnum peat moss comes from sphagnum bogs. It's dried and often mixed with other organic matter. Sphagnum peat moss is mixed into sandy soils to help hold moisture and into clay soils to loosen the soil and improve drainage. Sphagnum moss is also used as a liner for hanging baskets of plants.

Perlite helps aerate the soil, hold water and keep soil from packing down. Made from super-heated volcanic glass, it looks like small, white pieces of popcorn. It’s not recommended for cacti and most succulents or other plants that need relatively dry soil. Perlite is good for rooting cuttings because it raises the humidity around them as it releases water. It’s also good for epiphytes, plants that like high humidity and need to dry out quickly after they’re watered.

Homemade compost can be made from brown leaves, untreated grass clippings, eggshells, coffee grounds, fruit and vegetable scraps and other organic matter. As the materials decay, they add nutrients to the soil. They also help hold moisture and encourage good soil microbes that help plants grow. Although compost has nutrients, plants usually need fertilizer, too, depending on what you’re growing.

You can buy compost, which is often made up of leftover products from forestry operations, such as fir bark. Commercial compost can also contain coco fibers, pumice, sand, bone meal, feather meal, worm castings, manures and other organic materials.

What to Look For in Potting Soil 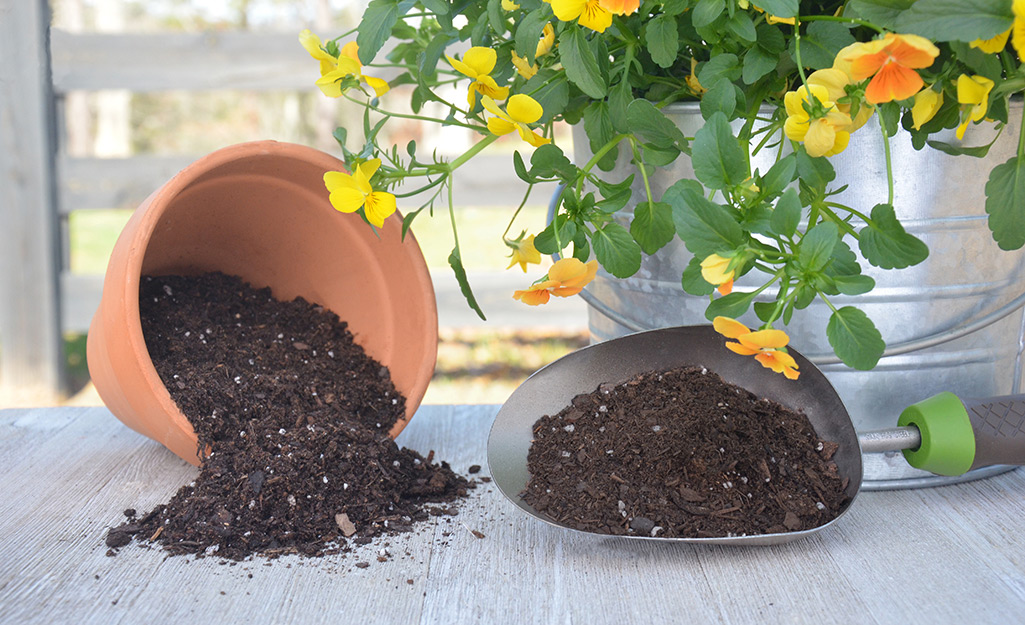 Potting mixes are often called potting soils. We'll use both terms here, but they’re not exactly the same. Some potting soils really are soils, not mixes of materials. They're not recommended for plants in planters or other containers. If you’re growing plants in pots, choose a product labeled for container or potted plants.

Also, look for a potting soil that has a loose, crumbly texture. Heavy, dense potting soils can hold too much moisture, which means oxygen can't reach plant roots. This can cause roots to rot and give mold a chance to grow. Avoid potting mixes with big chunks of bark or wood. 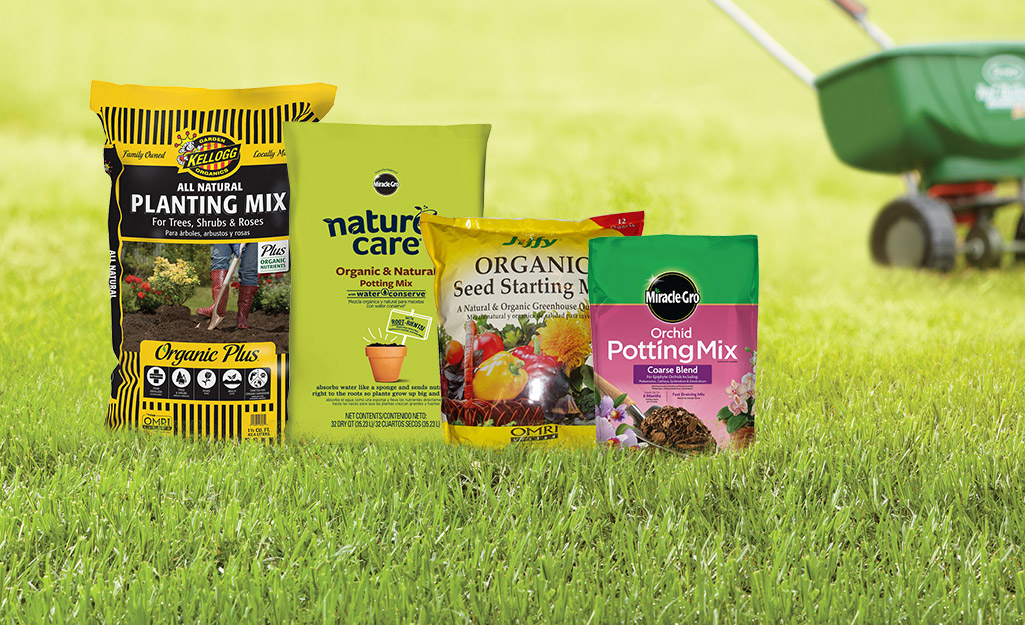 Some potting mixes are designed for certain types of plants, such as orchids or succulents. These differ by the kind of materials they contain and how dense they are.

All-purpose potting soil: This product is good for most indoor and outdoor container plants. It's usually the best potting soil for new container plants or repotting plants. It may or may not come with continuous-release fertilizers (fertilizers that slowly release plant food over a period of time) and moisture control pellets (pellets that help prevent overwatering).

Organic potting mixes: These are made from carbon-based matter, such as worm castings, manure, compost, bone meal, fish meal and other once-living things. If you're growing organic vegetables or herbs in pots, you may want to add organic fertilizers to make the best organic potting soil for your edible plants.

Seed starting mix: This very fine, sterile, soilless mix helps seeds germinate and cuttings form roots. It’s low in nutrients, which encourages roots to grow and branch out in search of food. Once seedlings and cuttings have good root systems, they should be repotted in a mix that provides nutrients. Seed starting plugs and pellets are also available.

Orchid potting mix: Most orchids need good air circulation. They also need a growing medium that holds moisture but drains fast,  so their roots don’t stay wet. Orchid potting mixes may contain fir bark, sphagnum moss, charcoal, coco fibers (sometimes called coco coir), perlite or a blend of these materials. Some orchid mixes are made for different types of orchids, such as dendrobiums or phalaenopsis, also known as  moth orchids.

Outdoor potting mix:  Some of these mixes are labeled for use in indoor and outdoor container plants. They often contained aged wood fibers and give plans the same basic benefits they'd get from growing under the trees in a forest. Some have added fertilizers and moisture control pellets.

Eventually, nutrients in the soil will be used up, leaving your plants “hungry,” so replace your potting soil regularly or blend half of the old soil with fresh potting soil when you repot. You can also refresh old potting soil with compost, vermiculite and a continuous-release fertilizer. Don’t reuse the potting soil if your plant was diseased or had insect pests.

Choose the best potting soil for your plants based on the kinds of plants you’re growing and whether they're in containers or the ground.

Some potting soils are made for specific types of plants. Others are made for starting seeds or rooting cuttings. Potting mixes come with or without continuous-release fertilizers and moisture control pellets. You can add soil amendments such as composted manure to refresh or enrich your potting soil mix.

Looking for a product, tool or mateial? Use our mobile app to search by voice or image.

How to Prepare Soil for a Garden

How to Test Soil pH

How to Improve Soil in Flower Beds