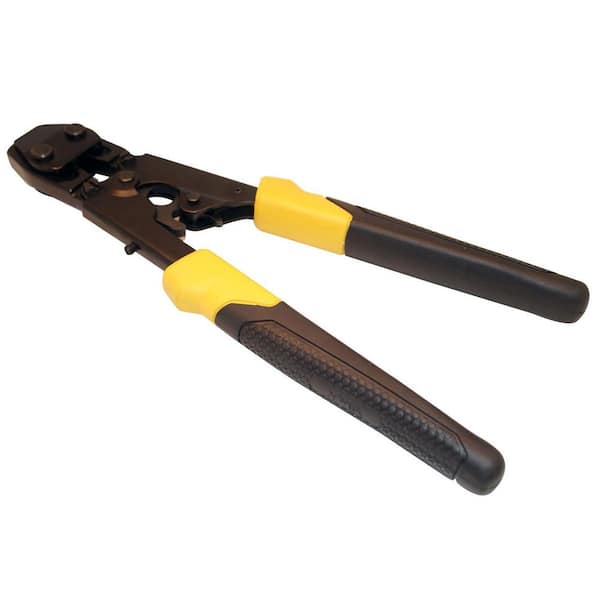 The Apollo PEX Quick-Cinch Clamp Tool is compatible with 3 sizes of stainless steel crimp rings. Tool does not release until the fasten is complete. Ratcheting action to complete crimp.

Manufacturer Warranty
5 Years: From date of purchase and when used in accordance withinstructions.

17
Filter by:
Showing 1-10 of 80 reviews
Sep 11, 2018
Good
Good
by
1 person found this helpful
Dec 15, 2013
Best PEX Crimper yet
I've been using a ZURN crimper for many years and was always looking for something easier to use. This new crimper uses newer rings that are so much easier to us, and the tool takes up so little room and works perfect in tight areas. The other is you can crimp all sizes with the same tool. I would recommend this to anyone that has used pex in the past and if you have another job, this thing is the best and it's cheap. I spent over 100.00 for the Zurn back in 2005 and it only crimps 1/2". I added the photo of the manifolds using 1/2" and 3/4" rings. And these can easily be removed. Not so with the copper rings.
by
8 people found this helpful
Oct 18, 2021
Works exactly as expected....
Works exactly as expected.
by
Sep 21, 2021
by
Jul 10, 2021
Rating provided by a verified purchaser...
Rating provided by a verified purchaser
by
Mar 19, 2021
Very poor design
Absolutely horrible design! Don't not buy. Very difficult to use with someone else holding the pipe because when they are open the handles are way too wide. Hopefully I can return them.
by
Feb 1, 2021
This tool sucked.
Hard to get into tight spots and unreliable.I had to go back and fix alot of joints even though the go nogo tool said it was a go.
by
Dec 2, 2020
Crime adjuster failed
This a typical cheap chinese product. The compression adjuster slips every time it is squeezed, causing the compression to be less than required. The shark bite brand at Lowe’s is made in USA and only 18 more dollars.
by
Nov 12, 2020
PEX tool
First time using PEX. these crimpers work really well. no leaks.
by
Jul 5, 2020
it worked but it took effort
First of all, for the price, the quality is very poor. I had to tighten the head screws because the head part was too loose. It caused the ratchet part to jam. Once it was tightened properly, it worked smoothly. Second, if it needs calibrated, there’s no instructions provided with the tool. I had to research it online. The instructions that I found from Apollo aren’t accurate. I followed the instructions exactly and the tool still tightened the clamp too much. Third, the tool cannot be calibrated exactly to the recommended specs anyway. The retainer screw doesnt allow it. I ended up breaking the adjustment screw because of it. At that point, i just used the tool anyway and used the calibration gauge that was provided, to measure the gap in the clamp instead. I didn’t have any leaks, so it worked. If there’s better options I would recommend that instead.
by
1 person found this helpful
Showing 1-10 of 80 reviews

RYOBI introduces the 18V ONE+ Lithium-IonRYOBI introduces the 18V ONE+ Lithium-Ion Cordless PEX Tubing Clamp Tool (Tool Only), the industry's first battery powered PEX Pinch Clamp Tool. With cordless convenience, complete up to 400 clamps per charge using a RYOBI ONE+ P108 4.0 Ah LITHIUM+ Battery (not included). Complete clamps with ease and efficiency with one button activation and an LED light indicating a complete clamp cycle. The 18V ONE+ PEX Pinch Clamp Tool fits all PEX clamps ring sizes so no job goes unfinished. Dual LED lights illuminate the workspace and the included belt clip make for ultimate portability on the jobsite. Innovation meets function for the ultimate jobsite solution. Best of all, it is part of the RYOBI ONE+ System of over 225 Cordless Tools that all work on the same battery platform. Backed by the RYOBI 3-Year Manufacturer's Warranty, the PEX Pinch Clamp Tool includes a go/no-go gauge, a belt clip, and an operator's manual. Battery and charger sold separately.See Full Product Description

The versatile SharkBite 3-Handle Full-SizeThe versatile SharkBite 3-Handle Full-Size Clamp Tool clamps 3/8 in., 1/2 in., 5/8 In., 3/4 in. and 1 in. stainless-steel PEX clamp rings onto PEX tubing (clamp rings not included). The 3-Handle design allows for one-handed gripping keeping the other hand free to hold a flashlight, ladder or pipe. The SharkBite PEX Clamp Tool compresses the stainless steel clamp ring to barb fittings creating a watertight seal. The clamp tool will not release from the clamp ring unless a properly-secured connection has been made. The tool is factory calibrated and all clamp connections conform to the ASTM F-2098 standard.See Full Product Description