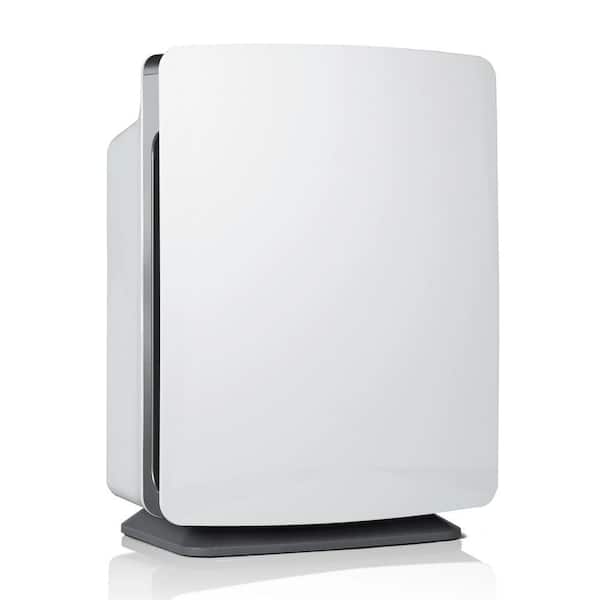 Alen BreatheSmart FIT50 is a compact, yet sleek air purifier, standing at under 2 feet tall, the FIT50 out performs others by it's powerful filtration. Perfect for larger rooms, FIT50 cleans an impressive 900 SqFT. 2X an hour! Equipped with a medical grade H13 True HEPA filter that captures 99.99% of airborne particles up to .1 microns. FIT50 has one of the largest air filter compartments of all the Alen BreatheSmart models, and a triple air intake for massive airflow - made to eliminate those tough airborne allergies like dust, dander, dust mites, pollen and pet fur and deliver fresh, clean air. The FIT50 features a SmartSensor connected to a 3-color LED display that shows the air quality in real time and it has an auto-feature that adjusts the fan speed for worry-free air! FIT50 is made to operate continuously built with a long-lasting filter for 9-12 months of 24/7 air purification. Alen cares about clean air and is on a mission to solely create sleek air purifiers that are made to last a lifetime - your lifetime.

4
Filter by:
Showing 1-10 of 407 reviews
Jul 15, 2020
Lifesaver with great design
Very happy with my purchase! Got the FF50-VOC filter with the FIT50 and it worked great for what I was looking for. Our house was being remodeled for months, and I was having asthma attacks everyday & especially at night due to the construction dust. With my new air purifier, I was able to sleep through the night without waking up due to asthma as I had been for weeks - lifesaver! Later we found out that our ducts were completely clogged and that's why the air quality was so bad in the house, but the FIT50 really helped me to sleep during that time and not feel like a zombie during the day. I've also used it in the kitchen when frying or cooking, and noticed that it filtered out the smell pretty well. Love the auto feature - it detects the air quality and sets it as needed - I don't have to guess what setting it should be on. And I like the different light indicators for poor quality and good quality air - very happy to see that blue clean air light after being red! Lastly, I didn't have a problem sleeping with it at the highest setting, in fact it was helping me to sleep, so noise didn't bother me. There's a hum of course, but it's not bad at all. And to top it off, I got the wood grain design to match our log house, and absolutely LOVE how it looks!
by

Customer review from alencorp.com
Jun 20, 2022
Grateful for purified air!!
We love the air filter. Quiet, adjustable, and has made a big difference in the quality of air in our home.
by

Alen BreatheSmart Classic air purifier forAlen BreatheSmart Classic air purifier for large rooms, open concepts, and big spaces. It effectively cleans the air twice an hour in up to 1100 SqFt. Paired with a medical grade H13 True HEPA air filter that captures 99.99% bacteria, aerosolized viruses, and airborne particles larger than 0.1 microns essential for trapping allergens like pollen, dust, dander, dust mites, and pet fur. Equipped with an air quality sensor, the power button changes colors, showing off 3 distinct LED colors so you never wonder if it's working. BreatheSmart Classic has tactile buttons and is simple to operate, run the unit on auto mode and the sensor sends a signal to the fan to power up or down, sensing the air quality in real time. To activate sleep mode, push the power button once, and the lights shut off. Rest comfortably at night as the BreatheSmart Classic cleans the air you breathe at a whisper-soft volume. Made to look good in your home, the stylish design and sleek panels come in a variety of colors and textures to blend on or stand out. Alen is on a mission to solely create effective air purifier solutions for homes, businesses, schools, or any space where air is shared with others. Alen cares about clean air, wellness and safety and backs their products with a Forever Guarantee.View Full Product Description

The Coway Airmega 400 air purifier efficientlyThe Coway Airmega 400 air purifier efficiently filters harmful sources in your space and captures 99.999% of nano-sized particles down to 0.01 microns, which is smaller than most allergens, bacteria, mold and viruses. With coverage of up to 1,560 square feet, Coway's three-stage HyperCaptive filtration system (with Green True HEPA filter) wraps any space in clean air, 24 hours a day. Features filter change indicators, Smart Mode (that adapts the air purifier to its surroundings), and real-time air quality monitoring.View Full Product Description

Alen Breathe Smart 75i large room air purifierAlen Breathe Smart 75i large room air purifier offers advanced air purification technology, is designed with ingenuity and available with a True HEPA H13 air filter that captures 99.99% of dust, allergens, aerosolized viruses, chemical and pollutant particles to 0.1 microns. Essential for air purification in a large living area, 75i purifies up to 1300 SqFt of air every half hour. Built with a powerful motor, yet it's extremely quiet as it'd fan has been finely tuned to operate at library-quiet levels. With modern styling lines and neutral color options, 75i can blend perfectly into the room decor. Equipped with the B7-Pure AM True HEPA (H13) air filter for powerful filtration of allergens, pollen, dust, mold, bacteria, fur and more. Take advantage of Alen's limited lifetime warranty, start breathing better today with Alen Breathe Smart 75i.View Full Product Description