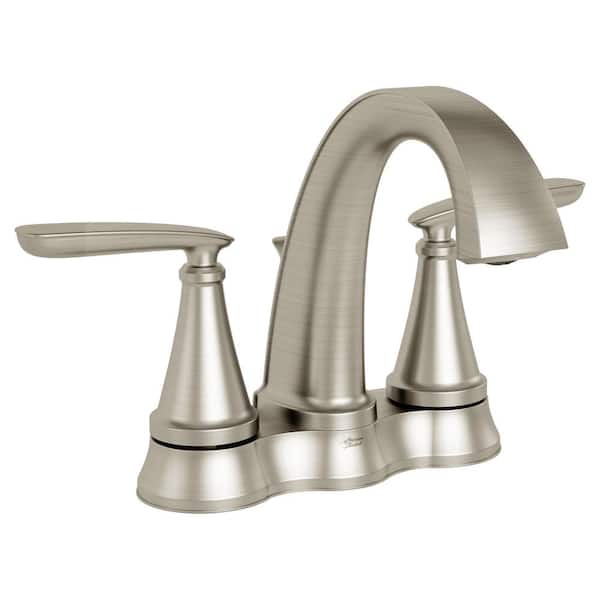 Is the drain assembly metal?

Diane, I am sorry but this drain is plastic. Sincerely, your American Standard Consumer Connection Team

Is the deck on this faucet metal or plastic? Does it comes with a rubber gasket to ensure snu...

The deck of the American Standard Somerville faucet is metal, there will be a plastic escutcheon plate at the base. However we still recommend using plumbers putty around the base to seal against water getting underneath the sink. Your American Standard Consumer Connections team.

Are there tub fixtures in this design to match? Hot / Cold & converter?

Yes. I believe there is. Search Summerville collection on the Home Depot website and you should see everything in that collection that is offered.

1 person found this helpful
Jul 14, 2018
Sumerville Centerset Faucet To want to change out a small bathroom’s, small vanity faucet for the upgraded and more modern look of the Sumerville is a bit of a challenge for my 200 lb. frame, but I “got er done.” In fact, it took longer to remove the old faucet assembly from under the smallish vanity than to install the new Sumerville Centerset faucet assembly. I also chose to purchase new flexible water supply lines rather than deal with the old ridged ones. That made the job much easier. The Owner’s Manual is one in the same with a large fold-out clearly illustrated installation instruction sheet. A part/sub-assembly number section for your retention is also illustrated on this fold-out. In addition, this sheet describes the limited lifetime function and finish warranty for the original consumer. A help hot line number is also provided. If I had an issue, it would be with the EPA because at 1.2 gallons per minute, the water flow of the new unit is about half that of the old antiquated one we replaced, but that’s the government for you. However, we’ll be using 40% less water which overall is a good thing. Bottom line is the new Sumerville style looks and operates great. In addition, its discharge spout is about 3 inches higher over the sink than our old one was, so you don’t have to bend over as much to wash your hands and such. I like that feature of the design very much.
by ColdBlue

2 people found this helpful
Jul 5, 2018
If you are replacing an older faucet, you will likely spend more time removing the old faucet and...
If you are replacing an older faucet, you will likely spend more time removing the old faucet and drain assembly than it takes to install this faucet / drain assembly. Note that I had to run back up to Home Depot to get new faucet connectors. My older faucet was installed in the 80’s and it was connected with rigid copper pipes. I like the elegant look of this faucet and the smooth quarter turn handle operation. I plan to purchase a couple more to update another bathroom. Some “issues” I had with the installation were: • Not very clear on whether drain should be up or down when attaching the pop-up rod or the proper placement of the pop-up rod when making the connection to the extension rod below. • If 2 screws could be used to attach the pop-up rod to the extension rod, the whole up/down operation would be smoother. Instead the rod seemed a little flimsy and would easily turn when being used. If the pop-up rod was straight, this would not be an issue. However, it has a slight bend to it as you can see in one of my pictures. • Every video I’ve seen on installing a drain assembly showed either plumbers putty or silicone being placed between the sink and the drain. The instructions did not mention to do that so I didn’t. There is a rubber gasket there to prevent any water from leaking around the drain plug. • The drain pipe could have been slightly longer. Even another ½ inch would have helped in my installation. You may not have any issues. Home Depot does sells and extension pipe that will add a few more inches to your drain pipe if needed (1-1/4 in. x 6 in. Polypropylene Tailpiece Extension Tube). My 4 rating on installation is based on the installation “issues” I had, but I would purchase this same faucet again.
by Sambo

The Glacier Bay Marx 4 in. Centerset Two-HandleThe Glacier Bay Marx 4 in. Centerset Two-Handle Bathroom Faucet in Brushed Nickel has a sleek, simplistic modern design that will complement any bathroom decor. WaterSense certified, this faucet has a 1.2 GPM flow rate to help reduce water use and ceramic disc cartridges to prevent drips. The high-arc spout provides ample washing space, while the beautifully styled handles allow easy and convenient control of water flow and temperature. Featuring the ClickInstall drain for quick and simple installation. Pair this faucet with other pieces in the Marx Collection (sold separately) for a complete modern look for your bathroom.See Full Product Description