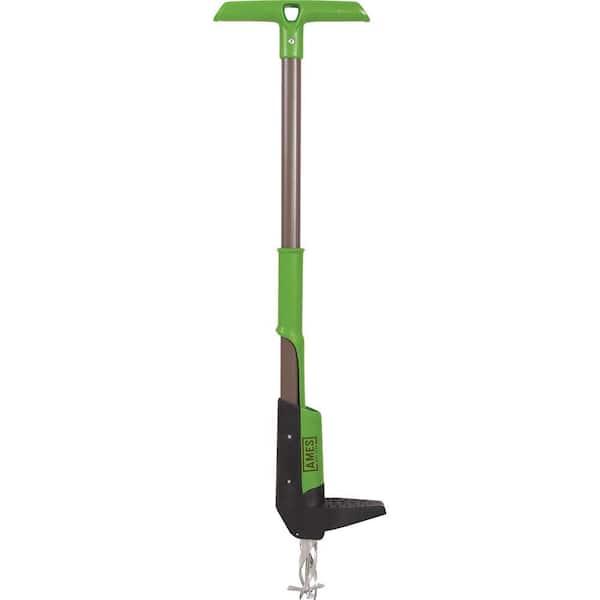 Tired of spending hours in the yard pulling dandelions? You can rest a little easier thanks to this innovative weeding tool -- a stand-up weeder that removes weeds by their roots quickly and easily. No bending, chemicals or divots of damage to your turf when you use this weeder. It performs double-duty by also aerating the soil for a healthy lawn.

7-1/8 in. Stand-Up Gardening Weeder for Weed, Root and Dandelion Removal

Remember when you could pull weeds withoutRemember when you could pull weeds without pulling your back. It's time to simplify your yardwork with a WEN Stand-Up Weeder. This 40 in. weeder provides a fast and efficient weeding solution for gardeners, home owners, landscapers and other lawn care professionals. Operation is easy: simply position the 4 steel prongs above your targeted weed, press the foot pedal and pull. No more bending and no more back aches. This is the perfect tool for extracting deep roots, dandelions and more. The ergonomic grip combines with the lightweight 2 lbs. design to limit fatigue during long days in the garden. And because it's a WEN Product, your weeder comes backed by a 2-year warranty, a friendly customer service line and a stocked inventory of replacement parts, all to make sure you remember WEN.View Full Product Description

Remove pesky weeds in hard-to-reach placesRemove pesky weeds in hard-to-reach places with Corona's EXTENDED REACH 2-Prong Weeder with ComfortGEL Grip. This 40-inch weeding tool provides added reach to reduce bending and squatting and lessen strain on your neck and back. The weeder's heat-treated steel head is designed for enhanced strength and durability, while its sharp, fork-tipped blade easily cuts and slices through deep-rooted weeds. Reach for the Corona EXTENDED REACH 2-Prong Weeder with ComfortGEL Grip to keep your lawn or garden looking exactly how it is supposed to be: weed-free.View Full Product Description

The SKIDGER Xtreme Weeder can replace allThe SKIDGER Xtreme Weeder can replace all other weeding tools. Its pointed edges are sharpened inside and out for pushing and pulling, clearing weeds quickly and easily. It weeds beneath drip lines, under fences and gates, between plants and extracts weeds from lawns and ground cover. It also creates furrows for planting and irrigation water.View Full Product Description