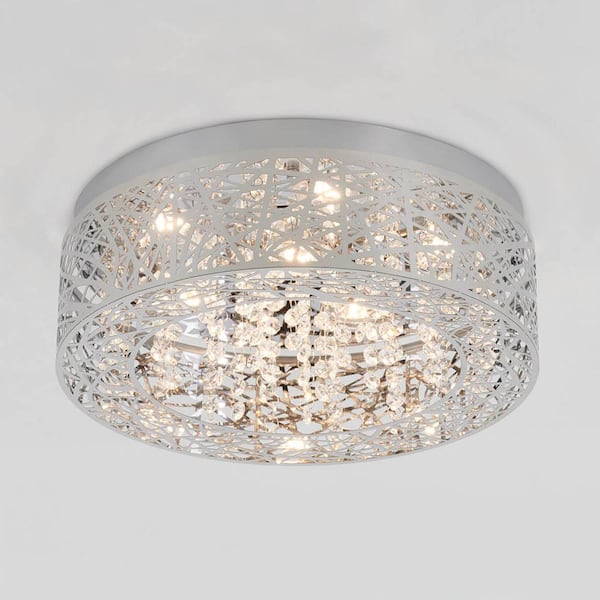 Add some sparkle to your home by installing the splendid crystal nest. This decorative ceiling light gives a unique touch to your living environment thanks to the aesthetics of the motifs surrounding its large chrome-finished stainless steel reflector. The shading effects that result allow this fixture to shine throughout your home. In addition, the multitude of glass crystals placed in the center of this luminaire brings a big boost to your interior. The crystal nest does not only shine by its elegance, it is also energy efficient. ENERGY STAR approved, this LED light gives you the opportunity to reduce your electricity bill while increasing the character of your home. Accentuate the beauty of your layout with this model of a very safe taste.

Can this be mounted in a can light ceiling fixture?

Can you please clarify your question?

Is there an installation guide. Didn't know how to install crystals.

It comes with instructions. The crystals hang in rows of about 4-5 with a small hook at the top.

Can the light bulbs be changed? What kind are used if need to replace a bulb

The LED lights are integrated, there are no bulbs in this fixture.

Would this be good for a kitchen?

Sure! The light is extremely bright. Your kitchen will be well lit with it.

What dimmer switch would you recommend with this product. My electrician has tried 2 different on...

What's the wattage on this?

26 watts. The lights come pre-installed though and are 1820 lumens. It is a fairly bright light but is more of a warm than a blue light LED.

Apr 16, 2021
Gorgeous light
Fabulous light! Tons of compliments on it from the neighbours. Bought 12, put up all over the house. Elegant, on trend, great price, very happy.
by Happy Home Depot Customer
Response from Artika supportApr 19, 2021
Thank you for the feedback!

Customer review from homedepot.ca
Jan 11, 2021
Mounting issues, decent light
I’m not complaining because I can’t mount a light. The light itself is good but the mounting bracket is absolute garbage in my opinion. Because the light is wider the company opted away from a normal ceiling fixture mount bracket with thread and bolt, and instead gave two drywall anchors and two screws. Firstly, there’s four ends because it’s round, why only two (I know might be enough to support the weight but to evenly distribute the weight you should have four, one for each end). Secondly, my house has fire separation on the second floor via metal sheeting. I can’t install drywall anchors and screws in there. I had to use the ceiling mount bracket from the original fixture to install it. It holds fine, but because the light is wide there’s a bit of flex down at the end. Whichever engineer designed this light was looking for the lowest cost to production.
by Aaron

Customer review from homedepot.ca
Jan 2, 2021
Elegant and bright
Beautiful, sparkly light. Good quality and easy to install.
by Vanheather
Response from Artika supportJan 6, 2021
Thank you for the feedback.

Customer review from artika.com
Aug 24, 2020
Beautiful light with no bulbs!
Love the look (sleek and stylish) and the white LEDs. Bought 2 and will be buying a 3rd. Granted it only lasts as long as the LEDs do but my rough estimate if it’s on 24 hrs a day is it’ll last 5 years. Hope I can get 5 out of it!
by PamG
Response from Artika supportSep 15, 2020
Thanks for the feedback! We are pleased to hear that you are happy with the fixture.

Customer review from homedepot.ca
Aug 10, 2020
Love it!
Bought this light for my bedroom and LOVE it! It’s so pretty and the designs on the side show the light through it.
by Kendra
Response from Artika supportSep 15, 2020
Thanks for the feedback! We are pleased to hear that you are happy with the fixture.

Customer review from homedepot.ca
Jul 16, 2020
Beyond Beautiful & Bright!
Exceeded my expectations! Easy install. The glass beads take a bit of time to hang but worth it. VERY bright. We installed a dimmer switch with it. Very elegant! Glass beads create / reflect a pretty pattern
by NancyG