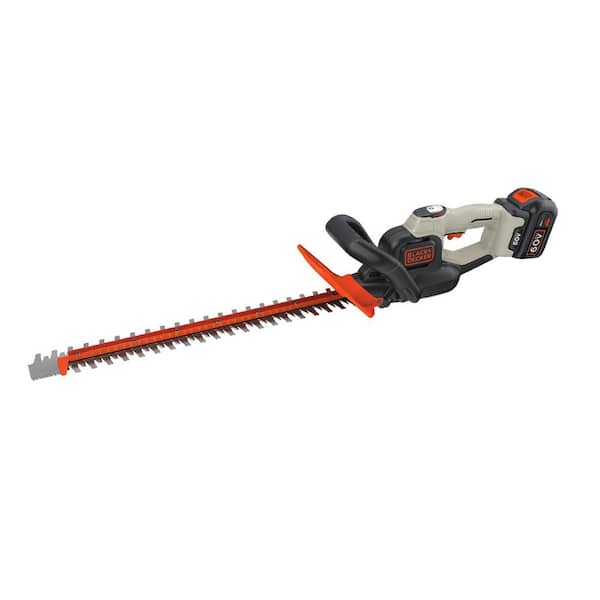 Trim hedges, shrubs and branches up to 1.5 in. thick with no extension cord to get in the way. This tough 60-Volt MAX cordless hedge trimmer powers through jams with the push of a button. Designed to deliver comfort and control while you work.

Customer review from blackanddecker.com
Dec 21, 2019
60V Trimmer
I like the trimmer. It has great power and lasts pretty long. My only complaint is that the battery light to check how much power is in it already stopped working.
by

Customer review from blackanddecker.com
Sep 22, 2019
Strong as an electric plug or gas
Bought this because i got tried of a corded hedger and needed something to cut at least 1 inch branches. This cuts through branches with no issues, but the end of the saw is useless. I have not been able to use that sawblade effectively enough to use it on jobsites and say it saves time. Also i wish the handle rotated like other brands did for use of ease, but i manage due to the weight being fairly light.
by

Customer review from blackanddecker.com
Sep 6, 2019
Good Value And Quality
I needed to get a lighter trimmer than my gas powered one and this is just what I was looking for. It does the job, is light weight and no more gas and will it start problems. My hedge is thirty feet long and this trimmer has the power for the job.
by

Customer review from blackanddecker.com
Aug 24, 2019
Hedge trimer
I have a 40 volt charger and hedge trimmer. It cuts perfect. I have used it up to 90 minutes on one charge The blade is a nice length - 24inches long. It cuts hedges, weeds, and small tree limbs easily. I could not do without this trimmer
by

Customer review from blackanddecker.com
Aug 22, 2019
The easiest fastest way to trim!
Used one at my parent's home, and had to own one of my very own. This is the best, and my always go to item from Black and Decker product I own for 7 months of the year! I own almost every single product in every category of Black and Decker. I only buy B & D products!! They stand behind the item, always helpful, and very friendly staff to deal with! Above average company in today's marketplace!
by

Customer review from blackanddecker.com
Aug 8, 2019
Lite
Used to trim all hedges and other trees around the house,did everything well and was lite and very easy to use.
by

Customer review from homedepot.ca
Jun 4, 2018
Gets the jobs done
Great unit. It does a great job and recharges very fast
by

Customer review from blackanddecker.com
May 22, 2018
The tool is great and saves time. It is powerful...
The tool is great and saves time. It is powerful enough to cut stiff stems and advertised. I am not so enamored with the small saw on the end of the blade.I have not had much luck with it. It struggles. i would prefer it not have one.
by
Dec 3, 2017
GREAT TRIMMER
Purchased this trimmer earlier this year (2017). I have 440' of tree/hedge/brush line across my rear property line that I trim twice a year. This trimmer has made the job easier than ever to get the job done. It cuts through the thick stuff as advertised with no problem. The saw feature on the end of the bar does a good job on the thicker stuff. The battery has great run time! I could probably knock out the entire hedge line in one day on one charge, but this 60 year old dude gets a little worn out after a while. It does have some weight to it, so after trimming for awhile (over my head, too), and picking up the trimmings, I do half one day and the other half the next. If I had to say anything negative about this trimmer, I would say 1). the weigh and 2). It would be nice if there was a trigger lock device. Other than that, I highly recommend this trimmer!
by

The DEWALT DCHT820B 20-Volt Max Hedge TrimmerThe DEWALT DCHT820B 20-Volt Max Hedge Trimmer has a high output motor and laser cut, hardened steel blades engineered for clean, fast cuts on branches up to 3/4 of an in. thick with 22 in. of blade length. The compact and lightweight 7.5 lbs. design maximizes maneuverability and minimizes stress on your arms. (Bare tool: battery and charger sold separately).See Full Product Description