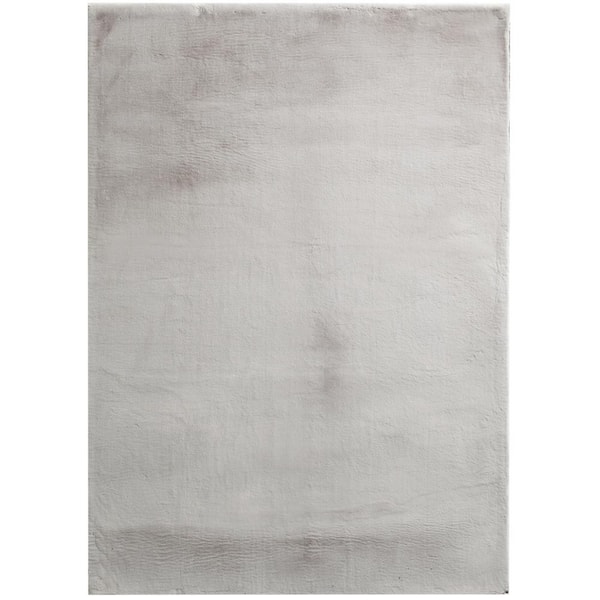 Upgrade your living space with the Bazaar Piper 5 ft. x 7 ft. Area Rug. This rug features a velvety soft pile offering a cozy surface beneath your feet. Piper comes in a solid natural color to complement any home decor. The super soft faux fur fiber is rich and luxurious.

I love this rug. We’ve had it for less than a year and I’ve noticed that the high traffic areas h...

So I would try spot cleaning the rug and brush the fibers. Here are two articles from the internet I found HOW TO CLEAN A POLYESTER RUG ________________________________________ Polyester rugs are a great affordable option for any design style. From shag to flat weave a polyester rugs are rich in color and beautifully designed. You may be wondering, “Are polyester rugs easy to clean?” The answer is yes! Properly caring for your polyester rug is easy and important for extending the life of your rug. Follow these tips on how to clean a polyester rug. MAINTAINING YOUR POLYESTER RUG Remove dirt and spills quickly so they don’t have time to set in. SHAKE YOUR RUG • Firmly hold the corners of the rug while you powerfully shake it. Continue shaking until dirt and debris stops coming from the rug. • If your rug is too large to shake by yourself, hang it over a railing, fence or clothesline. Then give the rug a good whack with a strong stick. Hit both sides of the rug to ensure all dirt is removed. VACUUM Vacuum your polyester rug frequently to keep dirt from staining the rug fibers. Vacuum both sides of the rug every few weeks to help loosen dirt and debris. Rugs in high traffic areas should be vacuumed multiple times a week. If you’re wondering how to clean a polyester shaggy rug with the vacuum, it’s simple. Just disable to beater bar on your vacuum and vacuum it with suction only. HOW TO SPOT CLEAN A POLYESTER RUG If your rug only has a few areas that need to be cleaned, spot cleaning is a great method. • Remove any excess moisture or debris from the spot. • Blot liquids (like urine or wine) with a clean towel. If the stain has dried, use the edge of a utensil to remove solid debris. • Mix together water and a small amount of mild detergent. • Use a clean sponge to blot the spot with the detergent water. Be sure not to rub as this can drive the stain further into the fibers. • Clean the sponge and repeat until the stain is gone. Then rinse the rug with clean water until all the soap is removed. • Make sure the rug dries completely on both sides before you put it back in place.

How do you clean it?

How does this rug hold up long term like 6 months to a year at least?

Why does it get hard after a month of use? It feels like hay now.

Maybe you just don’t maintain it well? I’ve had mine for 3 months now and it’s still plush and feels like new

Slim to Nil chance of an answer BUT does anyone know if ANYONE else makes this rug TRUE TO SIZE 8...

Has anyone used a vacuum like the iRobot on this rug? Or another brand robot vacuum? Can you not ...

The Rhoomba I have gets stuck on these carpets. I use my upright for them. Small price to pay for how soft these are to the touch.

I just got this rug. Two questions- how do you vacuum this rug? If there is a spill what is the b...

You can use a regular vacuum that can adjust to a slightly thicker pile setting. Definitely suggest hand washing or some suggest a delicate cycle in your washing machine and air drying. Personally, I’m Not sure how this would hold up in the wash but also suggest to google it. There’s a lot of tips that people have shared on how to clean these and because this is a shorter pile faux fur rug, I feel like it’ll be much easier to hand wash than those with very long faux fur (requiring you to actually brush them as well).

I thought I saw this in a very light pink at one point? Will that be an option again?

Hi KT Currently, these are the colors the vendor is offering. We do not have a way of knowing what colors/styles vendors may offer in the future. You can try searching by color and see if there is another light pink rug.

When will the blue in 8x10 be available again? Can it be ordered through the manufacturer?

Yes I bought mine last week

Is there a way that I can make it soft again after using it under furniture?

I'm not sure but maybe try vacuuming it a few times so the fibers come back up to normal.