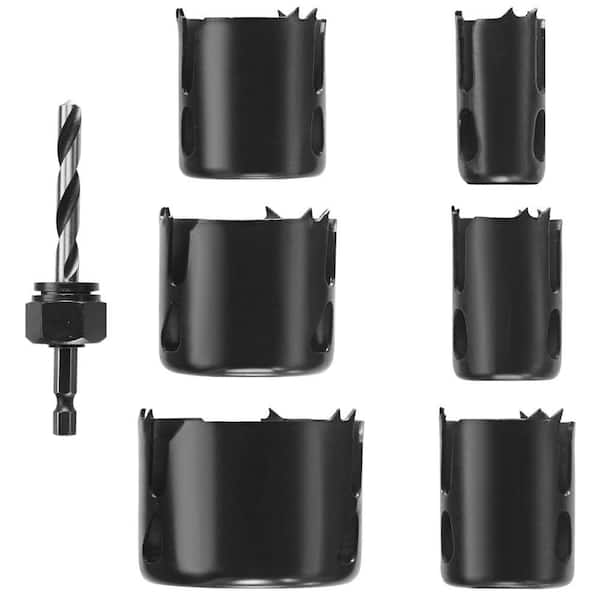 Bosch Daredevil Wood Hole Saws are specially engineered to be 5X faster than standard wood hole saws, using Bosch's exclusive Turbo-Teeth design. This exclusive 2-tooth pattern delivers faster drilling and longer life. These hole saws provide best-in-class results in wood and plywood applications. They have large chip clearance slots for easy plug removal and their deep cup design was made to be the ideal choice for 2s X 4s. The Daredevil Wood Hole Saws have an integrated arbor and pilot bit for use right out of the package.

Replacement bit? None of the universal ones seem like they will work? mistakenly used these in an impact drill.

Dear Bosch - your customer service is useless Look at the arbor and hole pattern in the saws. They are NOT around. It has a pattern like a pill (flat sides and round top and bottom). The replacement Arbor/mandrels all have a ROUND pattern. Seems mike you used a proprietary mandrel/arbor for the set without offering a replacement?

What sizes are in the Bosch set?

The arbor has a mounting "nut" assembly. Just loosen this nut, change saws, and install nut to hold the arbor in place.

Does it provide smooth cut holes in wood? This is very important to me. Thank you.

I used one to cut two holes in a new countertop..... worked great. I would just recommend starting the drill out slowly on the counter top to prevent "chipping" of the surface.

Can this be used to fix a hole in my bedroom door.

Does this cut plastics, in particular, acrylic sheets?

I used this on a composite shower I installed and it was great. hope this helps

Can these be used to cut holes in drywall?

Yes. I just redid a bathroom and used these for drywall, wood, and the composite shower wall. I was very pleased they worked fine and no issues

HI, Can this be used to drill holes in rain barrel and pvc?

Whats the recommended RPM for these?

Used my Rigid electric drill at 600 rpm, and it worked great.

1 person found this helpful
Apr 26, 2016
Decent set
So far I've used the 1" and 2-1/2" hole saws. They both made holes in 2x lumber - treated and untreated - in a decent amount of time. The back of the holes were a little messy as there was some splintering around the edges, so some sanding may be necessary. The plugs were easy to pull out. Complaints: The arbor nut came loose a few times which required stopping mid-hole to tighten it. It also would have been nice to have included a little canvas bag or something to keep these organized. Granted, the whole package is pretty compact as the hole saws all fit inside one another, but if you toss them in a tool bag, they all come out.
by Erick

Apr 18, 2016
Great for quick penetration in 2x4 faces
The Bosch Daredevil wood hole saw 7-piece set includes 1 in., 1-1/4 in., 1-1/2 in., 1-3/4 in., 2 in. and 2-1/2 in. hole saws. The set also comes with with arbor and pilot bit hardware so there is no need for additional hardware purchase. The bits excel at cutting through 2'' framing material such as studs, joists, etc. I found the bits to cut extremely well and they are fast. Clean out is a breeze as long as the material is 2'' thick or less. Anything thicker fills up the bit to the point where all of the openings are closed by debris making it a difficult to clear.
by schlafe

1 person found this helpful
Apr 12, 2016
Nice Upgrade for the Tool Box
This is a good set of hole saws that makes quick work of cutting through wood. The arbor is very easy to remove and allows you to switch between different sizes fairly quickly. However, I did find that the arbor nut worked its way loose every once in a while, even when tightened with a wrench. The holes were pretty rough around the edges when working with ¾” plywood, but that’s to be expected with a veneer. On 2x4s it was a much cleaner end result. It was definitely easier to get the wood plug out than with my other hole saws that have teeth all the way around the perimeter. This set is definitely an upgrade over my older saws, my only real complaint is that they don’t include any sort of case for storage. Usually I’m not big on cases, but in this instance, it would definitely make keeping up with the hole saws and arbor easier. Overall though, a much better hole cutting experience!
by Judson

Mar 14, 2016
Fast Cutting
This hole saw set is great at cutting quick and dirty holes through 2x dimensional lumber. The triple cutter design with chip gullets that double as plug removal pry slots seems to work pretty well - I was surprised it does, since it's only got 6 teeth on the whole thing. Included in the kit are 6 hole saws, ranging in 1/4" increments from 1" diameter, all the way up through 2-1/2" diameter. The set skips from 2" to 2-1/2", so no 2-1/4" bit comes with it. The arbor is also included, but there's no case to hold everything, which would have been nice. Even with the deep chip gullets, you'll still have to back the hole saw out every few seconds for chip ejection - otherwise it will bog down and start burning the wood. The only other issue I had with the hole saws was that the arbor nut came loose a few times, even though I had tightened it with a wrench. I was a bit surprised that it's a right-handed nut, so it would tend to come loose during operation rather than tightening like a left-hand threaded one. I eventually just ended up cranking on it as hard as I could with a 13/16" wrench, and didn't have any more issues with it coming loose. I found the plug pry slots to be pretty conveniently placed, although bridging the gap between the initial bottom one and the next space up sometimes proved to be a little bit of a hassle. I found the best way to get a plug out was to work my way around to all three of the slots in order, which usually kept it from binding too much. Overall, these will get the job done pretty quickly - just make sure you REALLY crank down that arbor nut, or you'll end up with a wobbly loose bit in the middle of your cut.
by Doresoom

3 people found this helpful
Feb 29, 2016
Hole making machines
When it comes to making good holes in lumber of sheet-rock, you want something that is going to do a great job and make clean holes. This Bosch set is just that tool. The teeth are sharp and dig in to give you a quick clean cut. Having seven different sizes allows you to pick the size of hole you need rather that one size fits all. A paddle bit doesn’t do a clean job like a hole saw. Once the cut has been made it is easy to remove the plug that has been cut out and still in the hole saw. The saw teeth make fast work of any hole, in Sheet-rock it just makes dust and then the hole appears, like magic. Good set of tools to have in your tool box when you need to make a hole.
by Sandy

Feb 29, 2016
Great Hole Saw Set w/ Included Arbor & Pilot Bit
Can't go wrong with the respectable brand, Bosch. This 7-piece set is perfect from the Weekend Warrior Handyman to the Average DIY Guy to the Professional. If you need holes drilled, look no further. The included arbor and pilot bit is easy to swap between the different size. The 7-piece set includes 1 in., 1-1/4 in., 1-1/2 in., 1-3/4 in., 2 in. and 2-1/2 in. hole saws with arbor and pilot bit. I really wish this set came with some sort of bag or case to store these bits. Other than that, I have no complaints. Most holes were cleanly drilled, but might require some sanding afterwards to smooth out any rough edges. This worked great with my drill, just be sure clamp down the wood that you are using.
by MedSchoolDIY

Feb 26, 2016
Goodbye old hole saws........
For many, many years I have used the normal, traditional hole saw cutting kits. They certainly did get the job done. Now that I have used these, I will not go back. The Daredevil saws are awesome! While being super strong, the 2 tooth design really does allow faster cutting, and deeper cuts. With the old style hole saws, to cut a hole in a pine door I would have to cut both sides and meet in the middle. These will go all the way through in about 1/3 of the time, and removing the wood plug from the bit is super easy. Also, while they do warm up during use, they don't get nearly as hot as the others. These are definitely worth having in your tool box. I would suspect from the construction of these, they will last quite a bit longer than the normal, full teeth hole saw.
by