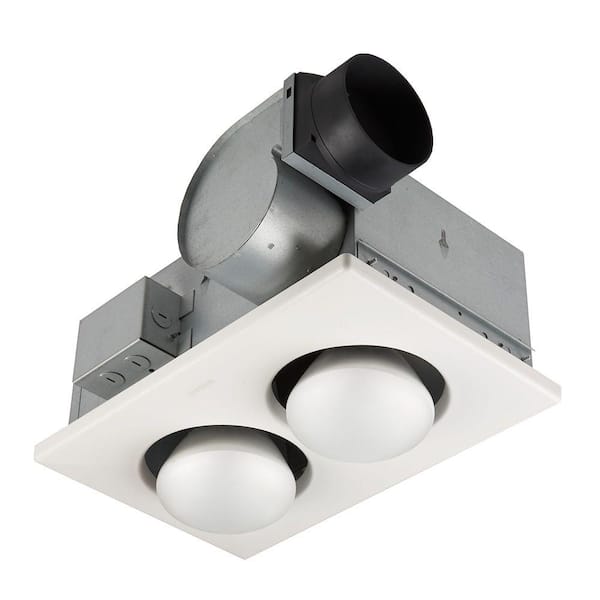 You can count on Broan Bulb Heaters and Heater/Fans for energy-saving warmth and instant comfort in the bathroom. And you never even have to touch your central thermostat. Quick and efficient, these twin-bulb heaters provide the selective temperature control you need. Each unit delivers the superior performance and quality features you've come to expect from Broan.

Customer review from broan-nutone.com
Nov 15, 2020
Long lasting
Now replacing my 164M. It lasted 14 years while I had it and I don't know long before I moved in. Never had a problem with the lights. I hope they still make them like they used to.
by

Customer review from broan-nutone.com
Jul 8, 2020
Rating provided by a verified purchaser...
Rating provided by a verified purchaser
by
Jun 8, 2020
Wow, 6 years of bad reviews and it's still happeni
We had a new home built. 2, yes 2, units went bad before we ever moved in. I bet you could count the number of times they'd been used - combined - on 1 hand. Electrician replace both units. The one in the master has gone bad again. Oldest bad review with the exact symptoms is 6 years; most recent is 1 month old. We've been in our new home 5 weeks. This is a poorly engineered product. If there was a 0 stars rating, I'd have selected it. Email? How about you email me at that address and I'll give you my phone number?
by
Response from CustomerServiceBroanJun 9, 2020
Thank you for your review of model 164. we are sorry you have had such difficulty with this unit. Please call our Technical Team directly at 1-800-637-1453. They should be able to help you troubleshoot to see if there is a simple solution to this issue. The Technical Team is available from 7:30 AM to 6:00 PM CST, Monday-Friday and would be happy to assist you.

Customer review from broan-nutone.com
Jun 3, 2020
Easy to install. Directions were accurate and adequate (small...
Easy to install. Directions were accurate and adequate (small font made me squint).
by
Apr 30, 2020
Lights quit working
Unit installed in 2016. After about 2 months the lights quit working. I finally got around to trouble shooting. All wiring is good. Fan works. Something internally that failed. Apparently I'm not the only one. I see a trend of folks reporting the same problem.
by
Response from CustomerServiceBroanMay 1, 2020
Thank you for sharing your review of your model 164. We are sorry to hear that the lights are not working! Please give our Technical Team a call at 1-800-637-1453 so we can assist you. Thank you.

Customer review from broan-nutone.com
Apr 19, 2020
Lights are too recessed, fan too noisy, cover unfi
The lights are too recessed, the fan is noisy, the cover doesn't seal to the ceiling. I bought socket extenders so more light & heat could get into the room. In the early morning, when I don't want to hear noise, I wait until I'm done, close the door, turn on the fan. It's not so noisy it bothers me in the shower. I don't know what a sone is supposed to sound like. I had assumed it was a brag about its quietness. It turned out to be a warning about its noisiness. I'm frugal, so I may prefer this to more expensive models. I'm keeping it.
by
Response from CustomerServiceBroanApr 20, 2020
Thank you for taking the time to review model 164. The higher the Sone Level the louder the unit. The Sone level of this unit should be equivalent to a conversation or background noise. If you fell the unit is operating louder than it should, please reach out to our Technical Team directly at 800-637-1453. They will be happy to assist you.

Customer review from broan-nutone.com
Apr 14, 2020
Big bad Dad
I love the unit but for some reason the fan motor quit working 2 times and had to be replaced? Menards gave me one and Broan sent me one. Haven't had a problem in 6 months now and hope the problem is resolved? The fan and lamps are installed in my new home and gets used every day when shower is used. As of this writting I would recomment this purchase.
by

Customer review from broan-nutone.com
Nov 17, 2017
So far so good!
I purchased this model to replace an older version in my bathroom. My electrician suggested replacing my old model with the same brand and make for the easiest installation. I am pleased with the fan performance and like the heat lamp for winter use. I would recommend this product.
by

Customer review from broan-nutone.com
Oct 6, 2017
A good unit, noisy, but effective
Unit was installed by a contractor on a total bathroom re-mo. It works fine as a fan and as a heat lite, but is noisy! I've been under 'the quiet ones' and there's a big difference, but none of the 'quiet ones' come with heat lamp sockets so it is what it is. I just went thru a replacement of the temp sensor on the lites. The contractor didn't wire it so the fan had to be on if the lites were on. So it got turned on without the fan and poof, out went the sensor. Only available online and not too hard to change if you have elec. experience, but not for the amateur.. It's now wired so the lites won't come on unless the fan is on. It's very odd the product label on the inside doesn't state the 'max' lite wattage, I had to go online to look it up. It's also odd the label says to use a15 amp circuit, it seems like it should be 20 amps which is what I do have. If 'another day' Broan re-designs this thing they need to strive for "quiet". That's the only reason I rate it as "average".
by
Response from CustomerServiceBroanOct 6, 2017
Thank you for your review on the model 164 bulb heater and fan unit. The ventilation fan is rated at 70 cfm's with 3.5 sones. It would be a moderate sone rating for the fan portion. The bulb heater should use two 250 watt, BR40 size infrared bulbs. The bulbs can be operated separately or together. The unit can also function with bulbs and fan controlled separately or together, and each bulb and fan controlled separately. If you have questions about the wiring, please contact our Technical Support directly at 800-637-1453. We would be happy to try to help you more.

Customer review from broan-nutone.com
Dec 21, 2016
Thermo fuse
Installed a model 164 for a customer. I am back In the attic a few weeks later and determined the thermo fuse blew. Why did it blow? It appears other customers had same problem.
by
Response from CustomerServiceBroanDec 21, 2016
Thank you for your review on the model 164. We would recommend that you contact our Technical Support Department directly at 800-637-1453. We will need to try to determine why the unit overheated. Thank you for your feedback and we look forward to talking with you and helping you with your 164.

Customer review from broan-nutone.com
Dec 13, 2016
4 164A-C units installed in my house in 1983. All still working perfectly.
Fans are getting a little noisy, but still work perfectly. Have worn out numerous,numerous bulbs. They don't have the most modern look, but I took the covers off and painted them to match the ceilings.
by

Customer review from broan-nutone.com
Nov 8, 2016
Poor Quality
I like many of the comments made have the 164 and the lights have stopped working after a month! How do you fix? I am an licensed architect and would not specify this or any Broan product!
by
Response from CustomerServiceBroanNov 10, 2016
Thank you for reviewing your 164 bulb heater and ventilation fan. Please give our Technical Support team a call at 800-637-1453. They will need to speak to you directly to get some further information from you. Thank you for your time and we look forward to your call.

Customer review from broan-nutone.com
Nov 4, 2016
Fourth Person to Discover Same Defect
I'm the fourth person writing in to report that, after initially working, the lights stopped working (fan still works). I've checked out the power, and that is not the problem. I did a continuity test on the wires, and even with bulbs in place continuity in the wiring in the box does not exist for the two lights. I bought a second identical fixture, and the continuity check worked for this fixture. So, the problem is internal to the fixture and occurs after the fixture has been used for several weeks. OK Broan - there's a common problem with your two-bulb heater/fan (model 164), AND YOU SHOULD FIGURE OUT WHAT IT IS AND TELL US HOW TO CORRECT IT. Three other reviews: "This product worked fine but now the lights have quit working" (rcorwin) … I have only used this unit for a couple of hours and now the lights do not work. The fan works but nothing else." "Extremely poor wiring and eventual problems (Wi4x4Man) … "It worked for about 1 week when suddenly both lights quit working but the fan still worked. The switches for the heat lamp and the light were providing power, and instead it was in the fixture itself." "It quit working (Allen)… "After one week of use, the lights stopped lighting. Doing some debugging I find that the current to the lights is too low and will not light the 2- 250 watt bulbs. Fan works on one switch and somehow the low current is also trying to run the fan. "
by

Customer review from broan-nutone.com
Aug 26, 2016
Great unit for the price
It was relatively easy to install. The wireing diagram could be improved but I got through ok and I'm not an electrician. I replaced one that was similar. This is quieter
by

Customer review from broan-nutone.com
Nov 19, 2014
This product worked fine but now the lights have quit working.
I have the same problem as Allen and wi4x4man. This product was wired correctly, took the electrian some time to figure it out. Could definitely use some longer wires. I have only used this unit for a couple of hours and now the lights do not work. The fan works but nothing else. I am troubleshooting it right now. I went to the Broan website to see if there were any troubleshooting pages.
by

Customer review from broan-nutone.com
Sep 6, 2014
Wish is had more heat
Purchased this to replace the Broan unit which had the blower heat, that unit stopped working within a year. This unit with the heat bulb isn't as warm. I like the heat blowing on me when I stepped out of the shower, this unit isn't nearly as warm
by

Keep your bathroom warm and clear with theKeep your bathroom warm and clear with the stylish Broan 70 CFM Exhaust Fan with Infrared Bulb Heater. This versatile fixture features a fan and heater that can work separately or together for convenience. This white fan also features polymeric dampers to help prevent back drafts and eliminate mechanical noise.See Full Product Description

NuTone 605RP Heat-A-Vent exhaust fans makeNuTone 605RP Heat-A-Vent exhaust fans make it even easier to build in warmth and comfort. With easy installation in mind, simply use the included hanger bars, which are adjustable from 16 in. to 24 in. Use the built-in junction box with receptacles to simply plug in heater and fan motors. The 1300W heating element provides fast, enveloping heat, while the efficient fan evenly distributes warm air throughout room. An efficient, quiet blower exhausts stale air and moisture to refresh the bath atmosphere for two functions in one unit that are compactly-designed to save on installation time and expenses.See Full Product Description