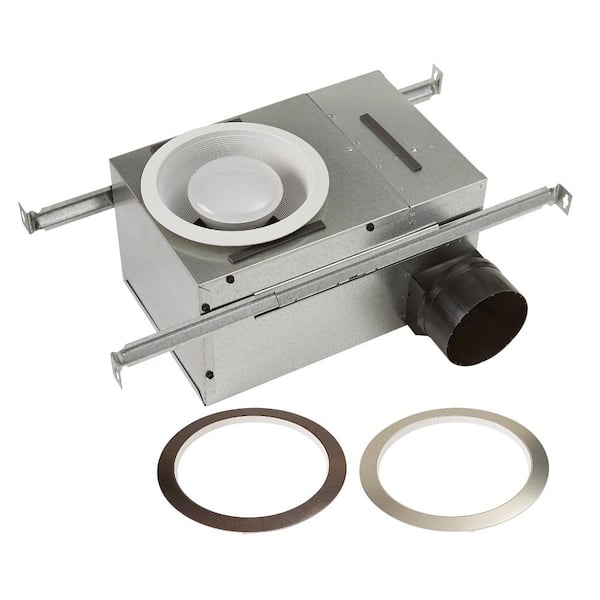 Recessed lights are popular lighting solutions. NuTone took it a step further with the NuTone Recessed 50-80 CFM, 0.8-2.0 Sones Exhaust Fan with LED Light by incorporating powerful ventilation in the same design and now we have additional energy efficiency with LED lighting. Our recessed fan lights disappear into the ceiling with other recessed lights, so they are practical decorating and air removal solutions for any room in the house. With the addition of trim rings, customers are able to match the light to any decor in the room.

The Homewerks ventilation fan features anThe Homewerks ventilation fan features an integrated Bluetooth-enabled stereo speaker and an LED light. Perfect for the tech-savvy homeowner with a desire to stream audio from their smartphone or tablets into their bathroom. Since the Bluetooth stereo speakers are integrated directly into the bath fan wiring, there is no need to re-charge the speaker. It also includes an LED white light, a blue night light and a soothing amber nightlight.See Full Product Description

The NuTone Roomside Series Decorative VentilationThe NuTone Roomside Series Decorative Ventilation Fan features a round LED panel surrounded by a white beveled ring for style that blends in to the decor of any room. This fan automatically turns on as humidity rises in the air, perfect for families on the go. Use the humidity sensor timing feature to set how long the fan will run before it automatically turns off. The design is paired with dimmable integrated LED lighting and a quiet, ENERGY STAR qualified 110 CFM fan, making it the perfect addition to bathrooms or laundry rooms. Powerful 110 CFM airflow clears the air of humidity, odor and airborne particulates and helps prevent mold and mildew. The fan operates at 1.5 sones for just right quiet, enough sound to know the its turned on. The EzDuct connector and Fold Away mounting ears make it flexible to almost any installation challenge, especially for rooms on the first floor or basement floor of the home. Worried about cutting drywall. You can do it. Each carton comes complete with a template to guide the cutout dimension. The SnapFit Flange Kit provides a self-trimming finish to cover a rough cut.See Full Product Description

The NuTone Roomside Series Decorative VentilationThe NuTone Roomside Series Decorative Ventilation Fan features a square LED panel surrounded by a white beveled ring. Choose from brushed bronze or brushed nickel finish with the easy change trim kit (included) for style that blends in. The design is paired with dimmable integrated LED lighting and a quiet, ENERGY STAR qualified 110 CFM fan, making it the perfect addition to bathrooms or laundry rooms. The installation adaptor is designed to completely cover drywall cuts, resulting in discrete and elegant ventilation. NuTone Roomside Series fans offer hassle-free installation from the room side, for spaces with no attic access. The SnapFit Flange Kit, EzDuct connector and Fold Away mounting ears make it flexible to almost any installation challenge, especially for rooms on the first floor or basement floor of the home.See Full Product Description

NuTone Roomside 110 CFM,1.0 Sone DecorativeNuTone Roomside 110 CFM,1.0 Sone Decorative Exhaust Fan with Round Flat Panel LED Light in White allows you to upgrade the style of your bathroom or powder room with an elegant and modern decorative ventilation fan. The Low-Profile LED panels are not only bright but also long-lasting for illumination where and when you need it. Designed to completely so the fan stays hidden behind the included adapter which blends in seamlessly with popular ceiling paint colors. Powerfully efficient ventilation works quietly to keep your space free from odor and humidity. NOTE: Due to certain State regulations this product is not available in Indiana and Hawaii.See Full Product Description