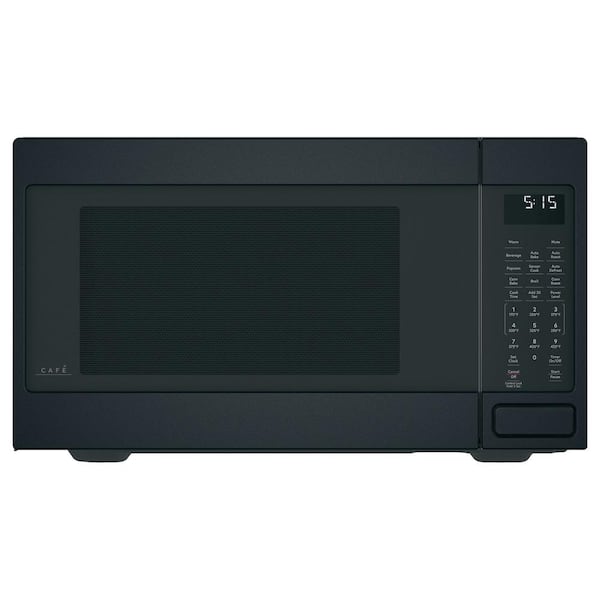 One look at the GE Cafe kitchen and you'll feel as if you've been transported behind the scenes of your favorite casual dining experience. Each appliance has been meticulously designed to create an atmosphere where people like to gather and love to cook. Tough stainless steel and powerful elements complement their robust appearance.

If used with the coordinating trim kit, should there be visible gaps between the microwave and trim kit?

Hi Ashley - Thanks for considering Café Model # CEB515P3MDS! This model is compatible with Optional 27" Built-In Kit CX152P3MDS Optional 30" Built-In Kit CX153P3MDS. When installed with trim kit, there is a gap between the back of the trim kit and the cabinet. This installation is not flush with cabinet front, but should be flush with the cabinet doors. That is the design intent. The small gap is on the sides for the air intake and exhaust openings. We'd love to have you in the family. Keep in touch at cafeappliances.com. Sue

Will this microwave in Matte Black (and its trim kit) match the GE Slate black appliances? Thanks!

what are the measurements of this appliance

What trim kit fits this microwave?

We want to have this as a semi-built in unit. Does the unit itself get too hot? Will it ruin surr...

Hi TanyMom- Microwaves need adequate air clearance on each side, the rear and the top to function properly. This allows good circulation for the intake and discharge air vents. Recommended clearances: 3 inches on each side, 3 inches on top and 1 inch in the rear. For reference, see page 3 of the Owner's Manual: https://products.cafeappliances.com/MarketingObjectRetrieval/Dispatcher?RequestType=PDF&Name=49-40786-2.PDF - Also, it is compatible with Optional 27" Built-In Kit CX152P4MWM Optional 30" Built-In Kit CX153P4MWM. See Quick Specs for cabinet dimensions: https://products.cafeappliances.com/MarketingObjectRetrieval/Dispatcher?RequestType=PDF&Name=CEB515P_4MWM%20_3MDS_18.6.22.pdf - Keep in touch! Sue

Customer review from cafeappliances.com
Apr 8, 2021
Door won’t open
Overall it seems to be a good enough microwave. I love the convection feature. Unfortunately the door release started out having trouble engaging the mechanism to open the door. Then the first time we used the convection feature it some how completely broke the door and now the door will not open unless we pry it open with a tool , something I’m no willing to do. So 2 weeks after getting the microwave it is now unusable and we have a 2 week wait before someone will come out to look at it. You’d think a higher end microwave would last longer and have better costumer service.
by JasonN
Response from Cafe_AppliancesApr 12, 2021
Hello- Thank you for taking the time to share you review. This is a beautiful microwave and we are glad you are loving the convection feature. However, we are very sorry to hear you are having this issue with your new microwave door. We can understand how frustrating this would be for you and your family. We appreciate your feedback and will share this with our engineering and design teams. Please let us know how the service call goes. Joyce@Cafe

Customer review from cafeappliances.com
Mar 15, 2021
Sleek look to my kitchen
I replaced all my kitchen appliances with GE’s Cafe Series. The microwave is the only piece that that does not have the Cafe Signature handles, but the streamlined design still works perfectly with the kitchen design. The microwave has so many features , but my favorite is the “sensor cook.” So far everything that I have cooked has been cooked to perfection. Love the new look to my whole kitchen and also like that all the appliances are connected to WIFI.
by ARS27
Response from Cafe_Appliances Mar 17, 2021
Hello- Thank you for taking the time to share your review. We appreciate your business and are so happy to hear you are loving the features of your microwave. The sensor cook is very nice and we are so glad your food is cooking to perfection. Thank you for sharing your photo, it looks so beautiful in your kitchen. We appreciate your feedback. Joyce@Cafe

Customer review from cafeappliances.com
Dec 18, 2020
Steel Microwave
I always wished there was a stainless interior for a microwave. Finally my wait was over and I was very excited when I saw this model. My dream came true. This model not only steel made interior but also has dual mode of convection oven and microwave. On top of this it is also has SMART cooking. What else one needs for a daily cooking, especially if you have too many cooks at home who want to constantly heat/bake/cook. Now that everyone is home everyone is busy making something. My kids are very excited with WiFi features this unit has. So far so good, I have been using this microwave for all microwave needs. The 4 stars are I wish it had little easy way to clean the interior. There were some stains I could not get rid off. I also wish it had that nice handle like the built in models had instead of push button. Other than that I was able to make some chips other day very easily in small batches. This feature is useful when you don't want to use the huge oven or every single serving cooking. Overall I am very happy.
by Rgun

Customer review from cafeappliances.com
Sep 29, 2020
Best defrost feature
This is the first microwave we've had that can effectively defrost meat, fish, and poultry. And it looks amazing!
by

Customer review from geappliances.com
May 24, 2020
Great looking microwave - works as expected
Bought as part of overall appliance refresh with all Cafe gear. Microwave works fine. It was smaller than I expected but that's my fault for not looking at the specs and would have bought it anyway for the overall look. Only use basic features so not much to report on for microwave deep cuts.
by txben910

Customer review from cafeappliances.com
Jan 10, 2019
Nice additional oven!
We were looking to replace our slide in range with one with a double oven but this was much more economical. It's a great way to bake/roast/broil for just one or two people without heating up the whole big oven. We have made cinnamon rolls, fish, chicken, pizza, potatoes, garlic bread (under the broiler), etc. The only thing I feel you need to be aware of is that it does take longer to cook things than the recipe typically states...about 25% longer on average. Maybe because it doesn't get to full temperature because it's a convection? So for example, chicken nuggets if the recipe says 12 minutes it's typically about 16 minutes before they're really done. Chicken that's baked in the regular oven for 40 minutes takes about 50 minutes in the convection microwave. Once you have that down, it's really an excellent appliance. We also bought the trim kit since this was installed in an upper cabinet
by JenBerry

Customer review from geappliances.com
Dec 13, 2017
Microwave/Convection oven/Broiler
Three in one, what more could you ask? This beauty does it all....
by NickelMac

Customer review from geappliances.com
Mar 6, 2017
Microwave door installed crooked
I bought all GE Cafe appliances for new home. All is great except for the microwaves door was installed CROOKED by GE. This Unit works fine but it looks poorly built. Working GE to replace as the door is NOT adjustable.
by Pie baker queen