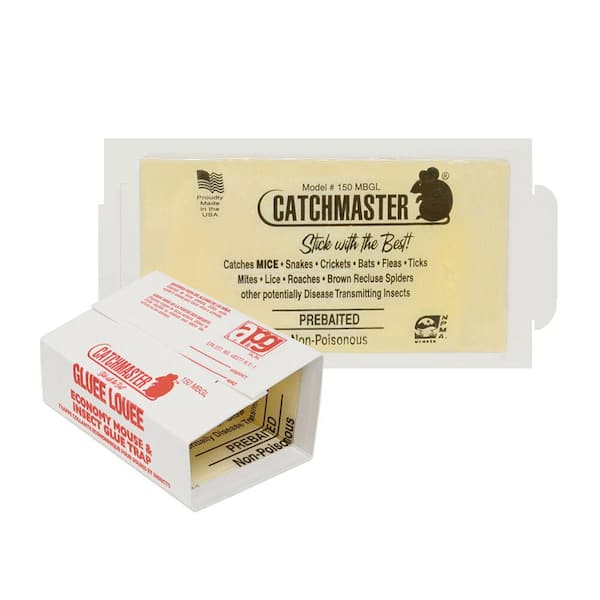 Professional Strength Mouse and Insect Size Glue Traps are made with the best adhesive formula available. Smaller and more economical than the standard size mouse glue board. Pre-baited to attract mice and insects.

8
Filter by:
Showing 1-30 of 69 reviews
Oct 8, 2017
I have used every product on the market for catching mice/rats and other insects, but this one is...
I have used every product on the market for catching mice/rats and other insects, but this one is far superior over all others. They have a nausiating oder but, I suspect it is what attracts the mice. I put out a Tom Cat glue trap like this and witnessed a mouse walk back and forth over it with absolutely no stickiness to it. I swear that mouse would look right at me and laugh at me because it was able to walk back and forth numerous times. But, the CatchMaster catches them ever time. We live in the country so mice are a given and no cat on the face of this planet is as affective as these CatchMaster glue traps. The secret is where you place them. I cut then in half (Clean the glue off the scissors with Goof Off or WD-40) and place one on each side of each appliance against the wall. Because the entire body doesn't always get onto the glue, I end up using the head of pliars to hit them on their head or across their back so they don't manage to remove a limb trying to get loose while taking them out to the burn barrel or bury them. I don't bother folding them into the box shape because, I can make them last twice as long. If you have house pets make sure they are not placed where they can get caught on them. I have one particular closet that the mice seem to find their way into because the room is kept dark. I line enough of the glue traps across the floor inside the doors, and they never get past them. Just remember where you place each of them, because the odor of a dead mouse is something you never want to smell. Very pungent is one way to describe their odor. Decon is affective but you never know where you are going come across a dead mouse. With these CatchMaster Glue Traps they will be found where you placed them, unless their entire body is not caught on the glue. They will use their free feet to pull or push themselves across the floor until something is in their way to stop them. I lined the floor across the front of the stove but, we just found 4 old dead mice that managed to crawl away under the stove, hence the reason I place them along a wall, so the outer corners of the appliances are the best locations. Be ready to replace the traps as you remove one. Less than 15 minutes after catching one mouse, hitting it over the head, and removing it and immediately replacing with a fresh glue trap, I caught another mouse in the exact same place along the wall at the outer back part of the washing machine near the foot of the machine. If you place them as I discribe you are almost guaranteed to catch them coming or going behind the appliances. It's a good idea not to hide them or you might forget about those until you start smelling a dead mouse and you have to hunt where that pungent odor is coming from.
by
Response from CATCHMASTER - Product GuyOct 17, 2017
MouseCatcherMaster ... Thank you for your awesome feedback. We greatly appreciate your patronage and are very glad to hear another success story.

I would go back to Home Depot if you feel they shipped you the wrong item. Best of luck!