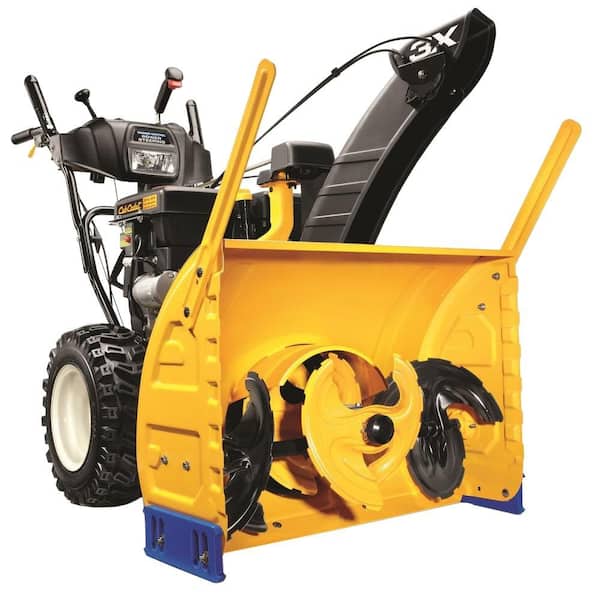 Introducing the revolutionary new Cub Cadet 3X three-stage snow blower. This industry exclusive cuts through tough packed snow and ice like no other machine available today. The 3X’s unique high-speed induction accelerator draws snow through the system, creating an effortless forward motion. No backups. No ride ups. No spill over. This new 3Xtechnology easily cuts through deep snowfall up to 50% faster than two-stage snow blowers. There’s no stopping the next generation of Cub Cadet snow blowers.

1
Filter by:
Showing 1-4 of 4 reviews
Feb 8, 2016
Very poor
I live in the Boston area, last year(2015 January-March) we had record snow and the snowblower I had for 2 years got stolen,because of the record snowfall I had few options of where to buy a new machine,I found a place in New Hampshire that had snowblowers in stock, the only one they had that was in my budget was the Cub Cadet 357cc 28" 3X. I used this machine for one storm last year and it seemed to do what I needed it to, but it did not preform the way I expected. Last week, Friday,2/5/2016, we got a relatively minor but typical snow event, 6" of heavy wet snow. Your machine that is rated at 357cc, which correct me if I'm wrong, converts to approx.9-11hp. Aside from ripping through shear pins, which I understand and don't really have" too" much of a problem with,my biggest problem was your 3 stage auger ,it kept getting jammed up and it seemed like the machine had no capacity or ability to to transfer the power to the impeller that throws the snow out of the chute,I had to pour oil and wd-40 in to keep things moving but it still got jammed and found myself continually shutting off and sticking my hand in the ejection/impeller housing to clear the blockage, I know well enough to pull the spark plug wire before I do this, but I assume most home owners don't, which could be a liability if this is a common problem. I also noticed that there is a feeder shroud for the impeller, this seemed to be the problem where the snow got clogged. My last machine had a similar drive plate/friction wheel set-up but was able to effectively chew through and throw hardened icy snow that was plowed in front of my driveway entrance. Also I feel that at full throttle,compared to other machines and my past machines, it still sounds like its at idle, I have checked the throttle control arm and it doesn't seem like anything is out of place. Aside from selling this machine and buying a new one from a different manufacturer can you please advise me on how to correct these problems. Thank You
by

Customer review from cubcadet.com
Oct 19, 2015
Many plusses
I used my 3x on Long Island for the winter of 14-15. I was overwhelmed by the power to start with. Power steering was huge plus. Not heaving to turn by my power was a dream. Heated hand grips also helped to keep hands warm. It starts on the first pull everytime. Another plus is gas tank size. Best is the end of the driveway. We all know the plows,come thru and we end up with a lot snow build up. I was waiting for this to happen when it snowede, well, I was dumbstruck at just how well the 3x preformed. Make sure you get an extra set of shear pins. I changed the oil after the first battle and put Mobil One synthetic in place of conventional oil. I wasn't impressed with the headlight. No matter when you throw snow it's easy to see where you are going. Everything you do is on the control panel, so you don't need to stop for any reason. If I could change one thing on the unit. I would rather have a metal out take chute instead of plastic. Yes I would by it again, only wider next time. I made over 3,000 dollars last year with it so it's already paid for itself. Have fun, I do
by

Customer review from cubcadet.com
Mar 18, 2015
good machine
This snowblower works great in deep snow but when the snow is only about 3 inches deep it just pushes it ahead like my old 2 stage did. Very disappointed with that happening. I also bought the cab for it and if you use any gear higher than 1st the front of the machine will raise up over the snow. The machine is well made and should last a long time.
by

Customer review from cubcadet.com
Jan 28, 2015
Great performance
I purchased the 3X 28" blower on Sunday 25Jan2015, 24 hours before the 2015 blizzard here in New England where I received about 24+" of snow. This blower had no trouble getting through even the nearly 30" at the end of my driveway. The difference between this and my former 13 year old 2 stage blower are tremendous. Even with the amount of snow we had, I was able to clear my driveway in about an hour less time (50% reduction). I was also surprised at the low fuel consumption, maybe 1 gallon over 3.5 driveways I cleared. Add the power steering and heated grips, and I am much less sore than I used to be. the power steering does take a little getting used to, but is well worth the time. If you're considering this as an option to buy versus another, go for it, you won't be disappointed.
by