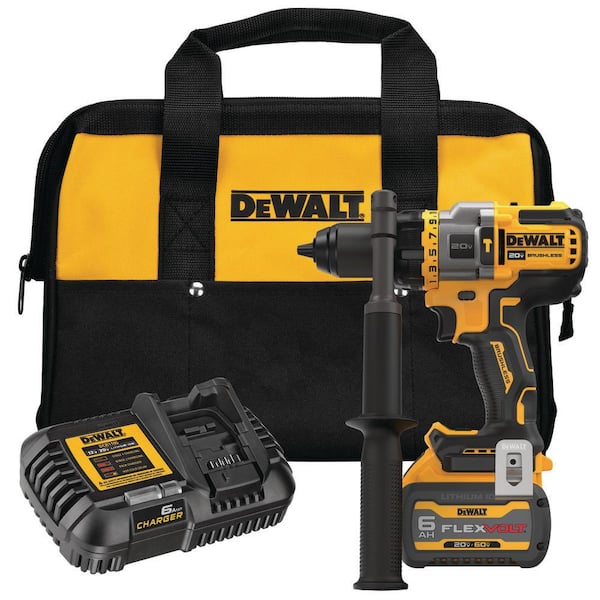 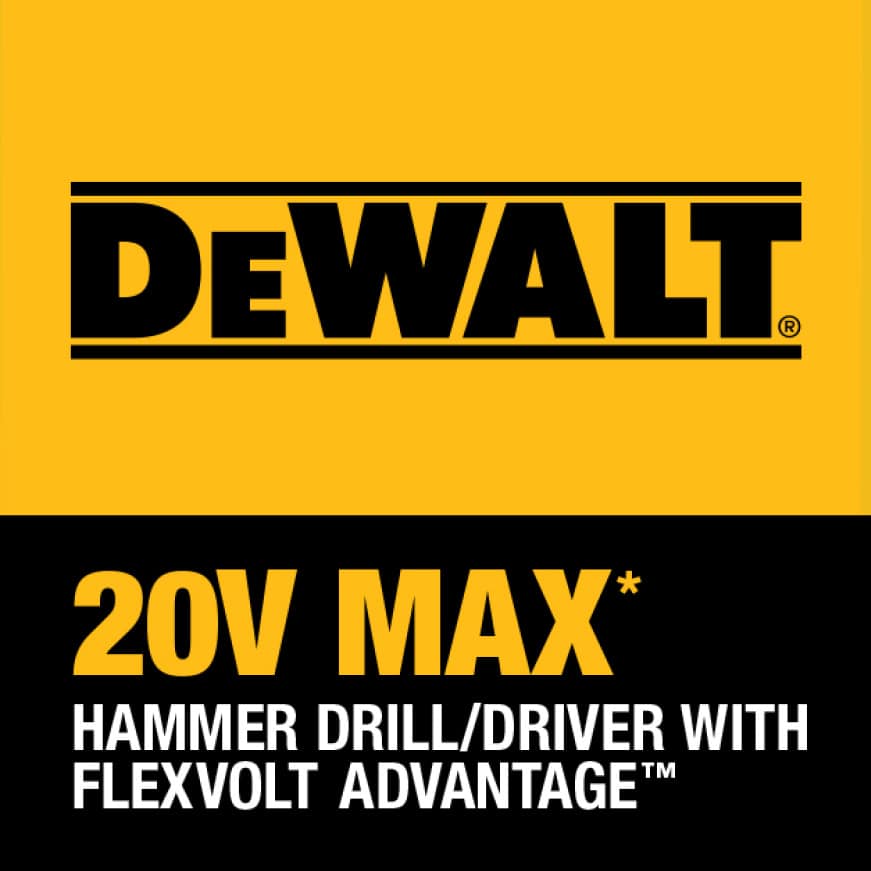 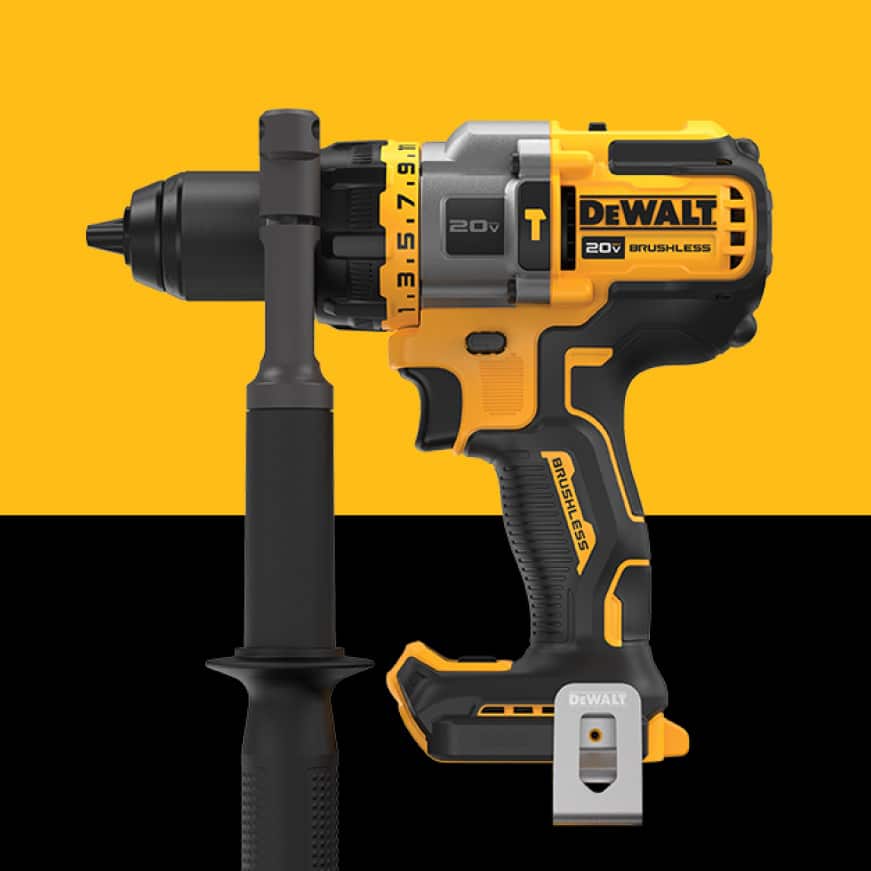 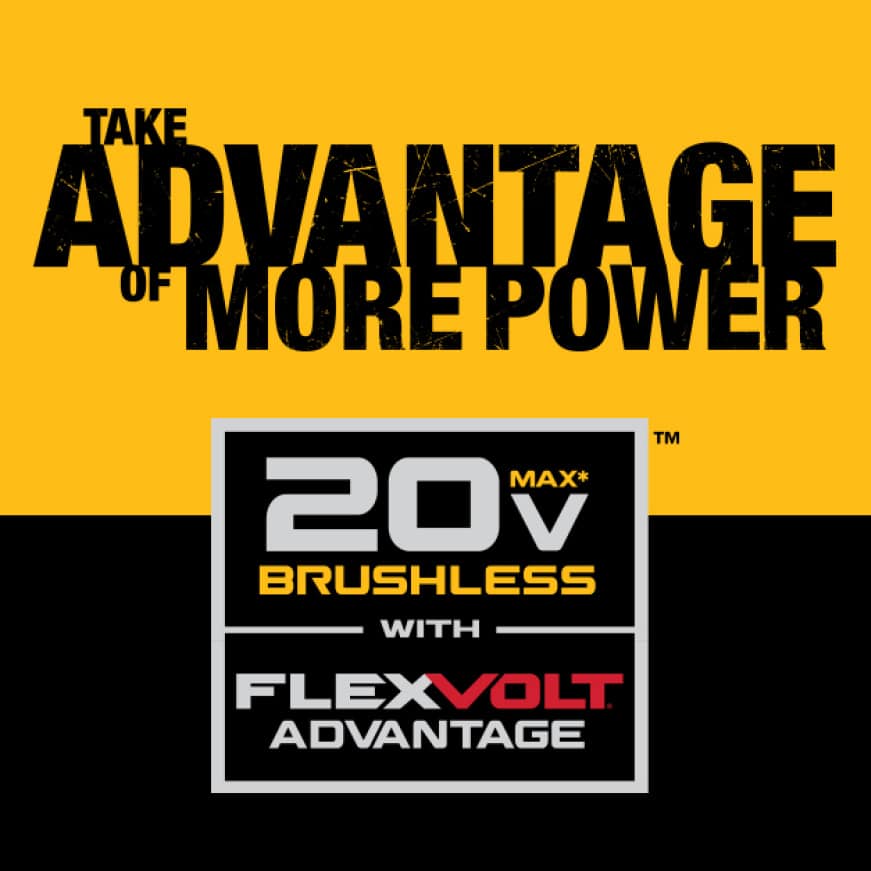 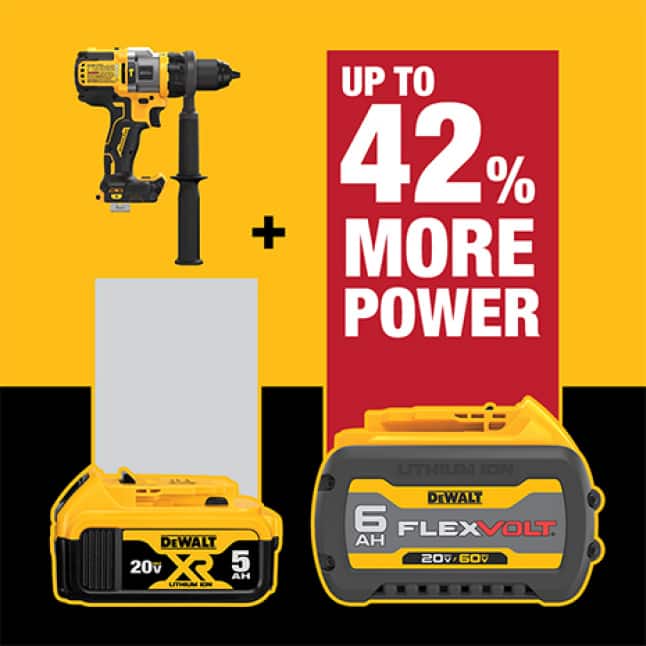 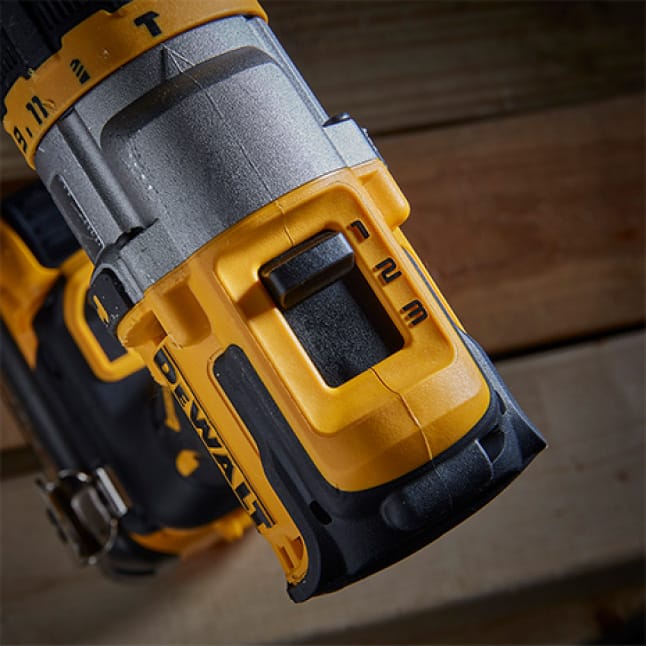 Complete a wide variety of applications with 3-speed transmission and 11 clutch settings. 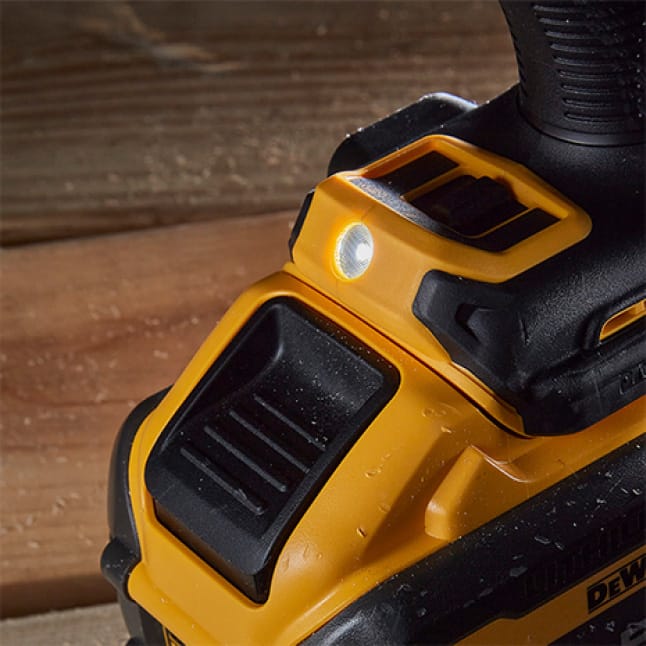 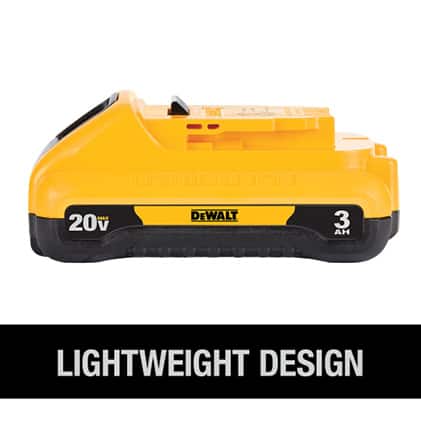 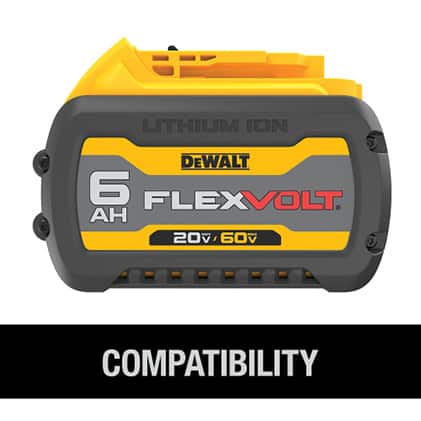 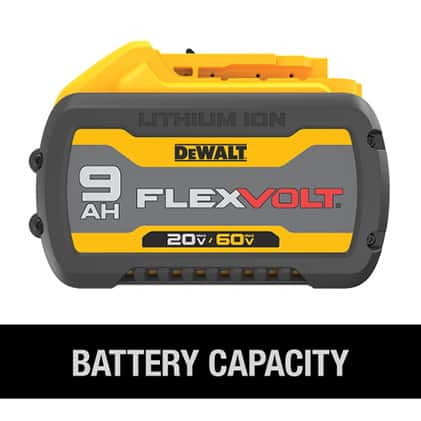 As 20V MAX and 20V/60V MAX FLEXVOLT batteries increase in amp hours (Ah) so do the the runtime capacities. 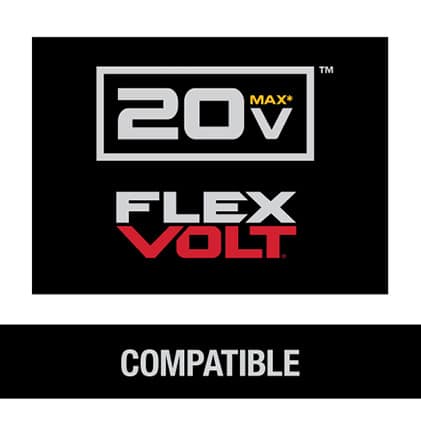 Get more power with the DEWALT® 20V MAX* brushless tools with FLEXVOLT ADVANTAGE™ tool technology. The 1/2 in. Cordless Hammer Drill has up to 42% more power when paired with a DCB606 FLEXVOLT® battery vs a DCB205 20V MAX* 5.0Ah battery. This kit includes one 6.0Ah FLEXVOLT® battery, 6 Amp charger, and kit bag.

How much torque does this drill have?

Can I turn off the “hammer” and use it as a normal drill?

Can this mix mud?

If you set it to the drill only setting.

Can i use a 6 inch hole saw with this drill for curting a hole in the floor for a toilet?

Yes it will handle the hole saw. I used it for 3/4 in cement bit.

What is the max inch lb torque for this model?

Does this come with the current Gen 2 battery? The current black Friday add does not which is de...

0
Filter by:
Showing 1-10 of 88 reviews
Apr 23, 2021
Cordless hammer drill is excellent!
[This review was collected as part of a promotion.] A few weeks ago I got this cordless Dewalt hammer drill for testing. It has been an excellent and enjoyable tool to use and is by far the best cordless hammer drill that I have ever owned or used! No complaints whatsoever. I highly recommend you could pick one up if you’re in the market for such a tool.
by Sawdust Studio

Customer review from dewalt.com
Apr 23, 2021
Powerful Drill
[This review was collected as part of a promotion.] I’ve had this Hammer Drill about a month. During this time, I’ve used it to drill into Brick, Concrete and Wood. Since the original charge, it hasn’t been back on the charger. The Flexvolt battery holds a charger for a long time while producing a lot of torque. My favorite features are its versatility and the light coming from the handle so your work area is well lit. I own SEVERAL Dewalt 20v tools and this is becoming one of my favorite! I highly recommend the DCD999T1 Hammer Drill!!
by Mgoz

Customer review from dewalt.com
Apr 20, 2021
Awesome Drill!
[This review was collected as part of a promotion.] I used both features on the Dewalt Hammer Drill/Driver. I immediately noticed the power and torque when using both features. I hammer drilled some holes on the pavement and the drill did not skip a beat or got stuck, nor did I notice the drill getting hot, which is a plus for me since heat can shorten the life of any power tool. I also like that I can use a range or Dewalt batteries with the drill. The LED light is awesome. It’s very bright and spotlights the whole drilling area. It also has 3 lighting selection to choose from. If you’re in the market for a drill try this drill you won’t be disappointed.
by WilCor

Customer review from dewalt.com
Apr 19, 2021
A Beast!!
[This review was collected as part of a promotion.] I wasn’t sure about a drill/hammer drill combo. I wasn’t sure it would be strong enough to drill concrete like the Dewalt SDS. It delivered. I drilled a 3/8 hole into old 5in thick concrete. It drilled though it like butter. The large side handle gives you a lot of control and downforce. I like the rubber bumpers on the side so you can lay it down and not scratch your tool all up. I’m all for putting the tools through the paces, but I like to take care of my tools so they take care of me when I need them to. I like the all metal chuck. It doesn’t feel cheap. The 6 amp hr 60v battery is a must when drilling all day. It has more power than you would ever need. And of course the LED light has options for how long it stays on. Great for dark corners. All and all this drill is a beast for the job site. I only had one complaint and that is it is loud when drilling concrete. Don’t forget your PPE.
by Kasey

Customer review from dewalt.com
Apr 18, 2021
Excellent drill
[This review was collected as part of a promotion.] This drill is typical Dewalt quality, excellent, powerful and the battery lasts a long time. The LED is in the right spot to illuminate the job. I used this drill to assemble houses for my goats and it was unstoppable. I have used Dewalt in the past as a firefighter and this drill lived up to what I thought it would do. The only issues I have with this drill is the large battery makes it a little unbalanced and the battery fit was a little loose.
by Jmayhew

Customer review from dewalt.com
Apr 17, 2021
In love
[This review was collected as part of a promotion.] I own quite a few dewalt products and like the rest this does not disappoint. This drill is quickly becoming my go to! It is a workhorse. The battery life is great as well.
by

Customer review from dewalt.com
Apr 14, 2021
A monster drill for the toughest jobs
[This review was collected as part of a promotion.] I have a Dewalt DCD790 that I picked up in 2014 that been my primary drill since then. This new drill is an upgrade is almost every way! More power, new functions, and improved design. -Function Let me start off by talking about the new light. Not only is it brighter, by a lot, it lets you keep it on continuously via selector switch by the battery. You can practically use the thing as a work light is so bright on the max setting! Very useful when you have to look around in a dim environment or light up your workspace. The clutch mechanism has been updated since I got my old drill and it’s been improved. While in the 3rd speed setting, the drill offers the same fine clutch control as before but it’s now electronic rather than mechanical. It will detect the amount of torque being applied and will halt the motor at the appropriate time. There’s thankfully no more loud clutch rippin’ once you hit the limit, much better now. The chuck has also been improved to stay tight during use. There’s some sort of extra resistance applied when locking down the chuck along side the ratcheting mechanism. The first time I tightened it down it got stuck and after a good heft, it backed off. I’m happy to report, it tightens and loosens just fine now after the first use. The flexvolt advantage is a nice touch to round out the drill in function. I don’t often do jobs that need this kind of power, but it’s convenient to have that extra oomph on tap. This thing rips through wood and concrete while on the 60V battery, it’s seriously impressive! Drop it down into the 1st speed setting when you need some wicked torque too. You can also slap a light weight 2ah 20V battery when you just don’t need the extra power and want something more compact and lighter. The *flex*ability is super handy. -Ergonomics One thing I’ve always like about Dewalt is the ergonomics and looks. It has the same classic design and these 20V tools have had for years and for good reason. It still feels premium in hand and the switches and buttons are spot on. The speed selector is a bit stiff, but I expect it to break in over time. Yes, this is drill is bigger and heavier than my old DCD790, but for the greatly added capability they stuffed in there I am satisfied. -Value If you get the full kit, this is a great value for what all you get. The drill, battery, and charger will easily go for more that what you’ll pay for the full kit. It comes with a tool bag and belt clip too! I was pretty excited to get a 60V battery that now opens up the opportunity to get some 60V tools in the future. Gotta love that flexvolt versatility! -Overall If you need a hammer drill, go ahead and grab this kit! It opens up a lot of options for future tools and you’ll get a supremely capable tool too. This one won’t disappoint!
by Johnson

Customer review from dewalt.com
Apr 12, 2021
Very solid drill
The DCD999 was sent me last week and I must say I am very impressed with the performance this drill delivers. Using it as a hammer drill, the 60v flex battery really packs a punch in the power.
by Fire26man

Customer review from dewalt.com
Apr 11, 2021
Powerful!
[This review was collected as part of a promotion.] I installed some new windows in cinder block walls. They are solid cement. I put a masonry bit on this hammer drill and it went through the wall like butter! I had 6 holes piloted out in under 5 minutes. Such a great tool to have in my arsenal!!
by MattTheCarpenter

Customer review from dewalt.com
Apr 11, 2021
Heavy duty
I got this drill a few days ago and this thing so far is a monster. It came with the 6ah flex volt battery life isn't a problem generally. There doesn't seem to be anything this drill wont go through. Highly recommend.
by Riki Bobii

The Milwaukee M18 FUEL 1/2 in. Hammer DrillThe Milwaukee M18 FUEL 1/2 in. Hammer Drill is the industry's most powerful brushless battery powered drill, delivering up to 60% more power. Its cordless body is up to 1.5 in. shorter and up to 2-times faster under heavy-load than other models. The all-metal ratcheting chuck is the best in class by providing increased bit grip strength and corrosion resistance. The POWERSTATE Brushless Motor was purposely built for the M18 FUEL 1/2 in. Drill Driver to provide Up To 60% more power than the competitive set. Built-in REDLINK PLUS Intelligence ensures optimal tool performance and provides overload protection to prevent damage to the tool and battery during heavy applications while still maintaining compatibility across the entire M18 system. The REDLITHIUM High Output HD12.0 Battery Pack delivers more work per charger and more work over the life of the pack than competitors. In addition to the drill, this kit comes with 2 M18 REDLITHIUM XC 5.0 battery packs (48-11-1850), 1 M18/M12 multi-voltage rapid charger (48-59-1812), a side handle, belt clip, belt holder, and a durable carrying case.See Full Product Description