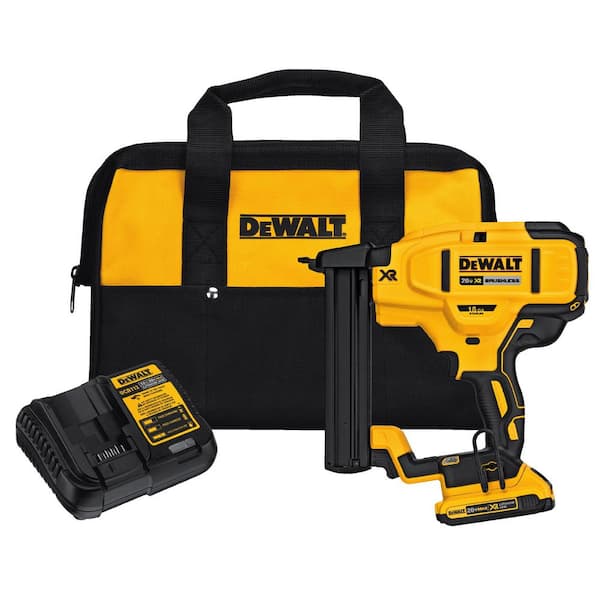 The DEWALT DCN681 18-Gauge Narrow Crown Stapler drives 18-Gauge 1/4 in. narrow crown staples from 1/2 in. to 1-1/2 in. which makes it ideal for cabinetry, furniture, paneling, and flooring underlayment. With its brushless motor powered by a DEWALT 20-Volt MAX Lithium-Ion battery the DCN681 is ready to go to work without the hassle of using gas, compressor, and hose. Tackle jobs both large and small with the features of a pneumatic tool and the freedom of cordless. Maximum initial battery voltage (measured without a workload) is 20-Volt. Nominal voltage is 18.

12
Filter by:
Showing 1-10 of 217 reviews
Jul 8, 2020
Installing some 1/4" mdf on the back of a frame...
Installing some 1/4" mdf on the back of a frame for some wainscoting and it worked like a charm. So nice to not have a loud compressor and long hose to deal with.
by
1 found this review helpful
Mar 27, 2020
AWESOME
[This review was collected as part of a promotion.] Ever since I got this I tested it out on many applications and i must say I'm blown away. Was skeptical at first but seems like I'm going to have to switch over to cordless. No compressor, no hoses very portable especially with the belt clip. Little heavy but not a deal breaker. Depth control is great and multi fire is very smooth. Definitely exceeded my original expectations.
by

RYOBI introduces the 18V ONE+ Lithium-IonRYOBI introduces the 18V ONE+ Lithium-Ion Cordless AirStrike 18-Gauge Narrow Crown Stapler (Tool-Only) with Sample Staples. This 18-Gauge Cordless Narrow Crown Stapler features AirStrike Technology, which eliminates the need for noisy compressors, bulky hoses, or expensive gas cartridges. This means faster setup and easier maneuvering on the job site or at home. The RYOBI ONE+ AirStrike 18-Gauge Stapler is for use with 1/4 in. narrow crown staples. Best of all, it is part of the RYOBI ONE+ System of over 260 cordless tools that all work on the same battery platform. Backed by the RYOBI 3-year Manufacturer's Warranty, this crown stapler includes a belt clip, sample staples, and an operator's manual. Battery and charger sold separately.View Full Product Description

For nail finishing, look to this DeWalt 20VFor nail finishing, look to this DeWalt 20V Max Lithium-Ion Cordless 18-Gauge Finish Nailer Kit. Great for fastening crown molding, casing and baseboards, it drives 1/4 in. narrow staple crowns from 1/2 to 1-1/2 in. An adjustable depth-of-drive and a free depth adjustment for the precise countersinking of nails allow you control. For more smooth operation, it features an easy jam release. A lightweight design, fast 45-minute charge time and brushless motor increase runtime for more productivity. The 3-LED fuel gauge system gives you quick feedback on the state of the charge and multi-functional LED lights give you greater visibility.View Full Product Description

Achieve hassle-free, professional resultsAchieve hassle-free, professional results with this DEWALT 18-Gauge Narrow Crown Stapler. Driving 18-Gauge 1/4 in. narrow crown staples from 1/2 in. to 1-1/2 in., this reliable tool is perfect for paneling, cabinetry, furniture and flooring underlayment. Its brushless motor is powered by a DEWALT 20-Volt MAX Lithium-Ion battery, so you can use it without needing gas, compressor and hose. Enjoy all of the advantages of a pneumatic tool with the freedom of cordless power. This stapler is compatible with all DEWALT 20-Volt MAX batteries and chargers For a limited time get a Bonus 3AH Battery Pack and Charger with purchase.View Full Product Description