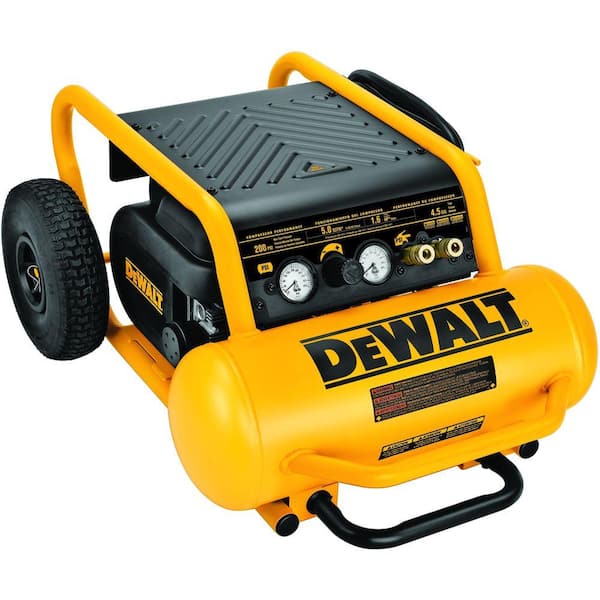 Will this operate a 20 ton bottle jack ?

Please contact the Jack manufacture for specifications on what will work with their product.

Why won't my compressor build up air pressure passed 60psi

I would check two things. First, there is a pressure relief valve on the bottom side of the tank. Make sure this is closed. Second, check the "Regulated Pressure" knob to make sure it isn't set too low. The regulated pressure is the pressure you want to deliver to your attachments. The tank pressure on mine typically builds up to 180 psi. If both of those things seem right, you might need to call the company.

Can use a 3000 watt digital inverter hooked up to my car to run this air compressor?

Electrical systems on vehicles vary; please check with your vehicle's manufacturer prior to using any accessory/tool.

How fast is the recovery time for the tank to refill?

It takes just a minute or two for the tank to recharge, when completely empty.

Can i use this compressor for dental supplies?

Compressed air quality depends on the inlet air and what the compressor adds to it. Both oil-less and lubricated compressors are used in dentistry. Both require particulate filters to remove any airborne dirt and dust. With a lubricated compressor, the system must also include reliable coalescing filters to ensure patient safety. Most dental compressors include a dryer to remove moisture. The common types are desiccant and membrane. Both types use air to purge the saturated desiccant material or membranes. This reduces the air available chair-side. When selecting, consider how much dried, compressed air is needed for the purge. Keep in mind this DeWalt 4.5 Gal. Portable Electric Air Compressor is not rated for commercial use, though, it is often hard to quantify up front, your experience has probably shown that good quality equipment pays for itself. In the long run, quality compressors last longer, with less frequent repair and lower service costs. Can you afford the downtime?

How much oil does the compressor need

CAN I USE THIS COM0RESSOR " DEWALT 4.5 Gal" TO SPRAY MORTAR IN WALL AND CEILING??? IS 5 SCFM ENOUGH?

Yes it is awesome choice

Hi, Should I still use an inline filter for the hose even though there is already a filter for ai...

Since it's only a 4.5 gallon tank, you can just drain the tank after each use, unless you plan on painting or sandblasting, then I would strongly suggest using a filter. If it makes you feel better, go ahead and add a filter, they are not really expensive.

How many watts does this compressor use

13
Filter by:
Showing 1-10 of 110 reviews
May 30, 2020
Beyond expectations
[This review was collected as part of a promotion.] I bought this a few months ago and the wife and I decided to build our own cabinets. I have 2 Dewalt drills in addition to the Dewalt air compressor. The air compressor has changed my life. I absolutely am a Dewalt guy and now, I’m in love with air tools now thanks to this compressor. This is the first time I’ve ever owned an air compressor and I’m so glad that I took the plunge. Being a Dewalt guy, there was no choice but Dewalt air and it has definitely not disappointed me.
by Jhoward

Customer review from dewalt.com
Feb 21, 2020
Not impressed
Bought this a few weeks ago went to use it and it no longer holds pressure only used it twice
by First responserestoration

Customer review from dewalt.com
Oct 2, 2016
Great Machine
Even with me being partial to Dewalt Tools, this compressor is the one to have. Especially for guys who shoot texture.
by
Jul 18, 2015
Can't use in upright position
I only gave it one star because when I look at reviews, I always look at the most critical first. I figure other people might do the same. I actually never even turned the thing on to see how it ran. As you can see by the attached pictures, I intended to run it in the upright position due to how my garage is built and where I already had my hose reel. I didn't see the warning label on the display model or I wouldn't have bought it in the first place. I think the reasoning is because in the upright position, the tank fill fittings are closest to the bottom and thus would allow moisture accumulation to go back down into the compressor and gauges. Another thing, the display model boasted the flat free solid rubber tires which I was excited about since I have one on my wheelbarrow. When I got mine home and unboxed, it had tube tires on it. I'm returning mine.
by Jeremy

10 people found this helpful
Nov 20, 2013
Contractor Tested
We have run this little girl everyday for several hours at a time.It sits out In the weather on back of the work truck.I have pushed,pulled and dragged this machine through all kinds of terrain.Very satisfied and will buy the Identical if we ever ruin this one
by NYSHEDGUY

17 people found this helpful
Mar 28, 2021
Did not last long
I got about 10 uses out it , I think something went wrong with switch , it will turn on some times , I can not count on it have it sitting in my garage . I have power tools they work great disappointed in air compressor
by Veteran

Customer review from dewalt.com
Feb 15, 2021
Mediocre
Regulators/valve systems are junk. Everything leaks. Multiple warranties and multiple compressors and they each have same problems. Buy a different brand. And I'm a Dewalt guy. I have thousands upon thousands of dollars in Dewalt power tools.
by TopNotchConst

Customer review from dewalt.com
Dec 29, 2020
runs pretty good
will run several nailers at one , and can keep up with a shingle hogs air consumption . compressor build alot of moisture in the system, not sure if its due to the air pickup being on the bottom of unit, seems to cycle great, cold weather dosent seem to bother it, other than the moisture in the system.
by Dewalt Mikey

Customer review from dewalt.com
Aug 10, 2020
Wont last
I own a construction company and bought two of these just less than a year ago. One lasted about 6 months and the other just quit building air today. When they were new they worked great. But quickly wore out.
by CodyMPB

Customer review from dewalt.com
May 31, 2020
Great
[This review was collected as part of a promotion.] The best compressor I've owned. Does not leak air. Quite running.
by JRINMGMO