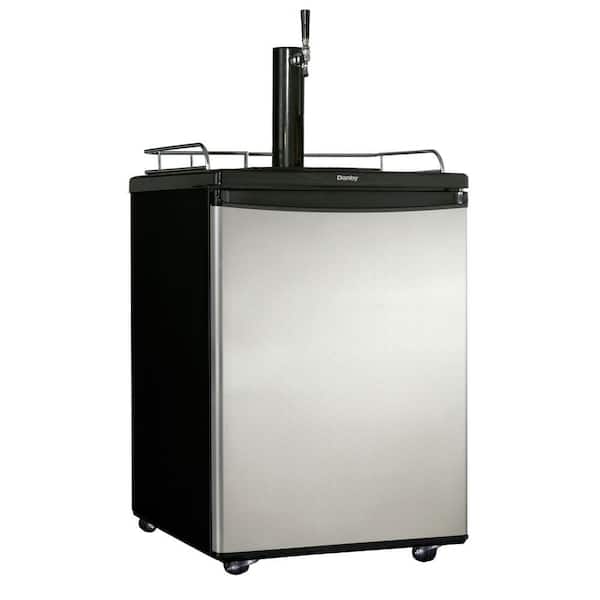 For convenient access to cold beer, try the Danby Designer portable keg cooler. It can hold full or pony sized kegs, and can convert to a 5.8 cu. ft. all fridge. The scratch resistant work top lets you store accessories. The spotless steel door finish is attractive. Designed for indoor use, this keg cooler is perfect for parties or watching the big game. Co2 tank and drip tray are included.

im having problems with my kegerator.it don't turn on could it be the thermostat?

Hello Jim, Thank you for your question. There are several reasons that your kegerator is not turning on. We would recommend that you contact our Consumer Service Department at 1-800-263-2629 or through Live Chat available on our website at www.danby.com to speak to one of our agents who will be happy to assist you. Regards Ann

Does this fridge hold 2 of the smaller 20L kegs? One as back up to be cold.

I have a question can I use this Outside

It's not made for outdoors. i would move it out for a party (day or two) but its not made to be exposed to the elements

Does this unit have a circulation fan?

Hello JCH, this model does not come with a circulation fan.

The description says "optional casters". It this unit shipped with the casters, or do they need ...

Do you carry spare repair parts as a temp. Control replacement

Hello Dick, To purchase additional or replacement parts for your Danby appliance, please contact our Parts Distributors directly at 1800-432-8542 or 1800-496-6049 or please call our customer service number 1800-263-2629. They would be happy to assist you with all pricing inquiries, ordering and shipping your items directly to you.

Hello CS, the temperature range for this unit is between 36F - 47F.

I'm a homebrewer and I was wondering how many 5 gallon Cornelius kegs this will hold?

I would say two for sure. my previous one would hold three but this one has a molded "shelf" in the back

how or where do you charge the CO2 cartridge

Yes, you can switch the handle to whatever one you want,

Customer review from danby.com
Jul 11, 2015
Great kegerator....but Home Depot experience was pretty bad
I love the kegerator, works great...especially after a few mods. No temperature display, but a quick fix by adding an indoor/outdoor digital thermometer with a probe inside the unit. Just be sure to put the probe in a cup of water so you are measuring the liquid temperature not air temperature. I used the gel from an ice pack in a small container for a more permanent solution. Holds the temperature pretty well, generally fluctuates between 34-36 degrees at about half power. I also added a homemade tower cooler. You will get quite a but of foam on the first pour without it. Now for the bad stuff... I ordered this online for in store pickup. It came in quickly, but when I went to pick it up at the store I noticed a large hole in the box. Checked it out and found a pretty major dent in the back of the unit. Customer service agreed to take off 15% which I was satisfied with. Started loading my jeep and noticed parts missing...no tower, regulator, co2 tank, hoses, coupler...it was a dented fridge with a hole in the top that's it. Brought it back inside and waited over an hour while they searched the store for another box. They couldn't find anything so they had to give me my money back and re-order. They agreed to give me 15% off the next one, and free shipping to my house because of the inconvenience. The second kegerator comes directly to my house, again quickly...box was in much better shape but there was a small dent on the side. Then I opened the box and found all of the parts just thrown in the fridge. Regulator was damaged, drip tray missing leveling feet, co2 tank holder completely crushed. All of the parts were included, and although damaged everything worked. I called Home Depot online and they agreed to take an additional 15% off due to the damage. I'm disappointed with the packaging/shipping quality. This is probably more Danby's fault than Home Depot. I am satisfied since Home Depot tried to make things right and took some money off.
by Dcwe50

4 people found this helpful
Apr 28, 2015
Does it's job
When I received this product the outside box was beat up pretty bad, but the box inside was in good shape. The only thing that was damaged on the unit itself was that the backing part on one of the shelves was snapped off. With that said, I don't care about this since I won't be using them anyway. The only reason that I mentioned it was I know there are some people that would really care about something like that. I put it all together with no problems, other then re-drilling a few holes, it was very easy to do and there were no leaks with it after hooking up my first 1/2 barrel to it. You need to have a stand alone thermometer to get the temp set right, it had no problem getting the temp down and keeping it at 34F. Over all I would say that this is the best value out there. I have been using it for about 3 weeks now with no problems. I would defiantly recommend this to a friend.
by Link64
2 people found this helpful
Aug 28, 2013
Product simple and straight forward in setup and usage
Kegerator is a must as beer is better by draft. Especially for those who spent time in Europe and appreciate a good beer. Nice to be able to chill my beer where I want it instead of freezing the wife's produce in the fridge.
by RED52

The SBC635M features a large interior thatThe SBC635M features a large interior that can hold a full half, quarter, 1/6 or mini keg. It comes in a jet-black finish with a matching Sankey tower. The surface includes a removable drip tray to collect spills and a chrome guard rail to help keep glasses and mugs in place. We include a set of locking casters for easy mobility. The user-reversible door swing makes it easy to accommodate any locations setup. Automatic defrost operation ensures minimum user maintenance inside the 5.6 cu. ft. interior. A digital thermostat makes it easy to manage the temperature at the touch of a button. The external digital display shows the temperature in Celsius or Fahrenheit to ensure your beer is stored exactly how you like it. Our American Sankey tap kit includes all the accessories you need for draft service, including a 5 lb. CO2 tank and regulator. The floor is reinforced with a steel cover for added durability when loading kegs. This unit is designed for freestanding use.See Full Product Description