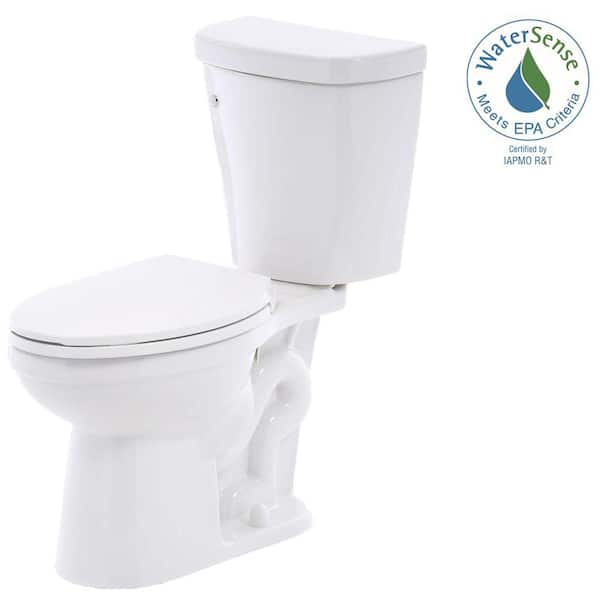 This high-efficiency Delta Brevard two-piece elongated toilet is equipped with FlushIQ functionality that protects against overflows and leaks, and enables hands-free flushing. Simply wave your hand past the flush sensor to release a conservative 1.28 Gal. of water-ample volume to thoroughly rinse and drain the elongated toilet bowl but modest enough to merit the EPA's WaterSense distinction for supreme efficiency. Built-in battery-powered sensors detect tank leaks and monitor water levels in the bowl to pre-empt overflows, making this commode not only green-friendly but upkeep-savvy.

151
Filter by:
Showing 1-10 of 226 reviews
Apr 5, 2016
Unreliable flush mechanism. Flush IQ lost it's mind.
I reviewed this product about a week after installing it in 2014 and it seemed ok at the time. But things went badly, so I asked HD to allow me to rewrite this review. For reference, here is my original review back in 2014: "====== 5 stars.... As well as being very efficient, this one works well, in a "cute" way. The flush handle is gone, replaced by a sensing button that does not require you to touch anything. It works almost all the time. Sometimes it does not work unless you actually touch it, but that is about 1 time in 50. I don;t know the reason for that and it doesn't bother me at all. The flush is typically efficient for this water usage, no complaints. Installation was easy as expected. Most toilets are easy to install these days. I am happy with it. I will have to wait and see how the battery life preforms.======" Fast forward to today, 4/5/2016, and the story changes a lot. Two months after installing this toilet, the electronic flush mechanism failed to extinguish the blue light on the front after flushing. I was concerned about the battery life being shortened dramatically by the light being lit continuously, so I emailed customer support at Delta. They kindly sent me a replacement mechanism. I installed it and it worked fine for about 6 months. Then it started flushing randomly by itself. Now, we live in an area where water is very expensive and there was no way I could afford to risk having this toilet stick on and easily drain away 100 bucks of water a day if I wasn't home to notice. So I removed the mechanism and installed a conventional one in its place. As an electrical engineer, I can recognize this as a bad design. It never should have left the drawing board. I did not bother to contact Delta again since I did not want another replacement mechanism. As far as the basic water-saver toilet goes, it just OK.
by GaryDoug
Response from DeltaFaucetMar 13, 2020
Hello GaryDoug,

Thank you for your review on the Brevard 2-piece 1.28 GPF Elongated Toilet in White with FlushIQ. I do apologize for the inconvenience and will be more than happy to assist you.
We are able to switch to a manual flush if this is something you prefer. When we face issues with these units we offer replacement parts, manual flush, or a refund. If you are not happy with the toilet I will be more than happy to offer a refund.

If you would like to reply back with your name, telephone number, and address I will do my best to rectify the situation for you.