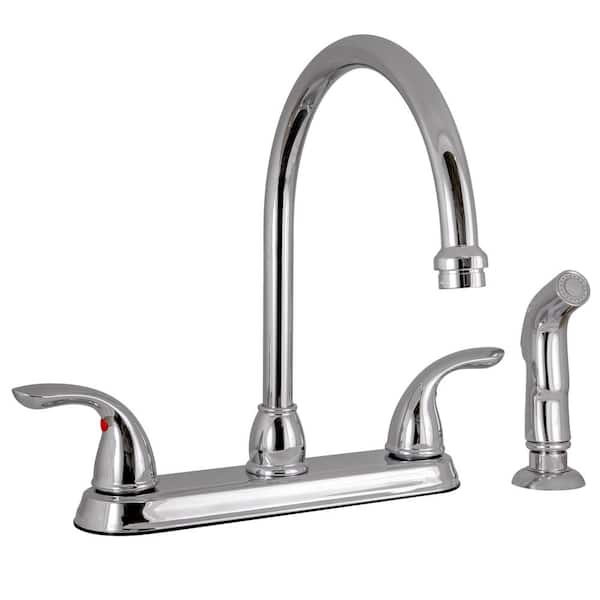 The Ashland Kitchen Faucet with Sprayer features a dual handle design and timeless style. Finished in polished chrome, use the matching side sprayer to eliminate baked on residue and rinse dishes and silverware clean of grime and food. The brass waterways contain zinc and copper which are known to prevent antimicrobial growth ensuring safe and clean water for your family. The 1.8 GPM flow rate ensures a steady water flow after years of everyday use. Wash dishes or fill pitchers with ease underneath this high vaulted faucet.

A very experienced licensed handyman installed this faucet. The water flows fine, but the issues ...

You need to call your experienced plumber back out and have him tighten the collar so it isn't so loose. As for the dripping, that's not normal for a new product and you may want to exchange it.

~ Does the faucet neck swivel? Thanks!

yes the junk will also leak a few years down the road.

Is this a true nickel color? The pictures look sort of blackish.

Yes it is a true nickle color. Love the faucet!

Why does it state NOT AVAILABLE FOR SALE IN CALIFORNIA?

Hi Alexis, due to watersense regulations, not all faucets can be shipped to California.

Anyone have any issues yet with this faucet? Leaking where the spout comes up from the base, any...

Hi and thanks for your question. The oil rubbed bronze finish would be closer to dark brown than black.

Can you attach a pur water filter to the faucet?

Hello Rookie954, The faucet has a removable aerator so a filter can be attached. Normally a small set of aerator adaptors are included with water filters to make attaching the filter easier. I hope this helps. Cheers, Chris

Can a pur water filter be attached to the faucet?

Yes, we have one attached and not had any problems.

Can I connect this faucet to a portable dishwasher?

Thanks for your question. Yes, this faucet can be connected to a portable dishwasher.

The Millbridge Kitchen Faucet is a contemporaryThe Millbridge Kitchen Faucet is a contemporary take on a tested look with its hybrid body and acrylic handles. Washerless cartridges eliminate leakage problems that result from worn washers and with an ABS side sprayer, cleanup will be easy. The brass waterways help to prevent antimicrobial growth ensuring safe and clean water for your family. The spout measures at a 7-9/16 in. reach and a 5 in. height, while the installation mounting has three holes and a max deck thickness of 1-3/16 in. The faucet has a flow rate of 1.8 GPM at 60 psi.See Full Product Description

Engineered for beauty as well as functionality,Engineered for beauty as well as functionality, the American Standard Colony Soft 2-Handle Side Sprayer Kitchen Faucet in Polished Chrome features a graceful gooseneck spout that offers ample sink access and dual lever handles that are easy to operate. The ceramic disk valving is durable and helps stop drips.See Full Product Description

The Eastport Single-Handle Kitchen FaucetThe Eastport Single-Handle Kitchen Faucet 595660 is timeless and sophisticated. The 15.5 in. tall spout has an elegant curve and stylish polished chrome finish that works with any decor. High quality brass waterways contain zinc and copper which are known to prevent antimicrobial growth ensuring safe and clean water for your family. Ceramic disc cartridges ensure that the faucet will last. This faucet has a flow rate of 1.8 GPM at 60 psi and includes a matching deck plate.See Full Product Description