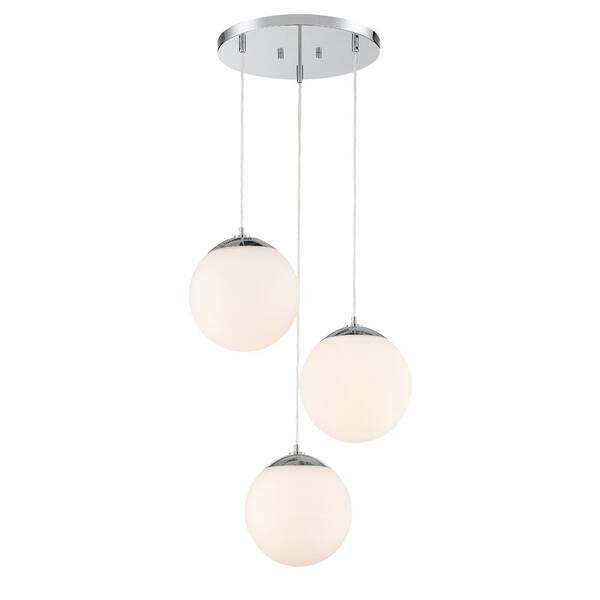 Illuminating in style. The Kelvin collection is bold in its simplicity. Pairs perfectly with Designers Fountain Wiz Colors A19 lamps for that burst of color and excitement. This hanging pendant is designed to be the star of your room. It's designed for easy installation in dining and living areas.

1
Filter by:
Showing 1-1 of 1 reviews
Mar 29, 2021
DO NOT BUY / ZERO STARS
This light was a nightmare from the moment I opened the package. My son came to put this light up for me. He is skilled at putting in electrical units of all kinds. The trouble started when he tried to screw in the minute plastic (tiny tiny) set screws that hold the wire in place in order to adjust the length of the glass globes. A very important part of this light wouldn't you think? The tiny set screws would not stay in unit after being screwed in, they just popped right back out. We went back to Home Depot that day to get better set screws but Home Depot did not carry anything remotely close to what we needed as the set screws had a very small screw pattern. He went back home, no light today. The next day I went back to Home Depot to get an "expert" to help me, still no screws to fix problem and it was suggested I go to another hardware store, which I did. The helper found something that would work after 1/2 hour although they were not set screws, just regular screws and not quite so pretty, but I were desperate. This running around for a tiny screw took me 2 1/2 hours and 50 miles. My son came back the following weekend. We were excited to get this light up. He adjusted the wire appropriately. Now to attach the globes. NOT. The first globe literally exploded in his hand. No one was hurt, but again no light. Home Depot suggested I contact the manufacturer to see if I could get a replacement globe and better set screws. Well that's easier said than done. I emailed them, NO REPLY, I called them, left messages, NO REPLY. I gave them a week to respond to me. NOTHING. I took the light back to Home Depot and got my money back, yeah Home Depot. This light was not cheap, but made cheaply. I suggest it's a no go ever. If those globes can break while someone is holding it in their hand, imagine what would happen if they accidently touched or someone brushed by them. Don't buy it.
by
Showing 1-1 of 1 reviews

The Grant Collection of lights will be sureThe Grant Collection of lights will be sure to have your guests admire your modern sense of style with the beautiful simplicity of its shape and form. The canopy supports 3 pendant lights that can be adjusted to different heights in order to create dramatic levels of lights and shadows. The pendant's clean lines created by the cords and diamond shaped shades makes this the perfect lighting addition to any home that is in need of a chic modern flair. Available in a brass, chrome, or black finish, with either a clear or frosted diamond glass shade, enhance your dining room, living room, or bedroom with the Grant Collection hanging pendant and live in sleek contemporary style (light bulbs not included).See Full Product Description

Galley is a simple modern form that complementsGalley is a simple modern form that complements both coastal decor and commercial style kitchens. The arched supporting frame features overscale metal turnings for an enhanced sense of architectural styling. The linen shades are comprised of rich, satin lining for the feel of a tailored fit and finish to complement the multi-light cluster.See Full Product Description

Delight in this indoor hanging pendants upscaleDelight in this indoor hanging pendants upscale elegance. Luxurious ornamentation features romantic loops whorled into a majestic bulb. Encased in stylish frosted glass bowl shade. Frosted glass, handmade by master craftsmen, is sure to impress with stunning, unique radiance. Light diffuses with a foggy effect reminiscent of winter snow. Glass thickness and weightiness ensures long-lasting durability. Beautifully and evenly finished in chrome. Feel at ease with chrome's high resilience, lasting quality, and stunning appearance. An exceptionally corrosion-resistant material, high-quality chrome provides phenomenal durability and an attractive gleam. Polished to a mirror shine and an immaculately smooth surface by skilled craftsmen. Feel confident in your choice of combined contemporary and classic elegance. Delight in transitional design that complements surroundings and decor with the best of both modern and traditional elements. This piece is beautiful in any home. Complements stainless-steel appliances, islands, bars, dining rooms, kitchens, restaurants, and many other indoor areas.See Full Product Description