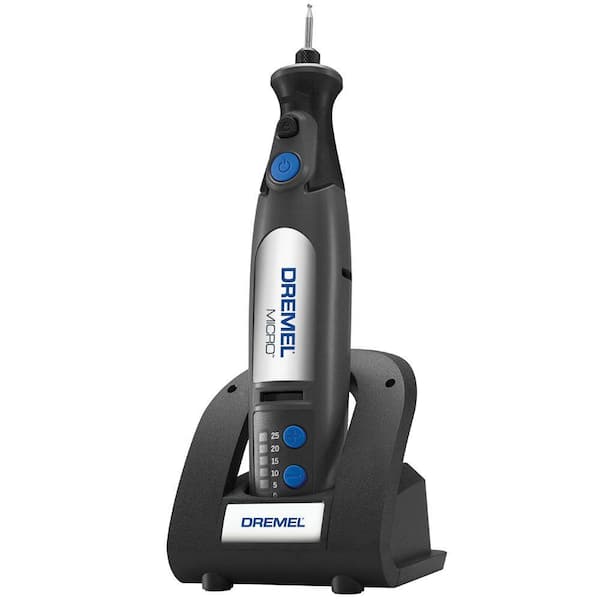 The Dremel Micro is the perfect combination of size, ergonomics and power that make it the ultimate tool for both precise and light duty DIY tasks. Designed to be held between the thumb and forefinger like a pencil, the Dremel Micro allows a grip that is close to the workpiece for superior maneuverability and control. To illuminate projects, the Dremel Micro has LED lights built uniquely into the nose cap to aid in vision and accuracy.

79
Filter by:
Showing 1-10 of 405 reviews
Sep 21, 2021
Light weight
[This review was collected as part of a promotion.] Great, lightweight Dremel. I have small hands and use my Dremel's, contiguously. This lightweight Dremel, doesn't tire my hands so quickly. This is great for my silversmithing and glass etching projects.
by westpc

Customer review from dremel.com
Dec 22, 2020
Quit working
I also have the same problem as the rest I put it on the charger and it shows all blue lights like it is completely charged and also little lights by the collett on top flash. But when I take it off and hit the power button the red light flashes and nothing. Sometimes off the charger one blue light will come on with the flashing red light.
by BSmith85
Aug 4, 2020
DaytonVinny
I Just restored my Silver oil lamp with my Micro, love it. Oh btw the tape on my dremel is to hold that sticker that was peeled of when i took it out of the box, had to take two stars off for funny stuff like this. Hope Dremel helps me out with a spare sticker the dremel works amazing though.
by

Customer review from dremel.com
Aug 6, 2019
Disappointing
After my last electric Dremel took a dive after only a few years of light usage I figured it was just a fluke and bought this Dremel micro because . I quickly figured out I can't push it very hard and i would have to do until my business makes some money ,but now it just won't charge. I tried messing with the contacts on the Dremel and the charger and also tryd a new power cord but nothing's worked . The best i can can get is a bunch of blue lights to show up once in awhile like in the photo. Does anyone have a solution? Im Just very disappointed and in a real bad spot.
by Briant
Response from ServiceAug 9, 2019
We are very sorry the tool has stopped working properly. We are interested in understanding what has taken place and will contact you directly to provide some assistance.

Customer review from dremel.com
Feb 11, 2019
Worked well until it didn’t anymore.
I bought this Dremel about 6 months ago. I only use it for my dogs nails. So it’s not used and abused. And well now it won’t charge even though the blue lights indicate it is. It’s been on the charger for 2 days. And well NOTHING. Kind of annoying.
by Crystal
Response from ServiceFeb 12, 2019
We would agree something is definitely wrong if it will no longer charge - and we are very sorry that has happened. We will contact you directly to help you have that tool serviced so you can get back up and running.

Customer review from dremel.com
Jan 14, 2019
Charged once, never charged again
I bought this about a year ago. Out of the box I had charged it overnight, the next day I began some simple wood carving and the power button started rattling. I thought it wasn't a big deal. As long as I could still power it on, I'd live with the rattle. It basically sat on the shelf for a year and I only used it once during that time- to cut some soft wood. The tool's drive was very weak for that job, and it would shut itself off if it encountered much resistance at all. Today I began cutting some very soft lead and again I found that the tool would fail when meeting anything more than the slightest resistance. The orange light was on, so I decided to throw it on the charger. The blue indicators scrolled for a second then remained illuminated(all lights solid blue). I kept it on the charger for 4 hours with these solid blue lights on, and when I tried it again, the red light was showing on the device and it would die as soon as the tip touched the material. So at this point I don't think it takes a charge at all. I used the device exactly twice, and neither time I used it was it effective at all in performing the simplest task. Now, it could be that I just got a bad unit, but after reading all the other reports of similar failures of the product, I really can't recommend it at all. I'm really regretting this purchase. I really wish that I had just gotten a corded tool instead. Very disappointed and frustrated that I'll have to figure out a different way to complete my project now.
by Cascade Craftwork
Response from ServiceJan 15, 2019
We are very sorry this has been your experience with our 8050. We will contact you directly to provide some assistance and get your tool up and running!

Customer review from dremel.com
Mar 25, 2018
Very Dissapointed.
I received this wireless dremel on February 25th this year for my birthday. As of this review that is less than 1 month ago. Today during use i turned it off and set it down on the charger, and now it wont charge, turn on, or even light up showing its charging. It wasn't even out of battery when i set it down either. Very sad because otherwise i was really enjoying it for detail work...
by Gray88
Response from ServiceMar 26, 2018
We are very sorry the tool has stopped working. We will contact you to get some additional information and supply a solution