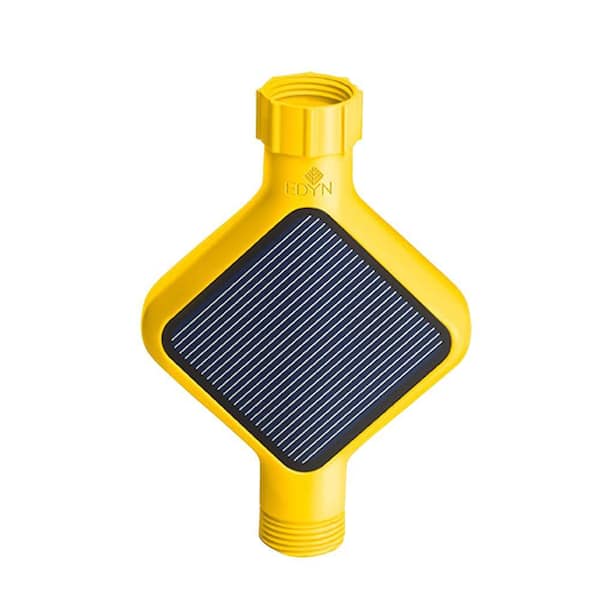 The Edyn Water Valve tailors watering to perfectly fit your plants' needs. It automatically controls your existing irrigation system based on the local weather forecast, the plants you have in your garden, and data collected from the Edyn Garden Sensor. It connects to your Wi-Fi network so you can control from anywhere using your smartphone. Save water, lower your utility bills, and never worry about thirsty plants again.

3
Filter by:
Showing 1-8 of 8 reviews
Sep 3, 2016
Better than the sensor
Valve is beautifully designed and was easy to install and pair with the sensor that I purchased last year. One issue I ran into is that the inlet where a garden hose screws into leaked for me when I first attached it. Applying plumber's tape didn't do anything. Bought a pressure gauge to test my water pressure, sure enough it was at 70 psi, within reason, but also not low. I couldn't find a spec for the valve, but purchased a 25 psi pressure regulator ($5) which I placed before the valve and that fixed the issue. As with the sensor, the one thing lacking with the Edyn products is the software. The only way to interact with the valve is via their app (no website support), and the app is limited. For instance, I wish they had a way to display how much water I've used over a week, month, year, etc. I also wish I could turn the valve on via the app at any time, for example to test end-to-end functionality, show a friend, or when the plants are looking a bit dry (yes, I know I can physically press the button on the valve 3 times to turn it on). One thing the company did very well was shipping. I ordered it and has it the next day. More than I can say for bigger, better funded startups like Automatic, which I ordered the same day and a week later still don't have it.
by
2 found this review helpful
Dec 29, 2017
Don't bother. Looks like they've gone out of business. Both my valve and sensor no longer connect...
Don't bother. Looks like they've gone out of business. Both my valve and sensor no longer connect to their cloud. Support queries are not being returned and the community forum has been taken offline. It's basically a worthless piece of plastic now. Was a very promising device but obviously they could not cope past the start-up stage.
by
2 found this review helpful
Jul 12, 2017
Sounds great on paper
Does this product exist? Have looked for months but it is never available?
by
Jul 29, 2016
Works great, right out of the box.
I was nervous about buying the device given some of the bad reviews for the EDYN sensor, but I went for it and am happy for my decision. I was able to pair the device to my iOS device on the first try, and schedule a watering for 30min from now (the soonest you can out of the box). The watering executed. I like being able to control my irrigation system from my phone, and see if watering have happened. I looks like EDYN has been pretty good with app updates for valve features. I just updated the app version today, and found that the watering scheduling tool was a lot more intuitive, and I could actually schedule a one-time watering. I think I'll try the sensor since I'm interested in the smart watering feature.
by
4 found this review helpful
Jul 28, 2016
Excellent product, does what it promises, with excellent customer support
Clever idea, very well executed by a company that stands by their product and have always been helpful.
by
2 found this review helpful
Jul 27, 2016
Watering automation as it should be!
Easy to install, together with the soil sensor, reliable in operation and carefree thereafter.
by
3 found this review helpful
Jul 21, 2016
Automatic & Easy Plant Care
I started using the edyn sensors last Spring and found the information they send to an app on my phone useful in terms of when I need to water my plants and if I need to move them based on too much/not enough sunlight. I've been using the water valves for a few months now and am beyond happy with their functionality. Before, I had to manually water each of my plants, but now with a drip irrigation system connected to the valves, everything is automatic and so easy. The sensors in my garden let the valve know when to open and water my plants. And, if I want to, I can turn off the 'smart watering' feature in the app on my phone, and edit the watering schedule to my liking. This I've done a few times on extremely hot days, when I want to make sure my trees get extra water. Overall, I am really impressed with how the sensors and valves work in tandem to maintain the health of my garden. My roses have never looked so good!
by
2 found this review helpful
Jul 7, 2016
not ready for prime time
Bought item on July 5 2015. There was no manual included. I installed the app and contacted customer service that gave me web page to get quick start guide. Downloaded pdf and it was of little help. After querying the web I was able to set up the device and connect it to wifi. I tried four different schedules to no avail. I am returning it to the store!
by
6 found this review helpful
Showing 1-8 of 8 reviews