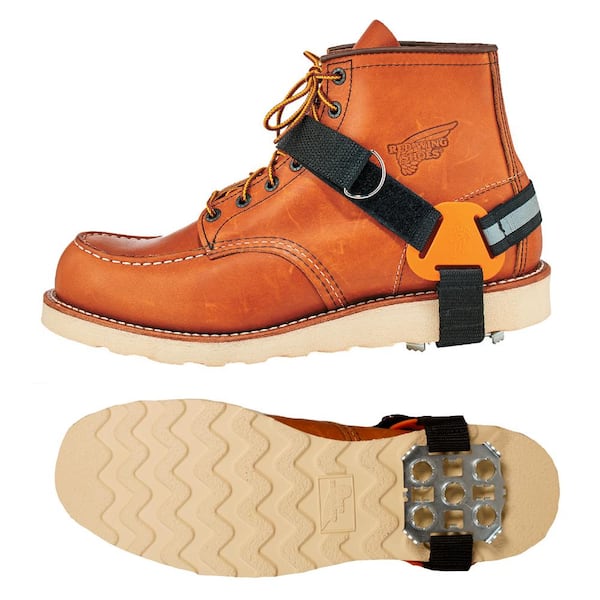 0
Filter by:
Showing 1-4 of 4 reviews
Sep 26, 2014
[This review was collected as part of a promotion.] When I requested the traction device, winter was almost over but in Pennsylvania we often get some nasty weather in February and March. The strap-on cleats were so wonderful, they didn't even allow the snow and ice to appear. Not wanting to wait to try them out, I attached them to my fire boots anyway and wore them for a month on about 15 duty calls. They ranged in climate from mud, rain, dry roads, fire debris and general clean-up details. I figured that is they can remain on my boots during normal wear, they would work well on the ice as well. I learned the hard way about falling on the ice in the form of a loss time accident with a broken and infected finger. Any traction device will work as long as it stays on the boot, these did and I wasn't easy on them. The reflective strip might add a little enhancement but functionally it really doesn't do much in my opinion. The bright orange triangle does make it easy to locate when hanging on the garage wall after a long summer without use. Right now my favorite fishing boots are adorned with the TREX™ 6315 Strap-On Heel Ice Traction Devices. Recently as a huge catfish took of with my rod and reel. but I was able to grab it just before it hit the water, but most importantly, I was able to stop because of having traction. The lack of tread on the soles didn't help a thing, but I didn't go into the lake.
by
Customer review from ergodyne.com
Feb 19, 2022
Good on flat ice; not good other conditions
These stay on my heel well and provide traction on ice. However, I use them in wooded areas with icy/snowy trails. In snowy areas, the snow sticks to the metal plate and builds up to form an icy mound that has to be periodically kicked off to avoid slipping. Stepping on solid irregular objects like rocks, sticks, etc., causes the metal cleat to move off the heel; in some cases ending up on the side of my boot. Also, when walking, you need to constantly keep in mind that only your heel has traction. While these cleats are better than other products that would not stay on my boots, they leave something to be desired.
by
Response from Product TeamFeb 21, 2022
Appreciate you taking time to share your feedback! The heel-only design of this cleat is primarily intended for those who are frequently climbing ladders or hopping in and out of vehicles. If you’re looking for a device that will be more effective for higher activity walking/hiking, we recommend the TREX 6310 Adjustable Slip-On Cleats. These come with a cinch cord that keeps the sling firmly on your shoe regardless of terrain. To resolve fit issues with this particular model, make sure to pull the hook & loop strap as tightly around the top of the shoe (and make sure you have the correct size - M/L: 5-11; XL: 11-16).
Customer review from ergodyne.com
Feb 28, 2021
Great for Kids' Winter Boots!
We've been doing some icy winter hiking in a wildlife refuge, and I could NOT find Stabilicers, Yak Tracks, or any other cleated boot attachment for the kids to keep them safe. These ice cleats were perfect. They are so adjustable that they fit on both children's winter boots--one with big kids size 2, the other little kid size 12. The strap is a bit long but can be tucked in after velcroing. We hiked up a steep section of solid ice and they only slipped when they forgot and used their toes where the cleat wasn't situated.
by
1 found this review helpful
Nov 19, 2013
I wear the cleats every day now that it is icy and love them. I can walk on asphalt concrete and carpet with no problems. Marble and tile floors are a little slippery (have to tip toe). I wear the cleats on the grated metal stairs and they do not catch in the grating. Ice is no problem with the cleats they dig in and hold. I prefer them to a whole cleat or one with spikes that can fall out. These are much easier and quicker to put on and take off less than a minute to do either. You do not have to take them on and off every time you go in and out of a building. I drive a manual car and wear the cleats while I drive. I have no problems operating my clutch, break, and gas pedals with the cleats on. They don’t catch on my floor mats. BEST ICE CLEAT I HAVE EVER WORN!
by
Customer review from ergodyne.com
Showing 1-4 of 4 reviews

Protect your favorite work boots with ourProtect your favorite work boots with our boot saver toe protectors. Simply glue the non-marking guards onto the tip of your boots for maximum protection and extended life. You will receive two flexible rubber non-marking toe guards and adhesive to quickly protect your boots. Available in 4 popular colors: tan, sand, brown and black.View Full Product Description