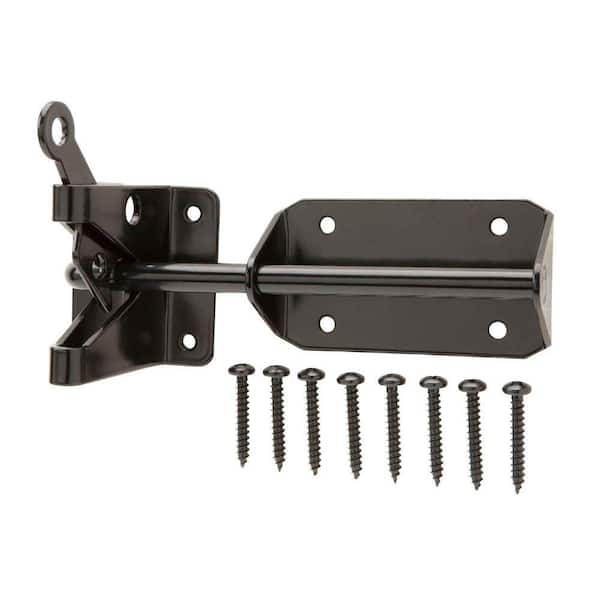 25
Filter by:
Showing 1-10 of 134 reviews
May 23, 2020
Do not buy! Fatal design flaw means it can't latch properly
This latch is totally useless due to a major design flaw. The "tooth" that sticks down from the latch to hold the keeper bar in place is shaped so that as the gate moves in the wind, it very easily pops the bar loose and the gate swings open. You can see in the second photo what a properly designed latch looks like - the notch that the bar fits into curves a little back so that if the bar pushes against it, it holds it shut rather than popping open.
by
3 found this review helpful
Oct 26, 2016
Sturdy latch, but the L post that connects into the 'locking' mechanism has to align just perfect...
Sturdy latch, but the L post that connects into the 'locking' mechanism has to align just perfectly. It would be 5 starts if the L post was either facing up/down or if movable.
by
Jul 27, 2016
Good so far
It hasonly been three weeks since I installed this latch, but it has been perfect so far. The latch feels solid and doesn't sound cheap and loose when opening or closing the gate. I installed it on the inside of my new in-swinging 6ft. wood gate. I paired it with a gate latch wire that runs through a hole so you can unlock it from the front side. The bar has a curve at the end to keep it from having too much slack to move forward and back so that's nice. Also the bar side can sort of act like a handle to place your fingers on/around when using your thumb to unlatch.
by
2 found this review helpful
Nov 28, 2015
Failed after 3 months
It is all steel except for one brass part. That part failed from corrosion after 3 months of very light use. Worked well until it broke.
by
9 found this review helpful
May 14, 2022
Gate won't stay shut
While this is a heavy duty latch, it does not latch well. There is a fatal design flaw where the latch will not stay down. Because there is no "hook" on the latch, the latch easily disengages and the gate easily swings open on its own. This has been pointed out in other reviews (which I wish I had read before buying). This design is so bad and so faulty I'm surpised this even made it to production and is still being sold. Look for something else!
by
Apr 22, 2022
Defective Latch. We re used our old one instead.
Latch is flimsy and opens itself easily. The rod part of the latch is too long so if not perfectly aligned, the curved end hits the strike plate so the latch won't drop shut. My friend ground off the end to make the latch close. AND, the hole intended for the pad lock is located on top instead the bottom. That's lame and I think it's a manufacturer's error. Image on the package shows the hole on bottom, HD website shows it on top. I believe HD purchased defective latches and sold them anyway.
by
Apr 5, 2022
by
Sep 21, 2021
I consider it was an excellent product very well put...
I consider it was an excellent product very well put together. Unbeknownst to me it was a bit too heavy for my fencing. In fact you reminded me that I need to return it four the exact item but a lighter item. I didn't need the heavy duty product. Had I been able to use it I'm sure the product would've served me very well! I hesitate to make the purchase because it is indeed an excellent quality product!
by
Jul 19, 2021
Sturdy latch, but philips head screws are hard to tighten
Even after drilling pilot holes as recommended, the philips head screws provided are very hard to tighten without slipping and damaging the screw. Pretty much impossible to use power tools. If the screws had a torx head or hex head, they would be much easier and quicker to install.
by
Jun 16, 2021
Latch would not hold closed
A light wind would blow the gate open. I've read some reviews saying you must align PERFECTLY for the latch to stay. How about you just buy a better latch that doesn't require the perfect installation... ie any other latch that home depot sells. I installed it, tested it out and I'll be returning it.
by
Showing 1-10 of 134 reviews

The LokkLatch is a quality, yet affordable,The LokkLatch is a quality, yet affordable, pedestrian gate latch for general-purpose gates around the home. LokkLatch also offers a high degree of versatility, as it is adjustable both vertically and horizontally to ensure proper fit and reliable operation. Constructed of industrial strength "metal replacement" polymer & stainless steel components that won't rust. This latch suits all square post gate and fencing materials as well as left or right hinged gates.View Full Product Description

EZ Gate Latch Pull was designed by a careerEZ Gate Latch Pull was designed by a career fence contractor. He created EZ Gate Latch Pull as a solution to his frustration of using strings as a pull with the gravity latch. Strings wear out and break quickly. The EZ Gate Latch is a durable modern solution to reaching over the gate. With its attractive design, its a great alternative to the string and wire pulls commonly being used with gravity gate latches. 1-person can easily install the unit in 10-minutes or less using a drill, 5/8 in. drill bit, screwdriver and wire cutters. It adds beauty and value to your fence project, as well as provide safety for your pets and property.View Full Product Description