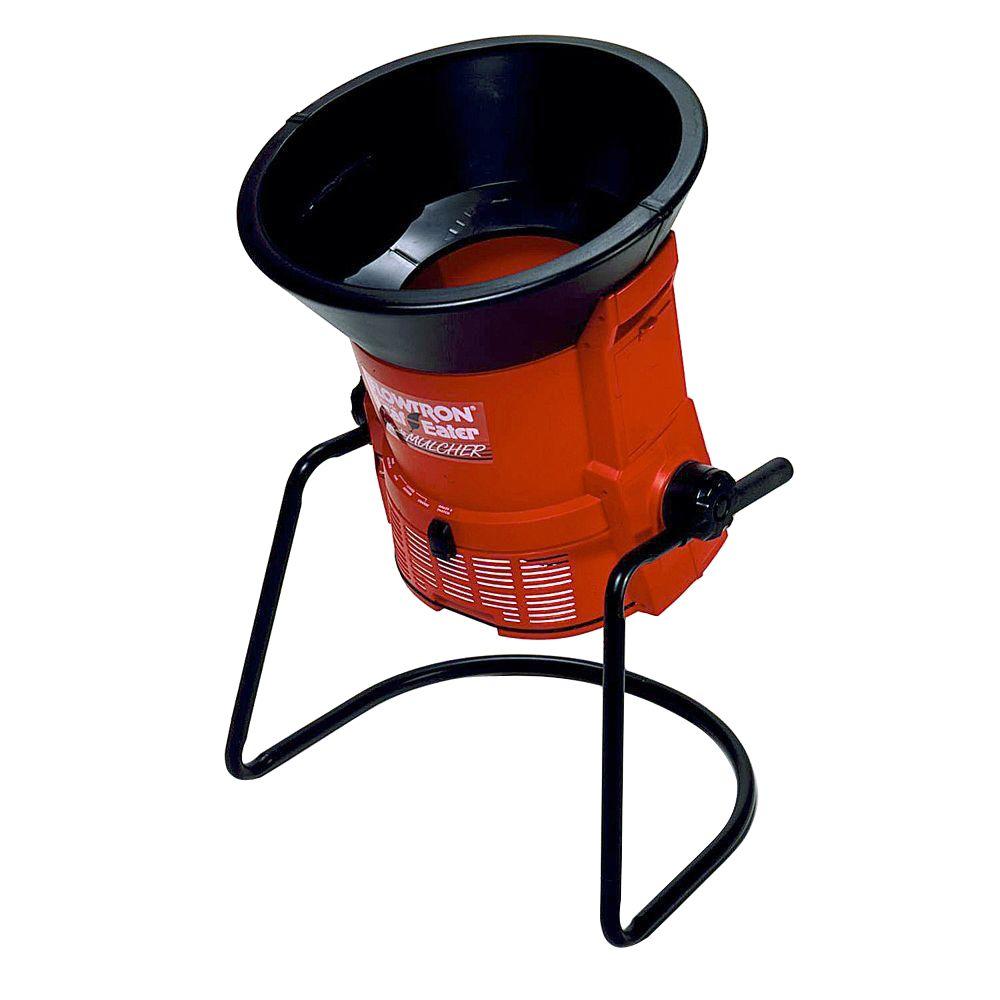 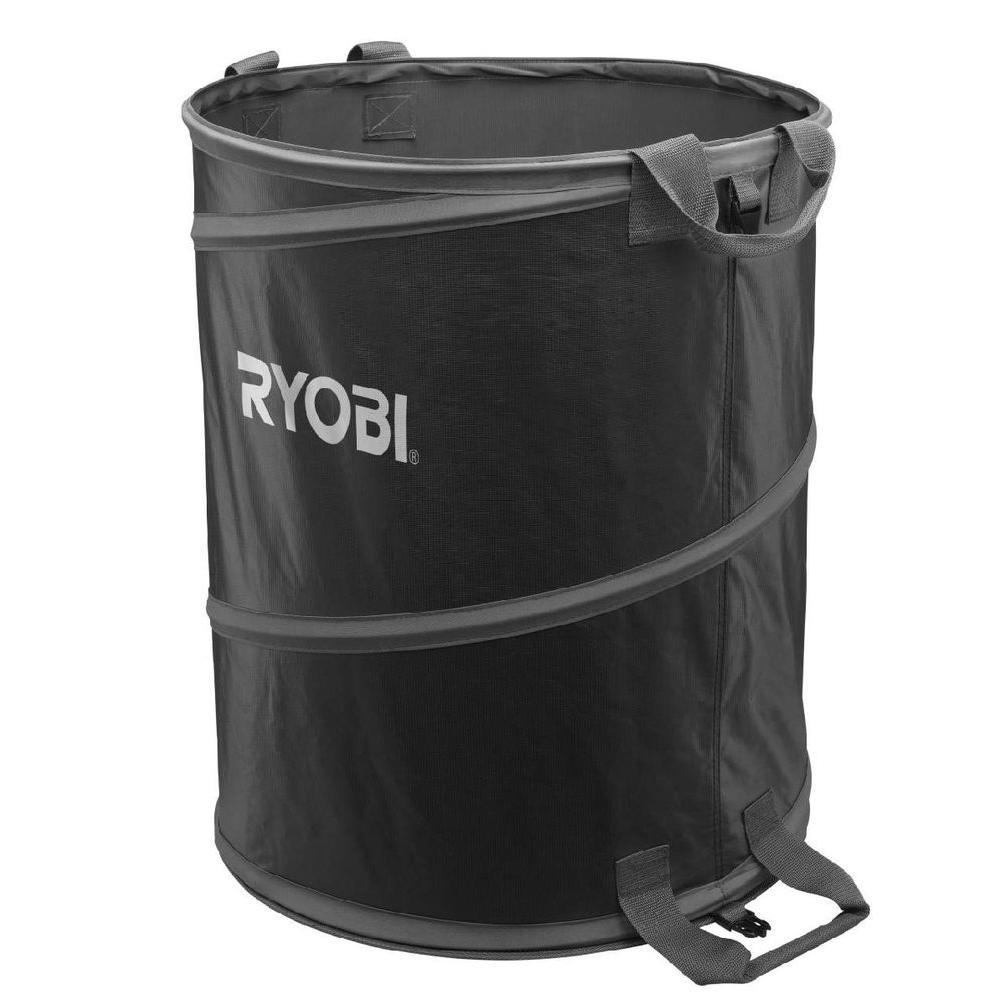 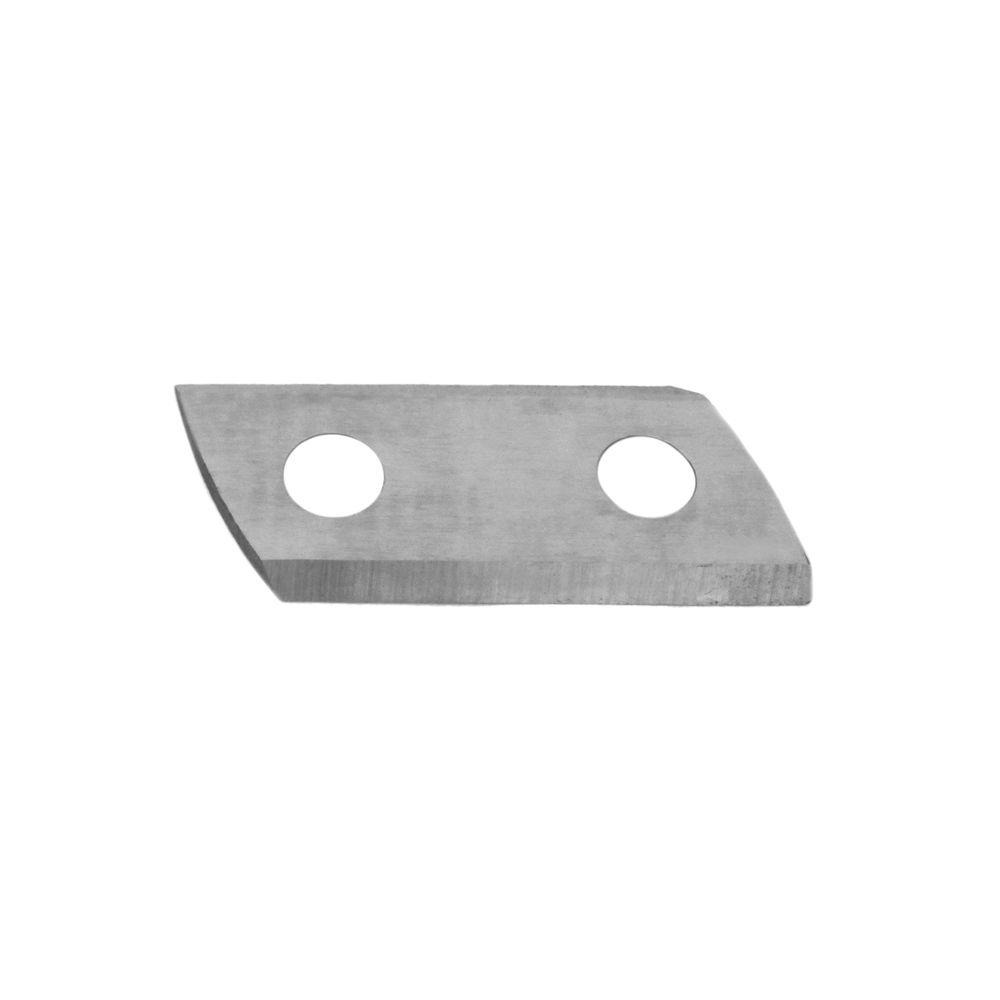 Make a yard of difference and eliminate laborious bagging of yard and garden waste with the Flowtron Electric Leaf Eater. The Leaf Eater quickly and efficiently shreds leaves, pine needles and grass clippings, even paper, wet or dry. Reduce eleven bags of leaves and garden waste down to only 1 bag of nutrient rich mulch. Save time and money on leaf bags and trash pickups. The convenient built-in carrying handles makes the lightweight, portable Leaf Eater easy to mount directly on top of a trash container or use the elastic bungee cord to hold a leaf bag in place. Use during spring, summer and fall for ecological and economical yard clean ups.

This mulcher is corded or cordless?

Will this shred magnolia leaves?

Magnolia leaves are leathery like rhododendron leaves, correct? I think it would struggle. It seems to be designed for leaves from deciduous trees like oaks.

Does it mulish Pine needles? And leafs

Would I have to separate the pine cones from the leaves before shredding ?

Yes, unless they're very, very small. And wear eye protection; this can fling small debris out of the top.

where do i get replacement cutting lines

Nylon cutting strins are available at a majority of garden supply stores.

Is 5 AMPS sufficient to run this machine, it looks the other mulchers have way more amps

Ampere is adequate even with a 100ft 14 ga extension cord.

How good does it chip small branches?

This unit is not designed to chip small branches. Please read instructions before attempting.

Where can I get a replacement filter and filter housing?

Other garden shop retailers who merchandise this product have these items you may order on line.

will this handle vine type material

Nylon string used with this unit will not shred vines and vine like material.

So it does not mulch pine cones. Does it at least not self destruct when one or a few sneak into...

Nope, it self destructs!

(12)
Sort By:
espectro1931
Leaves be Gone.
December 12, 2018
I debated over similar products for a while. After doing some research i opted to buy this over other brands, based on reviews and online comparisons. Price was still higher than I wanted, but so far its worth the money. It was easy to assemble and use. It took me about 15 minutes to put it together, the instructions are as easy as 1,2, and 3. Took about six bags of dried leaves and turned it into useable mulch in about 45 minutes (I did run the leaves through multiple times to get them as shredded as possible) which I just then spread into the lawn. Very happy with the purchase, it beats gassing up my lawn mower after already removing the gas, storing bags of leaves until the spring, and/or paying and additional sticker per bag to have them go out with the garbage.
Was this helpful?
5
0
franklyspeaking
Montreal, Quebec, Canada

Not bad but.....
February 16, 2015
Features :
3
Quality :
2
Ease of use :
5
Value :
3
I have used this LeafEater on 2 weekends for the equivalent of approx. 80-90 bags of un-shredded leaves (e.g. used about ½ of the cutting lines supplied). Here are my comments: 1) On assembling legs #17 & 18, the wing nuts #43 were 8-32. I had to re-tap them to 10-32 to match the screws #42. 2) I also had to enlarge the holes in legs #17 & 18 to .203” dia for the screws #42 to pass through. 3) When attaching the funnel #1 to the main housing, one of the funnel halves developed a crack. 4) After some shredding, I removed the air filter #34 and noticed quite a bit of dirt that had collected at the bottom of that cavity (see pic #1). 5) After removing that dirt with my shop vac, I saw daylight (pic #2). 6) That means, dirt can get into the air supply duct to the motor directly from INSIDE of the housing (see pics #3 & 4), rendering the filter almost useless. 7) I’ve closed these openings as good as I could with duct tape (see pics #5 & 6) and after finishing all the rest of the remaining leaves, that area still looks pretty clean. However, this is not a solution and those gaps should never have existed in the first place!!! 8) Toward the end of my shredding, I noticed the spinner wobbling more and more and the rumbling sound of it getting louder. It looks like the upper bearing of the motor is badly worn and needs to be replaced (see pic #9). That is also the reason for returning this “Leaf Eater”, as I don’t think it would last another season and by that time it would be off the warranty. 9) When, after finishing the job, I wanted to remove the funnel from the main housing for cleaning and applied some pressure with my thumb, the funnel cracked at that spot. This material is just too brittle and not flexible enough! See also comment #3) above. Summary: The idea itself is good, but not well thought out. It is a flimsy design and needs some improvements. One can not feed the leaves by large handfulls, I had to hold them over the funnel and slowly “sprinkle” them in. That way there was a constant supply of leaves to the cutting lines and the motor never had to labour. It is slow going and I could live with that, but not with worn bearings!!! With other words, yes it is a flimsy design, not a “heavy duty” machine, but one can manage as long as one does not overload or rough-handle it. I would gladly buy another one, as long as all of the problems mentioned above have been rectified.
Pros: Easy to Use, Good Size & Weight, Mulches Well, Light Weight, Easy to Store
Cons: Not Durable, very flimsy and fragile
Was this helpful?
28
0
Grizz
Locust Grove, VA
Just what I needed
December 12, 2014
Features :
5
Quality :
5
Ease of use :
5
Value :
5
Once you get the hang of feeding leaves into mulcher you can make quick work of the leaf pile. I use my "Sunware" big grab hands to feed the leaf eater. It makes great mulch. Replacing cutting bands is quick and easy. No more bagging and lifting of leaves. Mulcher is easy to move around the yard.
Pros: Easy to Use, Mulches Well, Good Size & Weight, Light Weight
Was this helpful?
2
0
Leafguy
Roxboro, QC
design needs upgrades
November 14, 2013
Customer review from homedepot.ca

The design of this unit could have been better. Assembly: The first thing is that the black cone shape should have come as 1 piece instead of 2. You need to line up pins on both halfes and they all snaped on me. Also it wasn't user friendly to attach this cone to the housing, pins did not line up properly due to its cone shape and the pins snaped at this location as well. Would have been simpler if this cone was screwed to the housing instead of plastic clips that ended up cracking the plastic when I tried removing it to realign the pins. Operation: inside the unit were the cutting lines are, they should have put a circular piece of sheet metal liner about 5" high to protect the outer shell from flying debris. A small branch hit the plastic housing wall which isn't very thick in my opinion and made a good size hole right at the seam (see photo) the chunk of plastic flew about 10 feet away. Luckily it wasn't in my direction. They do have great customer service to replace these parts, but I'm disapointed considering that this machine was built in the USA. Needs re-engineering and design upgrades to work out these bugs.
Was this helpful?
0
0
Km
I love this item. it allows me to recycle our...
January 9, 2021
I love this item. it allows me to recycle our leaves and make lots of my own shredded leaf compost. it has its limits- you have to separate twigs and branches and you have to add leaves slowly, but I've been using these flowtrons for 18 years and couldn't garden without them. they last quite a while; this is my third in 18 years. the motor gave out on the other two after about 5-6 years of hard use.
Was this helpful?
0
0
MM
The Flowtrown was not easy to put together and cheaply...
November 13, 2020
The Flowtrown was not easy to put together and cheaply made. But run good went mulcher leafs.
Was this helpful?
0
0
HomeDepotCustomer
i used it once so far for about two hours....
October 23, 2020
i used it once so far for about two hours. It worked great. I have a lot more leaves to go. Will see how it holds up.
Was this helpful?
0
0
RG
After just a few light uses this unit failed! ...
October 8, 2020
After just a few light uses this unit failed! I'm taking it back and I am very disappointed with the quality of the motor that just up and quit!
Was this helpful?
1
0
PAhomeowner
Finer mulch than with a mulching mower
September 14, 2020
Features :
4
Quality :
4
I had the predecessor to this one and with a lot of leaf shredding went through two motors, but those motors went through a huge amount of leaves, so that is not a negative. How many leaves? Well, while waiting for a new motor, the pile grew to 30 feet long, 5 feet wide and four feet high. And that was before the township started a regular leaf collection. Now, once they start, they collect several times a week. Years later, my neighbor offered me his, which is exactly what is pictured here. The drawback was with this model one really needed either a leaf bag, or stood next to it, which is not as nice, as one will get shreds of leaves all over your shoes. The earlier model had brackets so one would fit it atop a 50 gallon trash container. This season, leaves are falling in abundance, and there will not be any township leaf collection until much later in the season. So I got it out, and in conjunction with a leaf sweeper to collect the leaves, did some shredding. It works best to feed in amounts of leaves rather than packing leaves in and turning on with switch. Compared to using my mower with the mulcher, the leaves come out very fine in comparison. But to be honest, this is a hands on approach to mulching leaves but for a compost pile, gives a better start. It is best with rather dry leaves.
Was this helpful?
0
0
HomeDepotCustomer
Rating provided by a verified purchaser...
July 31, 2020
Rating provided by a verified purchaser
Was this helpful?
1
0
Review this Product
Share your thoughts with other customers 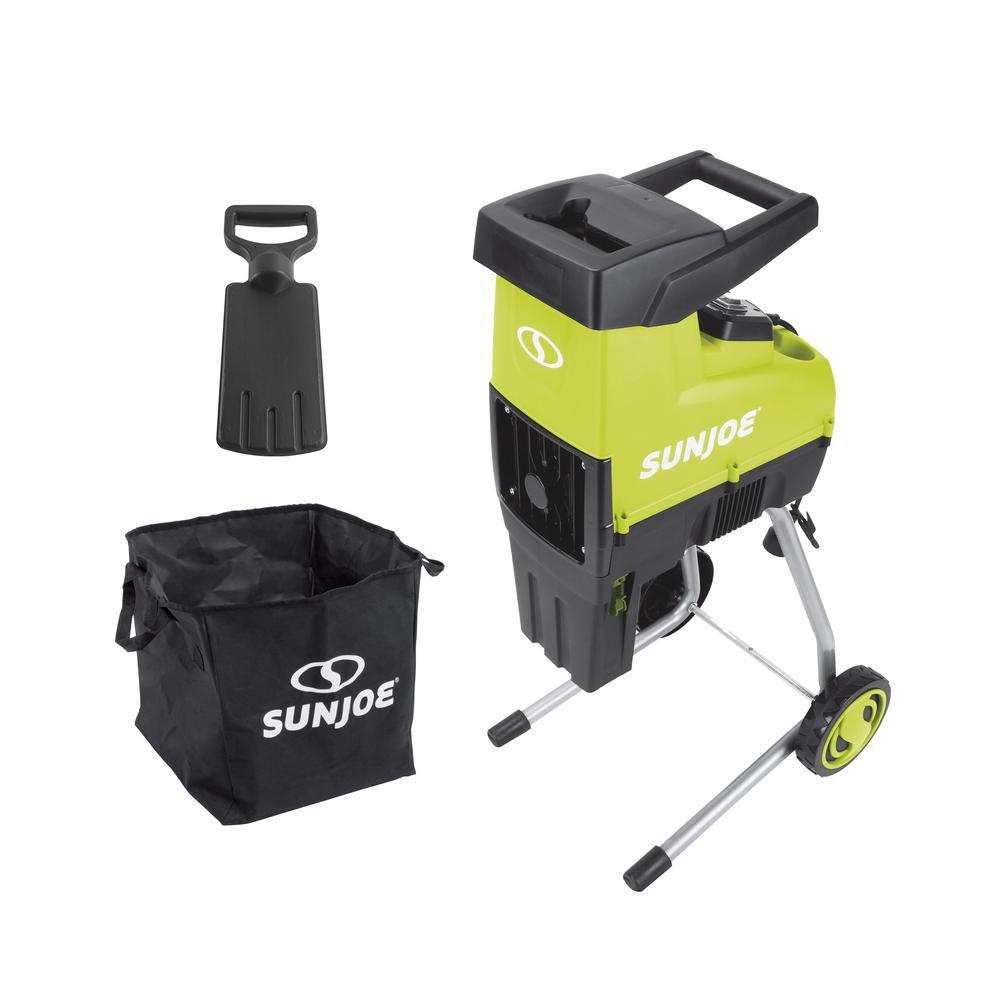 Reduce, reuse and recycle your yard debrisReduce, reuse and recycle your yard debris with the new Silent Electric Wood Chipper + Shredder from Sun Joe. With a 15 Amp electric, eco-friendly motor, the CJ603E is perfect for turning leaves, twigs, brush and branches up to 1.73 in. Dia into nutrient-rich mulch. With a reduction ratio of 21:1, your yard and garden will be the envy of your neighborhood. Easy to assemble and virtually maintenance-free, this powerful electric wood chipper is ready to go when you are. And with its built-in safety stop that automatically engages when the hopper is opened, you'll feel at ease shredding your lawn debris. Clean up your yard, enrich your garden and Go With Joe.Product Details