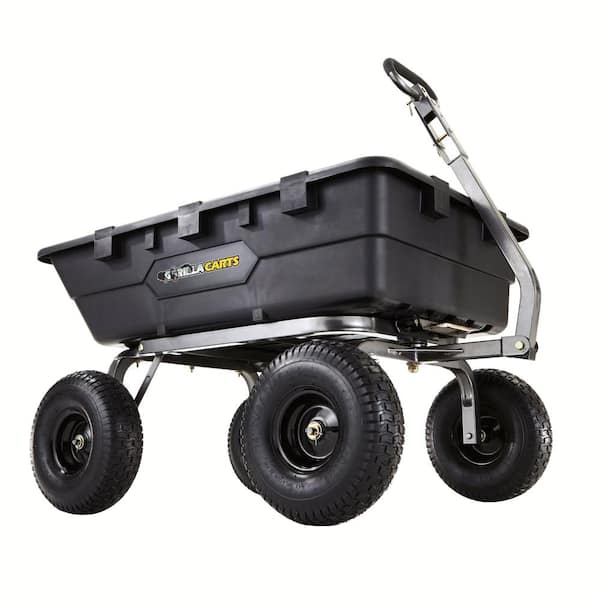 The newly-designed Gorilla Carts Heavy-Duty Dump Cart has an innovative, updated frame design that makes it quick and easy to assemble. Improved maneuverability and rigidity gives the cart a tight turning radius. Haul more with each load and finish the job faster and more efficiently with the high-strength poly bed and 10 cu. ft. capacity. The patented 2-in-1 handle with durable grip allows the cart to be hooked-up and towed behind a lawn tractor or ATV or pulled easily by hand. Heavy-duty 15 in. pneumatic tires keep this workhorse on the move and the patented dump feature allows the bed to tilt for easy unloading while keeping the cart balanced to prevent tipping. With a hauling capacity of 1,500 lbs., the GOR10-COM is the largest in the Gorilla Carts line of dump cart.

Built to do it all, the Multi-Use Cart withBuilt to do it all, the Multi-Use Cart with 1,200 lb. load capacity by Gorilla Carts is highlighted by its innovative dumping feature. Unload dirt, rocks, mulch, logs and more, and enjoy its heavy-duty, 13 in. turf tires that can handle any terrain. Easy to use, it features a patented quick-release handle to minimize strain. An exclusive 2-in-1 handle allows the cart to easily be pulled by hand, or quickly converts to be pulled behind a lawn tractor. It also converts into flatbed cart when you remove the sides. Offering an alternative to a wheelbarrow, industrial-grade steel construction and a great combination of steel cart durability and dump cart functionality, this cart is ideal for your lawn, garden, farm, or barn needs.View Full Product Description