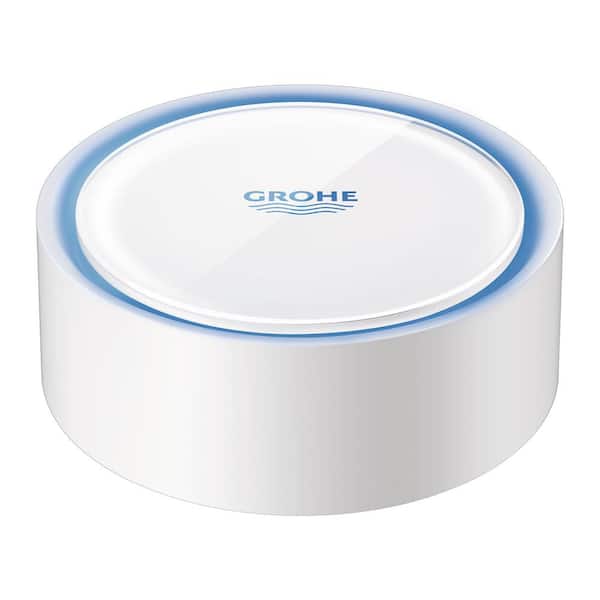 The innovative GROHE Sense water detector alerts you the moment unwanted water leaks appear with a pulsating red light and buzzer, in addition to an alert which is sent to your smartphone via the Ondus App. This early warning allows you to take immediate action before a simple leak becomes a flood. The Ondus App also provides daily updates on changes in temperature and humidity to help prevent frost damage and the spread of mold. Perfect in the kitchen, bathroom, laundry room, anywhere a water leak could pose a potential problem. GROHE Sense uses 3 AAA batteries and connects to your home Wi-Fi network.

Customer review from GROHE.us
Oct 20, 2018
Piece of Mind
[This review was collected as part of a promotion.] I set-up the GROHE SENCE leak sensor in my laundry/kitchen area. I encourage buyers to follow the set-up directions to avoid confusion and Wi-Fi connection issues. The leak sensor appears to function as advertised: give notification of liquid touching the sensors and allows users to view 24H averages for both temperature and relative humidity near the device via the GROHE APP. For larger homes, I would encourage the purchase of multiple GROHE SENCE leak sensors.
by

Customer review from GROHE.us
Oct 19, 2018
Easy set up, well designed app, nice packaging
[This review was collected as part of a promotion.] Excellent design and very easy to set up. Tested this in the sink to see how sensitive it is. Worked every time I tested it. The app is quite easy to install on your phone (I have an Android). The app provides warnings for humidity, temperature as well as moisture. Packaging was very nice as well. In short, a very simple device that will help avoid potential damage from water. I'm using mine in our laundry room, placed on the floor next to our washing machine. Highly recommend.
by

Customer review from GROHE.us
Jun 1, 2021
just saved my day
i added sense by the water heater and there was a lesk last nught. Sense alerted me and saved my condo today. Must get item for condo owners.
by

Customer review from GROHE.us
May 20, 2020
The Sensor did detect water when I tested it on a wet cloth . I got an aler...
The Sensor did detect water when I tested it on a wet cloth . I got an alert in my email and App on my phone . Unfortunately the audible part (2 short beeps on and off till you clear it ) of the device isn’t loud enough by a long shot . I placed it next to my sump pump which is just under our bedroom and when the alarm was triggered I couldn’t hear it .During the day that wouldn’t be a big deal as I have my phone all the time but when sleeping I probably wouldn’t hear the email alert . I sent email to the company they should make it as loud as a smoke detector. I returned the unit and will be trying another with a louder db level.
by
Apr 16, 2020
Initial install was frustrating; paper instructions were useless. Grohe leaves you a 5 minute win...
Initial install was frustrating; paper instructions were useless. Grohe leaves you a 5 minute window to complete the install (which requires you previously installed the app, and setup an account), taking nearly 2 minutes in before the device wifi signal showed on my iPad. Once completing the initial connect and assigning to the router, data transfers and has to be processed - first few tries the 5 minutes were up before the connection finalized and had to start again. Did get it connected, and tested in location with water, observing both visual/audible alert as well as emails and app notifications. The online pdf manual I found was nearly 200 pages long, in almost as many languages. The table of contents pages did not seem to line up with the actual content, so I had to page through all of it looking for English. Two days later, I had to reboot the router. Exploring the app, could not find any specific way to confirm whether or not device was connected, but the app showed a temp and humidity reading. Eventually tested with water on device, and while the visual/audible alert sounded, never triggered an app warning, app alert or email. Removed batteries for extended time; app still shows a temp and humidity reading, and 100% battery level - no indication at all that the device is not active. Reinstalled batteries, went through the install process again. Used a different device name so as to know the second try was truly connected, and (again after numerous tries) finally connected, even got an email (or app alert?) stating a device had been added. Tried water on the device, and no app alert or email. Looked for web based account to manage device, but never found (many web accounts seem to be more robust than apps). The apps (the PDF referred to one app, which itself then directed me to a second app) were pretty bare bones. After that second install, tried several times over the course of a day to connect and restart, with no luck. Even created a second account, thinking maybe a fresh start would work; nope, complete the process (after numerous tries), but no more alert that device added, and the blue flashing lights kept going. While it seems trustworthy enough for the local visual and audible alerts, having paid for a device that promised wifi connection and alerts on my phone anywhere, but not getting there, I’ve had enough. The Grohe Sense is going back as soon as I can find the time.
by
Response from Grohe Customer CareApr 17, 2020
Hello, thank you for your feedback on this product and we apologize for the experience you have had so far. Please contact us at grohetechcare@lixil.com and we will be able to have a technician contact you to help complete the installation of the product.

When moisture is detected, the Zircon LeakWhen moisture is detected, the Zircon Leak Alert Wi-Fi will sound a 105 dB alarm, emit a visual warning by flashing an SOS, and will send an email via your Wi-Fi connection to up to 5 addresses; warning you of the water leak and potentially saving you thousands of dollars in water damage repairs. The Zircon Leak Alert Wi-Fi eliminates the need for all the expensive accessory equipment by operating on a hubless platform. Each unit operates independently of each other and can be individually named- allowing for an infinite number on units to be on guard protecting your space from water damage. Should a flood occur, the Leak Alert unit will float and continue to sound the alarm until the problem is resolved, or the battery is exhausted. Each Leak Alert Wi-Fi unit requires a standard 3v lithium battery (included). To keep your unit running optimally, Zircon designed the Leak Alert Wi-Fi to chirp and send an email notification when the battery is running low and needs to be replaced. To configure the Leak Alert Wi-Fi , youll need an established Wi-Fi connection and password (if applicable) and a Smart Phone, tablet, or Computer thats also connected to the Wi-Fi ne2rk. Then, simply follow the directions provided to connect to the Leak Alert Wi-Fi Unit, name the unit, and provide the emergency email address youd like to have notified when the alarm is sounded. Protect your home and work space by placing a Zircon Leak Alert Wi-Fi unit anywhere water leaks may occur.See Full Product Description

Don't ever worry about leaks or floods inDon't ever worry about leaks or floods in your basement, under your sinks, from your water heater and anywhere else around the house. PHYN smart water sensors alert you audibly, visually and with SMS and app notifications to your phone the moment they detect water. Set your own alert thresholds for potentially damaging high and low humidity in the free PHYN app and customize settings to maximize battery life. Easily connects via Wi-Fi to your home network, no hubs necessary. Batteries included.See Full Product Description