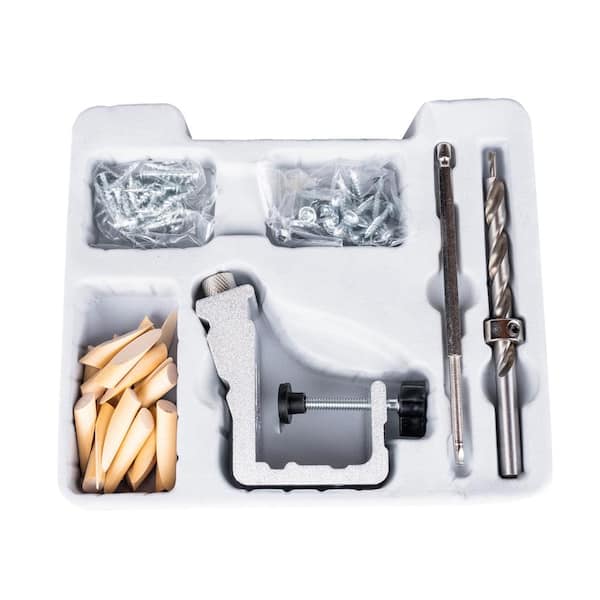 15
Filter by:
Showing 1-10 of 99 reviews
Sep 16, 2014
Great Idea, TERRIBLE Quality
I am about to return my 2nd one of these. The first kit lasted for 5 holes before the tip of the drill bit broke off. Basically, the kit's entire problem is in the poor workmanship of the metal guide holes. The angle isn't quite right, leading to the drill bit scraping the edges. Between the tiny metal fragments and the heat/speed of the bit, it creates a tiny metal "barrier" inside the guide hole and renders the product unusable. I figured it was a faulty drill bit / metal guide piece in the first kit, so I went back to Home Depot and exchanged it for another kit. This time, I examined the metal guides a bit closer before using them. 1. First thing I noticed is that the holes were not the same shape as the first kit's. The first kit seemed to have two holes that both had different angles (you could easily tell just by eyeballing the height of the opening). I figured this was intentional. The second kit's exit holes were almost identical in height. I used both and they produced nearly identical drilled holes, which was a different behavior from the first kit. That's shoddy workmanship right here - two products behaving THAT differently. 2. Second thing I noticed is that the exit holes on the 2nd kit were not uniform in shape. I'm not sure how they were manufactured, but there were imperfections all around each exit hole. Again, shoddy workmanship / manufacturing. You can see this in the photo I've attached. 3. The second kit lasted for 9 holes before the same metal barrier cropped up again. The second guide hole didn't work at all. The result was just a burning smell and a bunch of metal dust all over the semi-hole in the wood. This is particularly frustrating - a total of 14 holes drilled between two kits and two separate trips to Home Depot. 4. I did not use any of the "coarse" screws but the "fine" screws were about 50/50 in terms of getting a good one. After the 6th screw, the next three had imperfections in the threading of the screw, basically resulting in a rough hole into the wood instead of a tight coupling. After FINALLY getting them out, I switched over to some similar-length wood screws I had bought for a different project, and those worked a LOT better - even better than the first ones that seemed to go in fine. In the end, the only usable piece was the drill bit from the 2nd kit. Instead of driving to Home Depot for a 3rd time to exchange the kit AGAIN, I just ended up carefully eyeballing the angle and manually drilled in the last few holes. It worked well after I did a few test holes, but it definitely was not as clean and uniform as I would have gotten if the metal guide simply worked as it should. I cannot recommend this product to anyone. Despite the name, there is nothing "pro" about the quality of this product. It's a very cool idea, and if it were manufactured better, I would definitely keep it.
by
38 found this review helpful
Apr 3, 2012
Great tool, easy to use
I read the reviews between this and more expensive products before purchasing for about two weeks. I decided to purchase this to work on a project of building a queen bed. Boy am I happy I did. The tool was easy to use, just slap in the board and make the pocket holes. I did make a few mistakes on some scrap pieces and did see some metal shavings, but that was more my inexperience than a flaw in the tool's design. Hold the drill level, everything works great. Once I figured it out on the scraps of wood, I was making every joint with pocket screws and gorilla glue. I am happy with the way the project turned out. I was able to turn a 4 or 5 day project that would have used dowels and glue into a 2 day project using this pocket screws and glue. I have attached a picture.
by
69 found this review helpful
Apr 13, 2022
by
Mar 22, 2022
As expected-good value. Arrived quickly....
As expected-good value. Arrived quickly.
by
Dec 17, 2021
by
Oct 6, 2021
by
Jul 29, 2021
Rating provided by a verified purchaser...
Rating provided by a verified purchaser
by
Jul 27, 2021
Did what it was supposed to...
Did what it was supposed to
by
Jul 23, 2021
Rating provided by a verified purchaser...
Rating provided by a verified purchaser
by
Jul 10, 2021
Rating provided by a verified purchaser...
Rating provided by a verified purchaser
by
Showing 1-10 of 99 reviews

Since 1910, General Tools has grown to becomeSince 1910, General Tools has grown to become the recognized industry leader for specialty hand tools and instruments. This General Tool Pocket Hole Jig Kit enables you to produce strong, attractive joints in a multitude of applications, eliminating clamping and gluing. Easy to use for DIYers and expert craftsmen, with 2 quick steps, use the jig to drill steeply pitched counter bores in 1 joint member, then, drive self-tapping screws (without pilot holes) into the other member.View Full Product Description