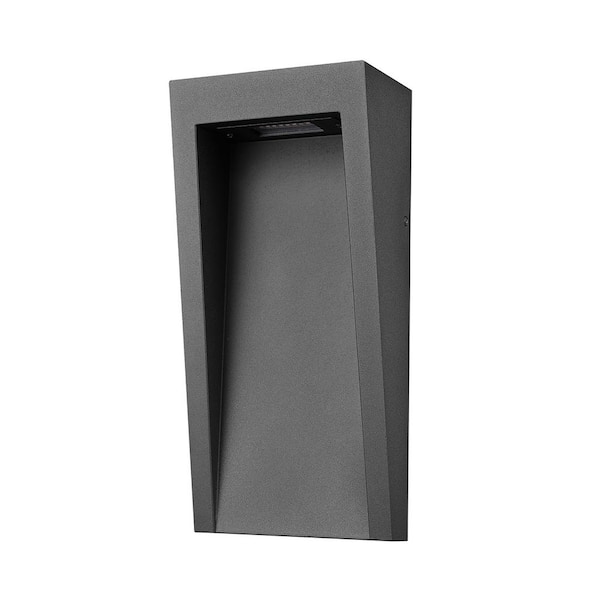 The Vincent LED Integrated Outdoor Wall Sconce will impress you with it's sleek minimalist design. A modern rectangle shape maximizes your outdoor living space and creates a trendy urban area you'll love to lounge in. The streamlined design makes a huge impact while leaving room on your walls for other decorations and self expression. Plus, the integrated LED provides a soft but bright light and saves you money in the long run. Simply put, the Vincent Wall Light is ideal for condo balconies, bedside lighting and micro living spaces - what more could you ask for.

0
Filter by:
Showing 1-5 of 5 reviews
May 28, 2021
The Globe Electric Vincent 1-Light Matte Black 12-Watt Integrated LED Outdoor/Indoor Wall Lantern is a modern-looking lighting fixture and it is easy to install. The light is not as deep as most outdoor lighting fixtures and it looks more like a wall pack and takes much less space. I like that it uses LED technology and saves energy. The light shines down and gives a very unique light distribution. I wish Globe could add a dusk-to-dawn sensor to the light so it will turn on/off automatically. This is a good product.
by Typicaldude

May 21, 2021
The clean, modern design is what attracted me to this fixture. Its black, angular cast aluminum housing makes for a unique appearance against a white background—and it provides good light output. The 12-watt, 3000K color LEDs provide 500 lumens of light using a 27 LED module. I expected a dramatic appearance the first night I turned it on, but I was disappointed. See photos. The bright, concentrated light produced undesirable reflections from the plumbing fixture spout above an outdoor sink. There is no diffuser over the module which may have eliminated or reduced my issue, which may not be an issue for everyone. The online info says that the LED module/driver is dimmable. The fixture would make a great light mounted on a column and its flat top would make a good drink holder. The fixture is 12-3/8” tall, 5-7/8” wide at the back and 5-5/8” wide at the front and projects 3-1/2” from the wall at the top and 1-3/16” at the bottom. The fixture comes with all mounting hardware for a standard round or octagon junction box. The fixture is rated for indoor and outdoor use. The instructions say that the perimeter should be sealed to the mounting surface with clear silicone for exterior applications. I also noted that the top of the fixture is flat which means that it will not shed rainwater. My application was to illuminate a hand washing station on the outside wall of an outdoor shower. The fixture was designed and manufactured by a company headquartered in Canada but was made in China. (When the package arrived, there was something loose inside. After unpacking the fixture, I found that the driver module was not attached to the back of the fixture. Apparently during assembly, the screw holding one of the two retaining clips sheared off and rather than repairing the fixture, the broken screw and clip were discarded the fixture was packaged anyway. I emailed the company with an attached photo and they responded within 15 hours and said I should receive a replacement in 2 to 3-weeks. I believe that this was a rare instance.)
by Greensyn

Bring modern style to your home's exteriorBring modern style to your home's exterior with the Westinghouse Matthew LED outdoor wall sconce. This outdoor wall light's geometric design in a nickel luster finish is also suitable for indoor rooms. The energy-saving integrated LED lighting diffused through frosted waffle glass will provide beautiful illumination for many years. Decorate your front or back entryway or add decorative patio lights or porch lights to your home. Perfect on a balcony or next to a garage door. This Westinghouse wall mount fixture is backed by a 5-year manufacturer's warranty against defects in materials and workmanship. Westinghouse is a trusted, global brand. Westinghouse knows lighting and offers products with exceptional quality, reliability and functionality. Product reference number 65792.See Full Product Description

This stylish LED wall light features a blackThis stylish LED wall light features a black metal frame and seeded glass down shade. The LED module is built-in to the fixture, so no bulbs are visible. The contrasting sleek black finish and see-through glass paired with the square shape of this outdoor light will add a modern, contemporary feel to any outdoor living space. The long lasting LED technology produce 700 Lumens of light making this outdoor wall sconce ideal for lighting up walkways, porches, driveways and more.See Full Product Description

This 16 in. medium size outdoor wall sconceThis 16 in. medium size outdoor wall sconce exhibits a contemporary tone that allows the lantern to stand out as both functional and decorative. This stylish LED outdoor fixture features a black, weather resistant metal frame and a frosted white acrylic shade. The integrated LED module means that bulbs will never have to be changed. The size and rectangular shape of this outdoor light is ideal for illuminating porches, back patios, or for mounting on either side of a garage door to provide supplemental driveway lighting.See Full Product Description