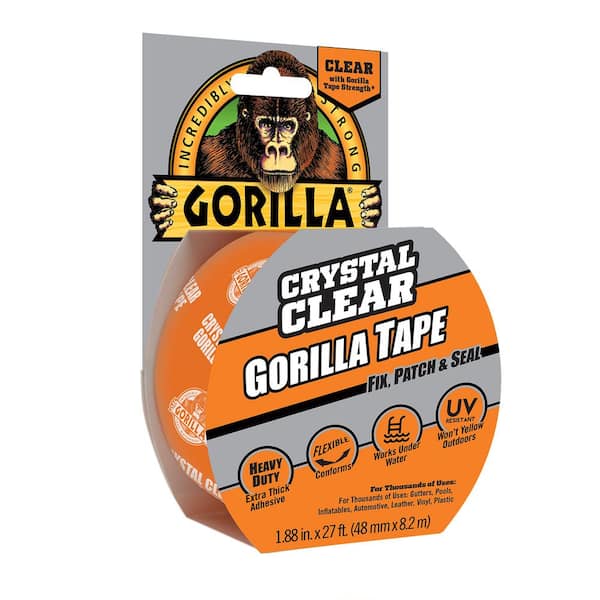 Can this be used to cover a hole in the windshield-wiper fluid line? The line has zero pressure e...

can you paint over the tape

Hello, We do not recommend attempting to paint over Crystal Clear Gorilla Tape. If we can be of any further assistance, please contact our Support Team at 800-966-3458 or visit our Contact Us page at www.gorilltough.com/contact. Please be sure to provide case #429251 when contacting our Support Team. Thank you, The Gorilla Glue Company

Will it sick to silicone

I would highly doubt it. It didn't stick to plastic at all

Can this be used inside an igloo water cooler for potable water?

Should be able to as it is waterproof.

Will it adhere to clothing an be waterproof?

In a pinch i think, but it would not be permanent. It's like very thick cellophane tape.

Is this acceptable for anti slip in bathtub?

No it is a sealing tape. You seal packages with it.

Can you use to hold carpet in place on stairwell

No it is not double sided. .

My Sunbrella awning developed 3 small tears. Can I use this to patch?

Can this tape be used to tape the seams of an Owens Corning foam board used to insulate a basement? If not what kind?

Hello Vickie, Crystal Clear Gorilla Tape is not recommended for use on seams. If we can be of further assistance, please contact our Consumer Affairs team at 800-966-3458 or through our website at www.gorillatough.com/contact. Thank you, The Gorilla Glue Company

5 people found this helpful
Jun 25, 2014
I am impressed!!!
I am impressed!!! This tape is considerably thicker than any other clear tape I have used. It is easy to apply and produces a strong bond immediately. I am excited to see just how durable it is. A friend said he's never heard of Gorilla clear tape but has used the Gorilla colored tape in an emergency situation to hold up his broken car window for a long journey home. He made it home, the car sat for a couple of weeks in very hot weather and the tape held!!! I'm expecting the same positive results from the applications I've tried.
by nevadalady

5 people found this helpful
Jun 18, 2014
Super sticky tape
This tape is clear and is super sticky. I recently dropped my phone and there was a spider vein crack on the back. Tried using this to seal it so the crack wouldn't spread. The take is thick with super sticky glue. I wished it was labeled on the tape so I can easily distinguished it from other normal clear packing take. Like for repair wording or something like that.
by allthingsvu

5 people found this helpful
Jan 5, 2014
Strong bonding, Clear hard to see after application.
I use different types of tape daily, lots of it, for packing and household projects. The first thing I noticed was the bonding quality was very strong. In my first project, It was used for a temp repair of a an auto tail light plastic cover. As pictured, it can barely be seen. It applies easily and bonds quickly. I can imagine this with so many projects, I need to prioritize them first.
by PJCC