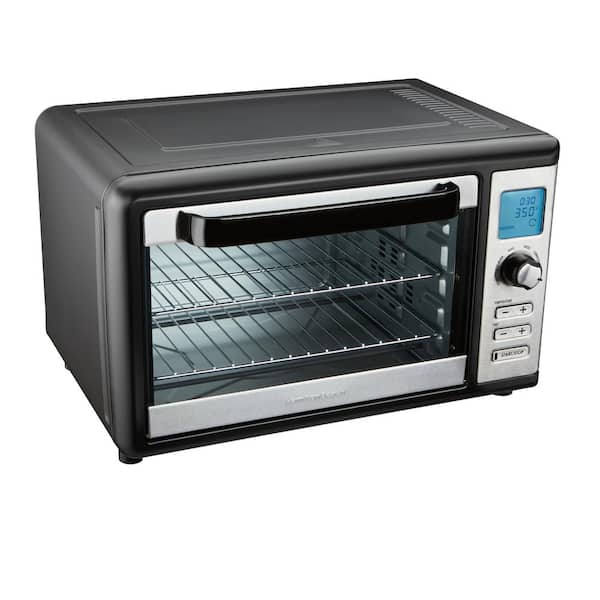 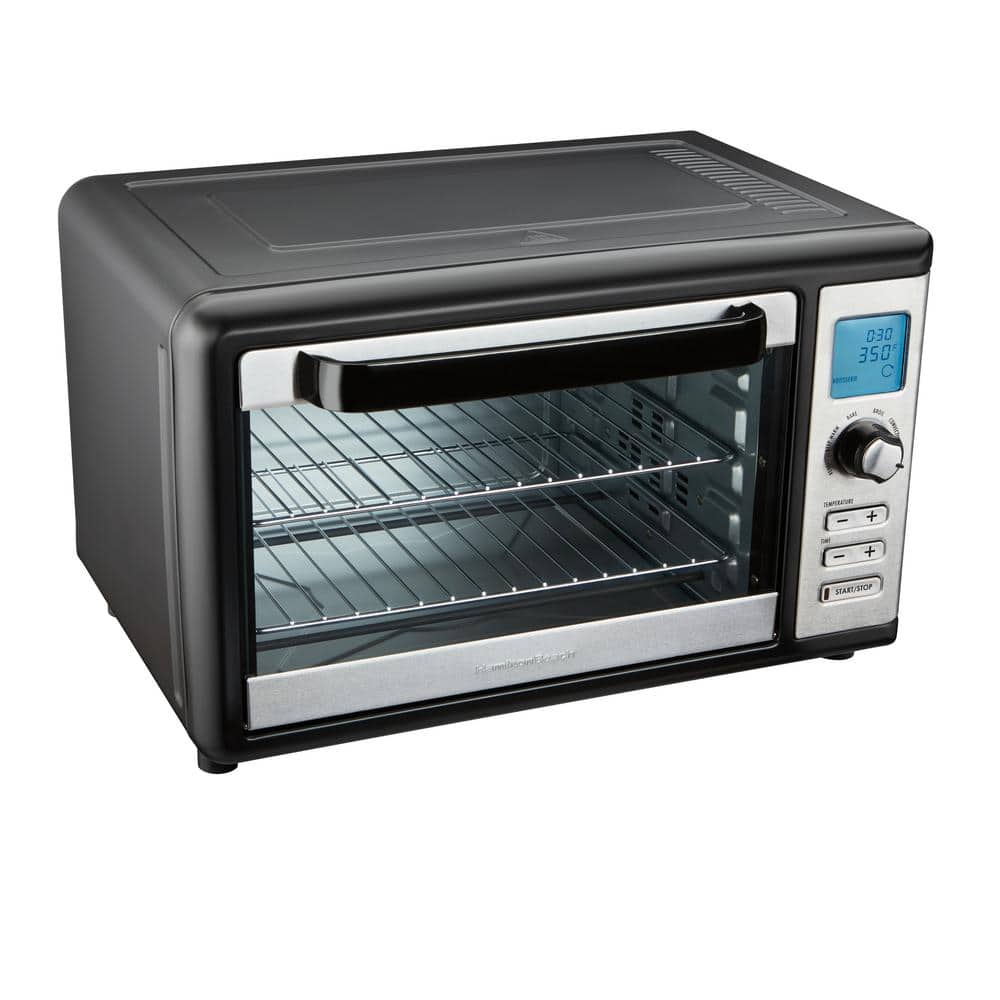 Designed with style and practicality in mind, the extra-large Hamilton Beach Digital Oven with Rotisserie is packed with all the space you need for cooking familly meals and desserts year round. Six digital cooking functions including convection, bake, broil, reheat, keep warm and rotisserie let you easily switch from baking casseroles or broiling salmon to preparing two 12" pizzas. The intuitive digital controls make it easy to select your cooking function, time and temperature and the LCD screen displays the current temperature and remaining cook time. Inside you'll find four rack positions so you can adjust the two included cooking racks as needed or remove them entirely for preparing a rotisserie meal and cleaning. Includes enameled bake pan/drip tray, rotisserie skewer and lifter and two cooking racks.

1
Filter by:
Showing 1-10 of 45 reviews
Mar 4, 2020
Bakes great!
[This review was collected as part of a promotion.] I am very pleased with the Hamilton Beach XL Digital Countertop Oven. In most cases, this oven could totally replace a standard oven. For a countertop appliance, it is large. So make sure you have a good space for it with enough room to give clearance around the back, sides, and top as they will get very hot. The front glass door will get extremely hot too. Do not touch the glass when cooking, only use the door handle. This oven has multiple settings - defrost, reheat, bake, broil, convection and rotisserie. I use the reheat, bake and convection the most. The digital display is clear and easy to read. The oven is simple to use. Turn the dial to select the setting like back, then press minus or plus button for temperature and time. There is even a "warm" option. I love the safety feature that the oven actually turns off completely once the timer goes off. I've cooked Chicago deep dish pizza, flautas, fries, chicken, etc. All have come out great. I do watch the time when using the convection option as that cooks faster. For baking unless I need to cook multiple items at once, the Hamilton Beach XL Digital Countertop Oven in my go to. Works great and I'm saving money not having to heat up a whole standard wall oven when cooking one dish. You can actually cook on two racks if they are not tall, like cookies or thin crust pizza. Perfect small kitchens.
by

Customer review from hamiltonbeach.com
Feb 16, 2020
Great features!!
[This review was collected as part of a promotion.] This oven is large enough to make an assortment of foods. But not heavy at all. It is very elegant looking and beautiful. You can reheat, warm, do convection, bake, broil and rotisserie!! You can’t beat that in one appliance. The knob turns very easily. There is a timer and a start stop button. There is also the temperature button. We love pizza and I made the one in the picture with the set time and temp it had on the box. It turned out perfect!! The outside of the oven gets pretty warm. But that is to be expected. After I was done it was so easy to clean up.
by

Customer review from hamiltonbeach.com
Feb 4, 2020
Perfect Oven
[This review was collected as part of a promotion.] I love this oven. I can bake, broil, make a rotisserie chicken with out my kitchen heating up like my stove does. This will be great in the summer! I have baked cookies, sweet breads, a roast and baked chicken! Everything came out perfect! It is easy to use and wipe up. It has a large capacity . I had 2 regular sized loaves and there was room to spare! It holds 2 pizzas! It comes with a drip pan and 2 racks! The style is great! Hamilton Beach products are always high quality. This company thinks of everything when designing products from ease of use to style to what consumers need.
by

Customer review from hamiltonbeach.com
Feb 3, 2020
This is a great oven!
[This review was collected as part of a promotion.] I love this digital counter top oven. It’s great for making pizza or roasting bread!!! It cooks evenly over everything! I love the keep warm option as well it great for keeping a dish warm while I cook other sides. I also love the Rotisserie option it cooks my chicken evenly and beautifully!!! You can pretty much do anything in this oven that you can do in a bigger one just on a smaller scale and you don’t have to heat up the whole kicthen to do it!! Plus it looks great on my countertop!
by

Customer review from hamiltonbeach.com
Feb 3, 2020
Beautiful design and works well!
[This review was collected as part of a promotion.] This countertop oven has been the perfect addition to my appliances. It has 6 different functions (reheat, keep warm, bake, broil, convection and even rotisserie!). You can easily change the function with the turn of the dial. There are two buttons below the dial that allow you to increase or decrease the time and temperature and a start/stop button below those. The digital face allows for easy display of the function and temperature being used. This is a very user friendly appliance.
by

Customer review from hamiltonbeach.com
Feb 2, 2020
I love it
[This review was collected as part of a promotion.] I decided to test this convention oven with something big. Figure go big or go home. I decided to do a rotisserie chicken. And omg it came out great. It was so simple to use. Turn the knob to rotisserie and change the temp and timer and you are all set. My only dislike is that the timing only goes up to 2hrs. The metal skewer gives the chicken a 360 turn. So every side gets evenly cooked. It also comes with a metal drip tray and a rotisserie holder to take out the skewer. I’m never going back to bake chicken in the oven anymore. This appliance made it so easy to get restaurant rotisserie chicken at your home. The oven also has two racks design to let you cook two things at the same time. This is going to be great when i have to make bagel pizza for the kids. I can cook a big portion. Its super easy to use. Move the knob to (bake,reheat, convention, rotisserie)and you are all set. Everything is easy to clean aswell. I highly recommend this to anything thinking of getting an oven. You won’t regret it. I already have shown this product to many of my family member and now they all want it. Everyone is loving how cook to perfection the chicken came out using this product.
by

Customer review from hamiltonbeach.com
Feb 1, 2020
Awesome!
[This review was collected as part of a promotion.] I got this oven because it’s just the two of us now at home. I am thrilled how much really do love it. I just have to learn how to use it better LOL it cooks faster than a regular oven! It doesn’t heat up my whole entire room. I love the design, it’s easy to understand, looks just like my big ovens. I love how it preheats and the timer won’t go until I push start again and it shuts off unlike my regular oven. I know I am really really going to enjoy this product.
by

Customer review from hamiltonbeach.com
Jan 31, 2020
Amazing Countertop Oven is HUGE!
[This review was collected as part of a promotion.] I was stunned by the size of this oven when I unboxed it; it's huge! It can actually rotisserie a whole chicken, which is perfect for our family, especially in the warmer weather. No heating up the entire kitchen, and overburdening the air conditioning! Anything after this is just icing on the cake, but it really does take the place of an oven. It will be a mainstay on our countertop, especially with its clean, elegant look, and user-friendly , ergonomically-correct dial, which is just another added feature. I really love this countertop oven from Hamilton Beach...they think of everything! If I could give it more than five stars, I would.
by

Customer review from hamiltonbeach.com
Jan 30, 2020
Cooks great
[This review was collected as part of a promotion.] I got this about 4 days ago and couldn't wait to try and cook a whole chicken.First time doing it.It came out to tender and juicy using this Hamilton Beach Hamilton Beach XL Digital Countertop Oven...
by

Get the same possibilities as a full sizeGet the same possibilities as a full size oven, with quality results, in a convenient countertop size. KitchenAid brand brings full-size oven expertise to this digital countertop oven that fits more than you think. It includes a 9 in. x 13 in. baking pan and has 50% more capacity than a leading competitor compared to Breville Mini Smart Oven BOV450XL. In addition, this digital countertop oven has 9 preset cooking functions + Frozen option, for everything from roasting, to broiling and baking. The easy to read digital display that gives you at-a-glance updates on cooking progress. And a non-stick interior makes for quick and easy clean every time.See Full Product Description

Small enough to fit on your kitchen counter,Small enough to fit on your kitchen counter, but large enough to help you prepare for any snack, meal or party, the Hamilton Beach Countertop Oven with Convection and Rotisserie boasts full-size oven performance in a compact, energy-efficient form. Designed with both kitchen style and practicality in mind, this oven is packed with versatile cooking options that range from baking cakes to broiling salmon to roasting an entire 5 lb. chicken. The wide interior and two adjustable cooking racks provide double the space for cooking multiple foods at once. Extra-Large Capacity There's plenty of room in this countertop oven for any meal. It fits two 12 pizzas, two 9 in. x 13 in. casseroles or two cake pans. Or fit an entire 5 lb. chicken using the revolving rotisserie. Convection and Rotisserie Take your roasting and baking results to the next level with two additional oven settings. The convection setting bakes faster and more evenly than traditional ovens. And the rotisserie revolves meat while cooking, which locks in flavor and juices and turns the outside brown and crispy. Accessories Included with your oven is everything you need to get baking, broiling and roasting right away. Including a removable drip tray, rotisserie skewer and lifter, 2 oven racks, 2 baking pans and a broiler rack.See Full Product Description

KitchenAid brand brings full-size oven expertiseKitchenAid brand brings full-size oven expertise to this dual convection countertop oven that fits more than you think. Save time and bake 2 whole chickens at a time. This countertop oven also features a built-in temperature probe for more control during the cooking process, for perfect cooking results time after time. In addition, it features 12 preset cooking functions, an easy to read digital display, an interior light to check progress at any time without disrupting your dish, and a non-stick interior for quick and easy clean every time. The Dual Convect Bake setting allows you to cook up to 20% faster - compared to Bake setting; 3 lb. chicken. Based on 3.6 lbs. weight.See Full Product Description