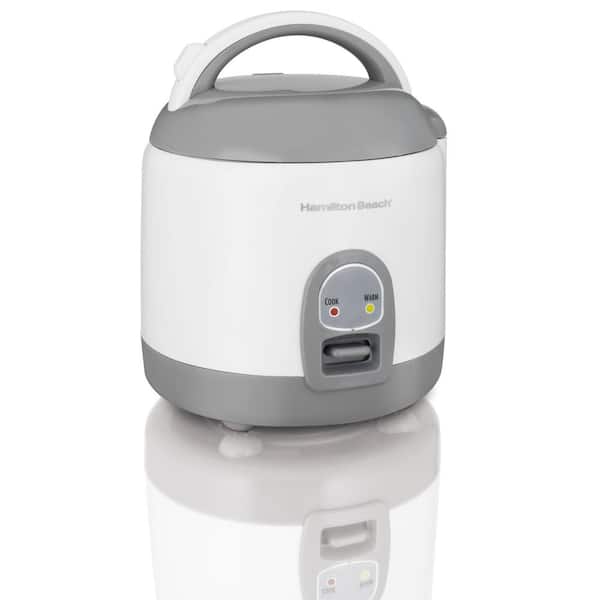 Make delicious, fluffy rice with minimal effort. Making rice and whole grains in the Hamilton Beach Rice Cooker is as easy as placing the ingredients in the bowl and turning it on. The rice will cook perfectly on its own, giving you time to prepare the rest of your meal. Theres no need to worry about boiling water, adjusting the temperature or even setting a timer - it will automatically shift to warm once the cook cycle is complete. With a 2-8 cup cooked rice capacity, you can cook a small side dish or enough for the whole family. Use the included 2-in-1 basket to rinse rice or grains ahead of cooking, or use it to steam everything from salmon to zucchini. Clean up is a snap with the dishwasher safe nonstick cooking bowl and rice rinser/steam basket. The lid liner can also be removed for quick cleaning. Its compact size makes for easy storage.

0
Filter by:
Showing 1-10 of 13 reviews
Mar 28, 2021
Rice made easy
[This review was collected as part of a promotion.] I chose this rice cooker because my teenage son eats rice with almost every meal. I thought maybe this would make it easy for him to make rice when I'm not around. I have to say that I'm glad I got this one. It's easy to follow instructions and easy set up made it a breeze to teach him. The cook time was so fast and the rice turned out perfect!
by

Customer review from hamiltonbeach.com
Apr 3, 2021
Foolproof!
[This review was collected as part of a promotion.] This has made it so easy to make rice perfect EVERYTIME! Not a single bad batch! It really is foolproof. I love that it will keep the rice warm throughout the day, it is still great hours later! Works awesome for a decent price. Not too big to keep on the cabinet also.
by

Customer review from hamiltonbeach.com
Apr 2, 2021
Makes good rice, but unfortunately leaks
[This review was collected as part of a promotion.] I first want to say that this makes really good rice. I've used it to make white rice and brown rice, and both turned out great. It is much easier and seems to have much more consistent results than making rice on the stove like I used to. It's pretty easy to clean too. Most of the parts that get dirty can be removed and are dishwasher safe, and the parts that can't be removed can be pretty easily wiped clean. The only part that concerns me is the condensation drain thing has very small holes which seem like they would get clogged. I've only used this twice so far though, so I don't know if clogging will ever happen. I just get nervous about it building up pressure if the vents get plugged. The big downside for me with this rice cooker is it leaks. It starts leaking out of the steam vent after it starts boiling and getting starchy, and the leaking lasts for a few minutes. The instructions say to empty the condensation collector as needed throughout cooking, which I assume is where the liquid is supposed to go, but almost all of it appears to come out the top steam hole. The first time I used the rice cooker no water whatsoever went into the condensation collector. The second time I used it a bit did, but quite a bit still leaked out. I don't know if this is from me doing something wrong or if it's just how it is, but I definitely recommend putting a towel around it or something. All in all, this is the first rice cooker I've ever had, and I really like it. The pros definitely outweigh the cons for me, and this will be what I use to cook rice from now on. I recommend this product for anyone who has trouble getting consistent results on the stove and who wants an easier way to make rice.
by

Customer review from hamiltonbeach.com
Apr 1, 2021
LOVE my Rice Cooker
[This review was collected as part of a promotion.] The rice was extremely moist and evenly heated. I liked that it automatically changed from cooking to keep warm. Also, not having to constantly stir or watch made cooking overall more enjoyable. Clean up was a breeze.
by

Customer review from hamiltonbeach.com
Apr 1, 2021
Perfect cooker
[This review was collected as part of a promotion.] Hamilton Beach Hamilton Beach 8 Cup Rice Cooker Is easy to use and cooks rice perfectly. So easy to clean as well. The family is completely amazed at the quick and easy to use Hamilton rice cooker. The style is very nice and the white color matches with everything in the kitchen.
by

Customer review from hamiltonbeach.com
Apr 1, 2021
Great Rice cooker. Faster than the other one I had....
Great Rice cooker. Faster than the other one I had. Comes with a steamer and rice spoon so you don't have to buy those separate.
by
Mar 28, 2021
Works great!
[This review was collected as part of a promotion.] I am making rice constantly for my family for many different meals. We use it for gumbo, red beand and rice, pot roast, and more more meals. I was so happy to use the Hamilton Beach 8 cup rice cooker. It makes much more rice that I could in the rice cooker that I used before. I just measure the amount that I would like to make, put the lid on, press the button and go! I come back when I hear the button switch to warm and I know that my rice is ready. It always come out soft, fluffy and perfect! Great product!
by

Customer review from hamiltonbeach.com
Mar 27, 2021
Perfect rice!
[This review was collected as part of a promotion.] So easy to use and my rice comes out absolutely perfect! I make rice often, and this rice cooker will make it easier than ever. Even my brown which I've had trouble cooking in the past comes out great!
by

The SPT 4-Cup Rice Cooker is easy to operateThe SPT 4-Cup Rice Cooker is easy to operate with the 1-button control. This cooker automatically turns on the warming function to keep rice warm for up to 5 hours. The cooker features a cool-touch exterior and a lock button for added safety. Cook and keep warm indicator lights alert you to the current mode and the air-tight lid helps to lock in moisture and flavor.View Full Product Description

The SPT 3-Cup Rice Cooker/Steamer is easyThe SPT 3-Cup Rice Cooker/Steamer is easy to operate with the 1-button control and energy efficient design. The steamer automatically turns on the warming function when cooking ends and allows you to cook rice, porridge, stews, soups, vegetables, fish, poultry and more. The steamer is ETL listed with automatic shut-off for added safety.View Full Product Description

Conquer a variety of culinary endeavors withConquer a variety of culinary endeavors with help from Panasonic's 1.5-cup mini rice cooker. Create light, fluffy, restaurant-quality rice perfect for side dishes or stir-fries. Make sticky rice for rolling sushi, Spanish rice for enchilada night, or hearty wild rice to add to a tossed green salad. You can also make creamy rice pudding with cinnamon sprinkled on top for dessert. The automatic cooking feature takes care of the rice at the touch of a switch to reduce overcooking so you can focus on getting the rest of the meal prepared and on the table. In addition, cleanup is quick and easy with the non-stick inner pan.View Full Product Description