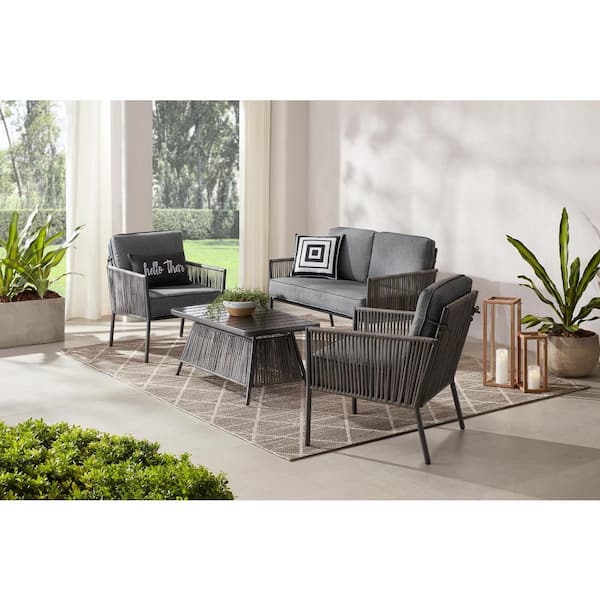 Enhance the style of your outdoor entertainment area with this 4-piece patio conversation set. Perfect for a comfortable chat or casual drinks, this set includes a coffee table, a loveseat and two lounge chairs with charcoal cushions. The cushions are made with weather-resistant fabric that retains its vivid color. A powder-coated steel frame ensures the set's durability and prevents unsightly scratching. These pieces are easy to assemble.

17
Filter by:
Showing 1-10 of 212 reviews
Jun 25, 2022
Nice set
We bought both the dining and lounge set in March. As other reviewers stated, the set is a pain to assemble. The holes do not line up, so it takes way more time to assemble than it should. However, if you can work through that, the set is beautiful once it's together. Also, the cushions are comfortable and easy to clean. I can't speak for the longevity of the sets since I've only had them for three months. But in the three months, we've had snow and a lot of rain. The cushions have dried quickly and without a weird/moldy smell. We added a navy blue umbrella to the dining table, and it looks great. We have gotten several compliments on both sets. A final note: When we bought both sets in March, we paid under $1200. They are now selling for over $1100 each. While I understand it's June and peak outdoor season, the sets are overpriced.
by
Jun 25, 2022
Looks good BAD quality
It arrived looking good and went together easy- but I noticed that raw steel edges were not sealed. Even storing these inside all winter these didn’t even last 1 full year. The metal is rusting under the paint becoming brittle and damaged. It’s going to look like trash in 1 year. DO NOT BUY
by
May 25, 2022
It looks just like the picture. Beautiful and I love it.
Its beautiful. Love it
by
Oct 23, 2021
Great value
Looks very contemporary with clean lines. 5 star looks....3 star assembly ease.
by
Aug 7, 2021
Difficult assembly but awesome after finishing.
The furniture looks awesome! I have a smaller deck but the furniture covers good space while still leaving me plenty of room. Assembly was tough. Allen Wrench needed a lot of fidgeting and the holes on each piece were almost never aligned. Had to muscle a few pieces in but when it came to the table setup, forcing the alignment wasnt an option. I had to drill my own hole to get the pieces aligned and secured. Despite the effort, i’m super happy and excited about the furniture!!!!
by
Jun 2, 2021
Looks great. Fits smaller spaces. Easy to assemble overall, had...
Looks great. Fits smaller spaces. Easy to assemble overall, had some difficulty lining up screw holes.
by
May 10, 2021
Difficult to Assemble
Haven’t really had a chance to use the set yet because I live in Newfoundland!!i like the set but was disappointed with the assembly. The holes on the loveseat did not line up with the bottom piece. Luckily, my husband was able to make the holes bigger with the tools we had on hand. If we didn’t have the tools available there is no way we would’ve been able to put it together.
by

Made with a durable metal frame with interwovenMade with a durable metal frame with interwoven rope seating, this 5-Piece Wicker Outdoor Conversation Set is the perfect addition to your patio decor. Each set features 4 chairs, with included cushions, and a single coffee table. Each piece is suitable for patios, poolsides, gardens and indoor use.View Full Product Description

Whether you are lounging solo or entertainingWhether you are lounging solo or entertaining a group, the Bradenton 4pc Conversation Set fits the bill. Each piece of the set features sturdy steel frames wrapped in beautiful all-weather wicker. The loveseat and armchairs are stylish and comfortable with gently arched arms and thick moisture-resistant cushions. A glass top coffee table ties the seating arrangement together, making outdoor entertaining a breeze with the Bradenton conversation set.View Full Product Description