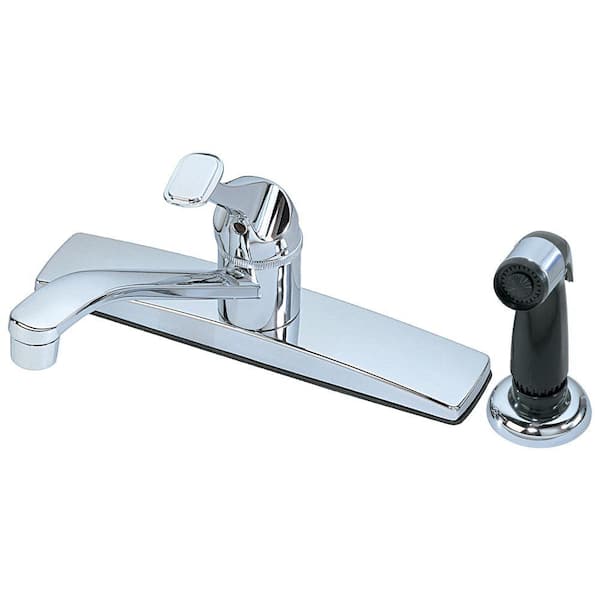 The simple design of the Homewerks Worldwide Single-Handle Side Sprayer Kitchen Faucet in Polished Chrome works well with many kitchen decors. It features a convenient side sprayer that allows you to reach every corner of your sink. The faucet's 1-handle design makes water control almost effortless.

What are the dimensions of the base?

Does this faucet swivel so it can be used on a double sink?

How many holes to mount this faucet?

I believe it's 1 for the actual faucet part & a second hole for the sprayer. Hope it helps!

0
Filter by:
Showing 1-3 of 3 reviews
Oct 1, 2019
The faucet was easy to install and it works good....
The faucet was easy to install and it works good.
by HomeDepotCustomer
Dec 11, 2015
Nice. Hope it lasts.
Our original kitchen faucet with this kind of handle began to leak & before long more water leaked than ran through the thing. After measuring & searching I came to the conclusion that this was the cheapest replacement I could find. I ordered & had it delivered to my local store. It arrived faster than estimated which was a major plus. Installation, however, was a pain in the neck though which is exactly why I subtracted a star. Although it was supposed to be a simple replacement, with the advice of a store employee, this kit didn't come with everything to make it a simple swap. Ultimately my Uncle had to bring his tools to finally get this thing connected. We've only had it installed for about a month. So far, no leaking. The sprayer also works well. The only "gripe" I have is with the handle. It's quite "loose". By this I mean, you can flip on the faucet with a half stregnth using your pinky finger and you would turn it on full blast. It's an adjustment but it's something we'll get used to. I also LOVE the fact that this faucet is set up where you can repair it should it begin to leak like our old one did. You can repair it without having to replace the entire thing which is a BIG plus.
by 11221992

1 person found this helpful
Mar 6, 2014
better quality
I wanted an inexpensive faucet for the garage. I purchased one from amazon and it came apart when I first ran water through it. This one was $5.00 more and much better quality.
by DEBACITA

Core Single-Handle Standard Kitchen Faucet with Side Sprayer in Chrome

The Delta Classic single-handle kitchen faucetThe Delta Classic single-handle kitchen faucet in chrome has clean styling and simple lines for a practical, elegant appearance. The chrome finish can create a bright, modern accent for almost any kitchen. This faucet has a single lever handle for ease of use. The solid brass construction helps ensure reliable, long-lasting use. This ADA-compliant faucet comes with supply lines for installation.See Full Product Description

Add a bright, reflective, cool gray metallicAdd a bright, reflective, cool gray metallic look to your kitchen's decor with the Delta Classic Single-Handle Kitchen Faucet in Chrome. The faucet features a single-handle lever design, and the handle has a red/blue indicator to indicate hot/cold water temperature. This faucet offers a mid-arc spout, an adjustable handle limit stop and a vandal-resistant aerator. The ADA-compliant faucet is designed for single-hole installation.See Full Product Description