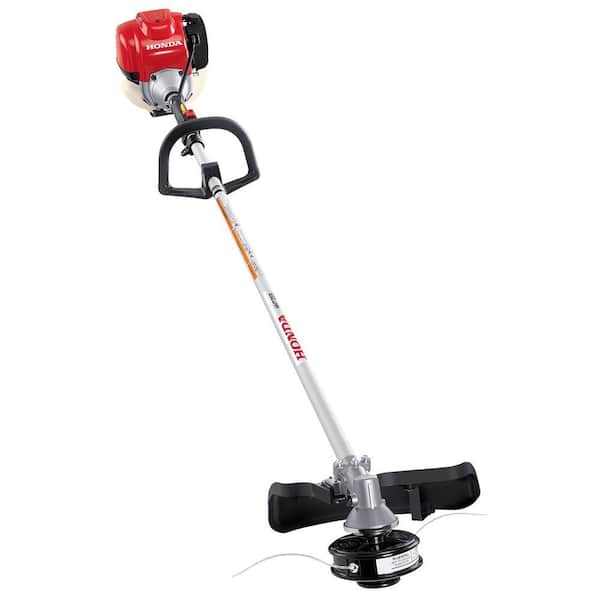 You won't find better power or performance than what you get from the Honda gas trimmer. The trimmers are highly fuel-efficient and use regular gas. That means there's no mixing of gas and oil.

I’m interested in this honda trimmer, but how much does it weight?

Don’t have a lbs for it. I use it without a shoulder strap for hours. If not weak, shouldn’t have a problem...

I am purchasing for trimming around our pond in the country- I see the steel brush trimmer heads ...

It is theoretically possible to add one but not recommended. It requires a must stronger steel guard and changes to the attachment point.

Can you edge with this trimmer ?

Yes you can. It works very well when edging. Just make sure when you turn it on its side, the air filter it up towards the sky. If not, it'll become flooded with gas and quit working on you.

Please pay careful attention to my question. I have read the owners manual about proper starting ...

This machine is made rather well and sturdy, and can absorb minor impacts without damage. However, any serious damage incurred if dropped can prevent the unit from starting or running. The level of damage would depend on many factors, such as from what height was it dropped, onto what type of surface, what area(s) of the device incurred damage, and other factors.

Does it come with a strap?

Yes it does very comfortable

Is this compatible with a bush cutter disk ?

Yes, you'll need to get the honda barrier kit which includes a left hand nut, stamped spacer and washer to make it all fit.

Can u put a brush blade on this product

What do I need to purchase to be able to put a brush cutting blade on?

What do I need to purchase to be able to use a brush cutting blade with this trimmer?

How well does the saw attachment work, what diameter brush can be cut?

Saw attachment works great. I bought the barrier kit, which comes with the proper left hand nut and spacers to make it fit. With a carbide tipped blade I cut 2" privet and saplings with no problem.

70 people found this helpful
May 5, 2013
Great performance!
The Honda 4 stroke starts so easily and is so quiet I don't need earplugs anymore. The strap is comfortable and makes it easy to maneuver. Just pour gasoline in it and you are good to go, no more mixing it with oil. Overall it's a great value for the price.
by Ili2013

43 people found this helpful
Nov 6, 2012
Its quiet and feels like it will last and last
No more mixing oil for me! Happy to just keep one can of fuel. I started using the cruise control button that holds the gas on at a quiet but perfect RPM for trimming. Its at higher price point but I hope to keep it for a long time.
by Phil

You won't find better power or performanceYou won't find better power or performance than what you get from the Honda HHT35SUKAT gas trimmer. Honda trimmers are highly fuel-efficient and use regular gas for the 4-Cycle engine. This means there's no mixing of gas and oil. One gas can for all your engine driven products in the garage. The HHT35SUKAT come with handle bar grip which helps you to get even the toughest jobs done with no difficulty.See Full Product Description