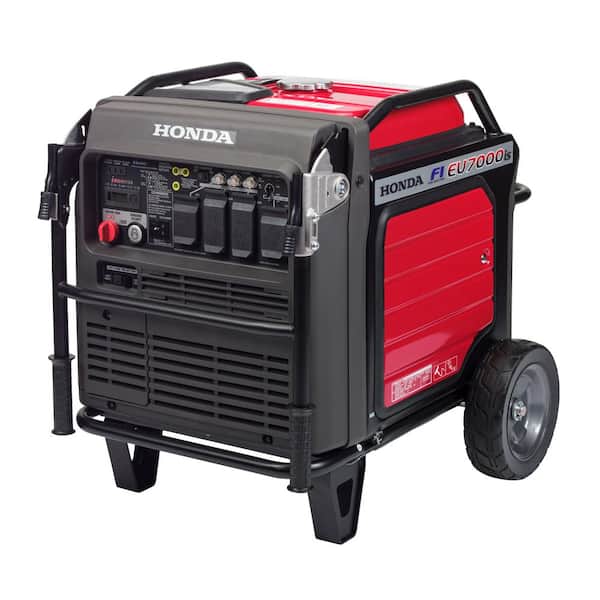 Perfect for home back up power, RVs, outdoor events and more, the EU7000iS can operate a wide variety of 120-Volt and 240-Volt applications. This includes furnace fans, well pumps, sump pumps, refrigerators, freezers, dual RV air conditioners and event food trucks. It is perfect for portable use at home, camping, events and much more.

3
Filter by:
Showing 1-10 of 160 reviews
May 24, 2021
2143 Hours and Counting
We purchased the Inverter Fuel Injected EU7000 back in August of 2016. Currently running 2143 hours. I change plugs, air filter and especially oil filter at recommended intervals. Our previous experience was with a 3100 yellow colored inverter generator that in theory, should have handled our camper but would bog down constantly with A/C running and anything else. We are extremely pleased with the Honda EU7000iS. I believe the fuel injection feature makes ALL the difference in performance and reliability. Occasionally, during the 90 plus degrees of the summer we will give it a brief break, otherwise it is a BEAST and I mean that in a good way. It's not unusual for us to set up camp and run this for 5 or 6 days straight. I would suggest that Honda consider something in the 10-15,000 watt range inverter as an alternative to the noisy expensive whole home backup generator.... JMO.
by

Customer review from Honda Power Equipment
Jan 9, 2021
I bought the BEST GENERATOR
I certainly did my homework on this particular unit! I need a whole house gasoline generator. I live in a HOA. They wouldn’t let me install a 1000 gallon propane tank. Diesel would have been way more expensive & natural gas is not available where I live. I needed an inverter for clean 60 cycle power. The fuel injection is super nice as I have set up an after market auxiliary fuel tank to extend my run time to 28 hours at 1/2 load. I needed it to run my central air. I have a 2-1/2 ton unit. I added an after market “hard start capacitor”. Now it will run that & the rest of my 1700 sqft house. We do have oil for heat & on demand hot water. As well as a propane stove & dryer. I bought a hard wired remote so my wife never needs to go outside to start it. I had a local fabricator pour a concrete pan & build a 306 stainless steel enclosure vented on two whole sides. It had a hinged top & has a heavy duty Abus lock on it. When the lights go out? I’m usually at work already as I’m a lineman for the local power company. My wife can flip a few switches in the basement & bring the generator online & pick up the entire house (except the central air because of cold load pick up).
by

Customer review from Honda Power Equipment
Aug 6, 2020
Excellent As A Backup
My wife and I moved to the area near the beach and have never had to think about power outages until now. We've been living in the area now for two year and the first year we moved in it was several weeks before Hurricane Florence hit. We lost power for seven (7) days and that’s when we knew we needed a generator. We want to get a whole house standby generator but wanted to first try a generator out prior to investing a large sum and getting disappointed. We did our research and went with a portable generator. After some exhaustive research we landed on the Honda EU7000is because, according to everything we reviewed it would give us the power we needed to power our home. In this case we could see how well a generator could handle the load. We recently purchased the generator right before Isaias hit. To my delight, we were very pleased with the generator. Because we had never owned or operated a generator, we were concerned that it would be too difficult for us to operate, but this generator dispelled all of our fears. It was easy to connect, start and operate. It monitors all aspects of the function of the system. The meters are easy to read and determine what is happening with the system. It ran flawlessly. We ran all of the appliances we needed, including an air conditioner, on the system and only used a little less than 1/3 of a tank of gas which gave us a little over six (6) hours of electricity by the time the electricity was restored. The system didn’t strain and ran quietly. Our neighbors commented that they didn’t realized that we were running a generator because they couldn’t hear it run. This is a great generator.
by

Customer review from Honda Power Equipment
Oct 14, 2021
I don't know if I can trust it to work when I need
I bought this new 7000is generator instead of the EM6500s that I went in for. My 24 year old EB6500s was suddenly having an issue delivering the usual 120v that it had been delivering when I needed it to. Due to the age of my older unit, I decided to buy a new one and repair the old one for spare. I looked at the 7000is when I went in and studied the features vs. the older, more seasoned 6500s. So, I bought it. The reputable dealer said that it was set-up and load tested and ready to go. When I got it home, I started it up twice and checked the voltage output and was delighted that it delivered 126v/253v at no load! That was great. A week later, we had another outage and I went to use the new 7000is, but was surprised and then frustrated that even though it started up right away, it suddenly stopped running while I was letting it warm up. It re-started easily and did not repeat the stoppage. Then, to my surprise, after it warmed up and I checked the voltage output, it produce none! NONE! It did not matter which switch combination I selected either. It produced no output from any receptacle.. I tried once, twice and a third time, but no output. My son, with the manual in his hand, also tried every combination, just to ensure that I wasn't missing something, but still no output. So, with great frustration, I got the old 6500s out and as it warmed up, the voltage stabilized to 115 to 118v and I used it to power the house. After running the 6500s for through two tanks of fuel, I decided to just try the new one and to my surprise, it started, warmed up and produced the correct voltage from the appropriate outlet/switch positions. I used it for the next twelve hours or so and it ran fine and continued to produce the correct voltage. The only thing wrong? It doesn't register any load readings on the display, no matter how high or low they are. The good news is that the 7000is "sips" fuel compared to the 6500s, just as Honda promised. So, can I trust the new 7000is to protect my home from freeze-up, or lost food, or no water from the well, or lights, during the next outage, of which we have many? I bought a set of replacement brushes for the 6500s and will have that back ready just-in-case.
by

Customer review from Honda Power Equipment
Oct 3, 2021
Almost Perfect
The features are top notch. The packaging is tremendous. Reliability and noise level appear to be best in class. The inverter function for clean power is a MUST HAVE with modern electronics. Being able to control the generator with an app is truly 21st century. To make it perfect I would: 1) Make it 7000 watts nominal and 10000 watts peaking for the price point 2) Include a supply of oil drain plug crush gaskets with the original purchase 3) Include a magnetic oil drain plug 4) Have the gas tank opening off to the side instead of dead center 5) Update documentation to state when used as whole house power, do not enable eco mode 6) Locking instructions to prevent theft 7) (optional) Offer a propane conversion kit
by

Customer review from Honda Power Equipment
Aug 11, 2021
Great generator for mobile LED sign
This generator is used to power a double sided 4'X8' mobile LED sign if is very quiet and uses about .33 gallons of fuel per hour running 12 to 15 hours per day. Very satisfied
by

Customer review from Honda Power Equipment
Jun 18, 2021
Great home backup generator
I have owned a previous Honda 6500 generator and loved it. Starts every time and has been used as backup house power and runs welders and other power equipment around our place. So quiet, it is very nice to power travel trailers.
by

Customer review from Honda Power Equipment
Jun 7, 2021
We use our generator for a fifth wheel camper.
Love this generator. We have 2 air conditioners on our fifth wheel camper. Runs them both plus any appliance we use in side. It is so quiet. Can run it all day and night in a camp ground with no one complaining that it is loud. Wonderful product!
by

So quiet, your neighbors will thank you.So quiet, your neighbors will thank you. Honda's EU3000is is ultra quiet with the legendary reliability you have come to expect with Honda. With advanced inverter technology you can feel confident that the 3000-Watt of power produced by this generator is as reliable as the power you get from the outlets in your own home. The eu3000is can power a wide variety of applications, making it a popular pick for camping, RVs and multiple uses at home. Exceptionally efficient, it can run up to 20-hours on a single tank of fuel. You can rest easy, knowing your EU3000is is covered from top to bottom for 3 full years.See Full Product Description