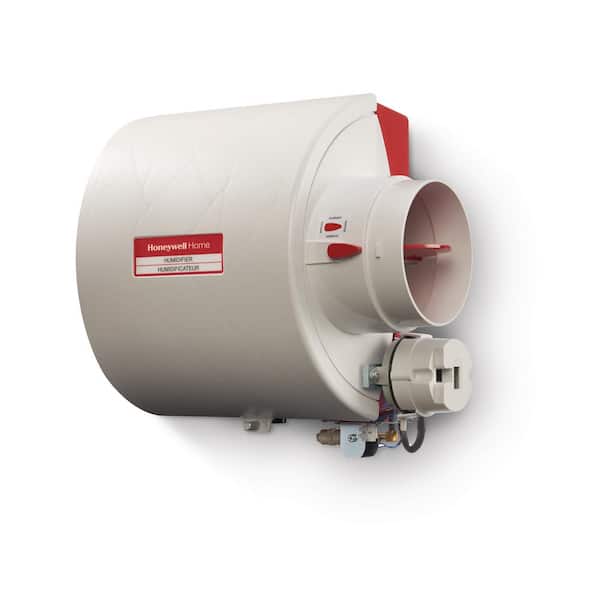 The Honeywell Home HE240 Flow-Through Bypass Whole House Humidifier works with your home's heating and cooling system to maintain a proper, comfortable humidity level throughout the home. Besides protecting your woodwork and furniture from drying and cracking. The humidifier can reduce the incidence of static electricity, promoting a safer home environment.

20
Filter by:
Showing 1-10 of 47 reviews
Feb 24, 2018
If Done Right
I recommend this unit as a diy only if you have experience or you have the time to research the correct install procedure. Do not use saddle valve instead purchase an actual water valve like i installed. Also use a starting collar on either return or supply as needed for your application. I bought a cheap humidity monitor and placed it on my return grill to get an accurate reading on where my humidistat is actually set to as it is difficult to get a constant cut in/out. If done right it works well.
by
1 person found this helpful
Feb 13, 2018
purchased to replace a very old Aprilaire 550 unit. footprint...
purchased to replace a very old Aprilaire 550 unit. footprint is a match and i didnt have to cut a massive hole in my furnace, which was nice. just follow the directions for wiring, took less than four hours and only the one trip to the depot. so 100 percent success.
by
Jan 16, 2017
Do not buy this humidifier. In fact, I wouldn't even buy any Honeywell products. Their customer...
Do not buy this humidifier. In fact, I wouldn't even buy any Honeywell products. Their customer service is atrocious. I purchased one, discovered parts were missing, returned it to the store to find all the others were missing parts but took one home anyway. I then ran around town buying replacement parts. Only when I set to work did I find that the missing parts were hidden within the humidifier itself; wish they would have mentioned that. So I cut a slew of holes in my ductwork, install this second one only to have the solenoid not function after four hours of work. I had to remove the entire thing and exchange it for another one at the store. After installing the third one, the solenoid did work but it would not stay open to let the water through. Honeywell agreed to pay for an HVAC contractor to come take a look. When the contractor arrived he first told me it should not be attached to the supply duct, which is where the directions tell you to install it. He then said the pressure switch (which is supposed to detect moving air then activate the solenoid allowing water to move through) would never work in any scenario. He said the bypass system is poorly designed and in fact, the whole system is poorly designed. Great. He ended up having to rewire the pressure switch to bypass it and wire the humidifier to the furnace. The more I studied the humidifier while the guy was there, the more I realized how poorly designed it is, how it would never work properly and do the job it's intended to do. But does it work? Does it provide humidity? Nope, not really. In fact, it has made no difference at all. Not satisfied, I contacted Honeywell again who gave me the run around for two more weeks before I finally spoke to someone who essentially blamed me for being smart enough to install one but too dumb to find all the information I needed. He said this humidifier is only expected to create 20-28% humidity at best. Why bother? That's what my house is at anyway. I asked him where that information was as I would have liked to have known that beforehand; he stated we don't like to flood customers with too much information or they won't buy the product and take the risk. He blamed me, blamed the store employees, the weather, my furnace might not be the right type, every other variable in the book except his own product. Easy excuse for them -- it's everything else but our product. In the end, the only way to resolve this is either keep the thing, let it drain out and waste a ton of water and do nothing or return it and turn my ductwork into the Bride of Frankenstein by patching a million holes with bits of sheet metal. Did he offer anything? Nope, just a lame apology.
by
Response from Honeywell SupportJan 25, 2017
Hi Becky, We appreciate you sharing your experience with the Honeywell Flow-Through Bypass Humidifier. We’ve been speaking with you via Twitter and we believe we’ve resolved this for you. Feel free to reach out to us again if you need any further assistance. Thank you!

2 people found this helpful
Dec 4, 2012
Great humidifier, good value - preparation & patience are key
So far I'm really pleased with the very noticeable over-night increase in humidity ~20% --> ~40%+. I decided to go with this model based on size,price, & features. Install overall took me about 6 hours. Most of that time was watching videos, reviewing instructions & planning! Remember (Measure x 3) = (Cut 1). Get familiar with tin snips! Wiring was easier since I could tap 24V side of furnace control board (R + C) - didn't need to run another 120V line nor use the included trans. Adjust water valve down to minimize excess. I added a 5-year ice-maker type filter on to mitigate sediment build-up. Seal her up good & get ready to breathe easy!!
by
25 people found this helpful
Dec 4, 2021
Broken after 1 year!
Solenoid not working. Water never comes out. After little blowing the tube solenoid clicks and it works. And again.
by
Response from Resideo TeamDec 6, 2021
Hi, we're sorry to hear your having troubles with your unit, please feel free to contact us to troubleshoot this issue at 1-800-468-1502, you can also find us on Facebook and Twitter under Honeywell Homes. -Joey

Mar 6, 2021
Rating provided by a verified purchaser...
Rating provided by a verified purchaser
by
Feb 17, 2021
by
Feb 16, 2021
Works like it's supposed to
Humidifier works great, I've had no issues. Installation was easy although time consuming mostly due to furnace location. It is recommended to install the unit on the supply side but I had to install on return side again due Honeywell's site to determine which pad assembly is required. The reason I didn't rate it a 5 is the instructions are for two models, HE240 and HE280 and the unit doesn't say which model I got. The replacement pads are different for each model.
by

Customer review from resideo.com
Feb 8, 2021
SOLENOID!!!!!!!!!!!!
It seemed like a good idea when it was installed on my new furnace. Two months of use and then heard the sound water gushing in my basement where my furnace is located. Water is gushing through the drain hose and overflowing on the floor. Not a good quality product. Contractor didn't think flow control was a feature of the humidifier. I had to reduce the water flow manually to a trickle. I now realize that I had a crappy contractor and a crappy product. Double whammy!!!! I do not know any better so I will just get a new one installed and get another 30ft. guarantee.
by

Create a healthier environment and IncreaseCreate a healthier environment and Increase the comfort of your entire home by installing the 12HF whole house furnace-mounted flow through humidifier. Having the proper amount of humidity in your home can help reduce respiratory infections, control static electricity, prevent house plants from wilting, and stop wood from drying out and cracking. You may also save money on your utility bill, as you can lower your thermostat and feel just as comfortable since humidified air feels warmer.See Full Product Description