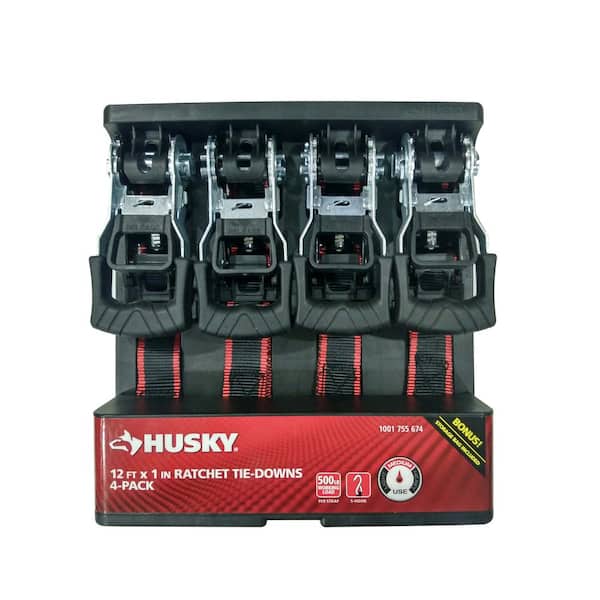 Husky 12 ft. Ratchet Tie-Downs (4-pack) are ideal for securing heavy loads with a break strength of 1500 lbs. for effective use. The tie-downs are weather resistant and UV-protected for durability. Non-marring, vinyl-coated S-hooks stand up to rigorous extremes and won't tarnish your equipment. Use these adjustable fastening straps to secure heavy items on a truck, trailer or roof rack.

42
Filter by:
Showing 1-10 of 2,164 reviews
Apr 17, 2021
awful to open
I overall think these straps are super sturdy, however you are not going to get into the packaging in a rush. they do require a Philips head to open... which is beyond stupid l.
by
2 people found this helpful
Mar 31, 2021
Used these to keep our trampoline from flying away at...
Used these to keep our trampoline from flying away at our windy house. Worked wonders during the past 3 storms so far.
by
1 person found this helpful
Mar 23, 2021
Length was exactly what I've been looking for!
Goodness, so many of the recent reviews (without pictures) have no real or helpful information. Wish there was a button for "Not Helpful". All straps advertise the length of the long (non-ratchet) strap side. And I've been hunting for a strap that had a longer strap on the ratchet side to wrap around the vehicle's raised roof rails (running boards). As pictured I've previously used a similar 1 inch red strap, but the length wasn't long enough to wrap around the roof rack's running boards. (The running boards/roof rack doesn't have a place for the S-hook to anchor into on it's own, so I wrap the strap around the raised running boards and use the S-hook to anchor on it's own strap. The added length of these straps on the ratchet side is exactly what I needed to accomplish the ability to wrap that side around the raised roof rail and hook it to itself. Some may think I'm crazy but yes, as pictured that are 6 kayaks on top of our Sienna mini-van. We love the roof rack and our many family adventures! Straps have been great! Additionally a recent reviewer on Feb.10, 2021 mentioned a strap simply holding down cargo in a trailer had broke. And that the other half was wrapped around the trailer's axel. These straps don't just break. And the fact the other end was wrapped around the trailer axel would indicate the excess slack wasn't properly tied off. But hung down and got ran over by the trailer wheel creating the tension that caused the strap to break and wrap itself around the axel.
by
2 people found this helpful
Feb 10, 2021
Bad experience/Breakage
I purchased a set of 4 Husky Ratchet Straps on February 1, 2021 from Home Depot in Las Vegas. Since I had already purchased 12 of the non-ratchet straps the day before, we did not use all 4 of the ratchet straps that day. The others were placed in the sinch bag that was included in the package. The straps were used that same day due to moving household items from Las Vegas to San Diego. Everything was fine. The next time they were used was on February 6, 2021 for the same reason. While driving to San Diego my boyfriend noticed that one of the book shelves had come loose. We immediately pulled over and noticed that one of the straps broke. Half of the strap was still attached but the other was not. After inspecting the rest of the straps, we noticed that the one holding down the smoker was beginning to tear. Luckily, the other half of the strap that was broken was found wrapped around the trailer's axel. While in stand still traffic, a fellow driver let us know it was underneath the trailer. We are extremely lucky that the strap/hook did not fly into a car that was driving behind. I am not sure why these particular straps did not work because the non-ratchet straps worked perfectly.
by
3 people found this helpful
Feb 5, 2021
Poor Quality - Stitching Failed
Bought these to use to transport a 350 lb motorcycle on a carrier. Strap failed in first 20 miles of trip. The stitching where the webbing is attached to itself to loop thru the ratchet let go and unraveled. Fortunately I had used four straps (2 front and 2 rear) so I was able to stop before the bike or anything else was damaged. I immediately replaced the straps. If you have these straps, check the stitching... I won't be using inexpensive straps in the future.
by
3 people found this helpful
Dec 5, 2020
Help support cargo net on top of ninja course....
Help support cargo net on top of ninja course.
by
Jul 9, 2020
decent straps
I have been using these straps for the past 4 years. They are decent straps for the money but they could be a little better quality. The straps are made of a slippery material and tend to slide across cargo frequently. The straps are also frayed after normal use because of how thin they are. They have not met my expectations even with a 4 star review. I wouldn't buy them again.
by
2 people found this helpful
Jun 24, 2020
It works ok
I bought these to anchor down my outside central air conditioning unit. I drilled & embedded concrete anchors into the concrete slab in a total of 8 places around the AC unit's 4 sides. I screwed 3/8 inch thick eye bolts into these 8 anchors. When a hurricane threatens I will attach both ends of the 4 ratchet tie-downs into the 8 eye bolts. Should prevent a tip over. My only objection is the packaging. It seems like (in addition to the supplied pouch) it could be used to store the ratchet tie-downs very neatly. HOWEVER, it is a brain teaser to try to figure out how to take out the tie-downs without breaking the plastic packaging. What kind of unreasonable person designed such packaging and why drive up the cost of the product unnecessarily? At least give instructions as to how to save the package from damage!
by
4 people found this helpful
Sep 3, 2019
Well put together....strong.....I'm glad I found these....to find out these are priced the same a...
Well put together....strong.....I'm glad I found these....to find out these are priced the same as the cheaper made items......I'm very happy
by
1 person found this helpful
Apr 2, 2019
Used this to strap 20 chairs to a cart. Worked great
Used this to strap 20 chairs to a cart. Worked great
by
Showing 1-10 of 2,164 reviews

The Keeper 12 ft. Desert Camo Ratchet Tie-DownThe Keeper 12 ft. Desert Camo Ratchet Tie-Down features a durable 1 in. nylon webbing to absorb shock and to resist rot and abrasion. The operation is simple and straightforward. The ratchet buckle is designed with a rotating gear and lever mechanism latch to tighten and secure your load. To engage, thread the webbing through the center slot of the rotating spool, then pull through to desired tension leaving a bit of slack and lastly, rachet by raising and lowering the handle. The webbing then locks into place to secure your cargo.See Full Product Description

These 1.5 in. x 16 ft., heavy-duty and weather-resistantThese 1.5 in. x 16 ft., heavy-duty and weather-resistant premium ratchet straps feature an ergonomically-designed handle with angular grip and durable ratcheting component to easily and safely secure cargo and keep loads from shifting. Safely secures loads to your car roof like a canoe or kayak or smaller items in the back of the car. Great for securing a motorcycle, medium-sized industrial UTV, small tractor or machinery or agricultural equipment in a truck bed or trailer.See Full Product Description