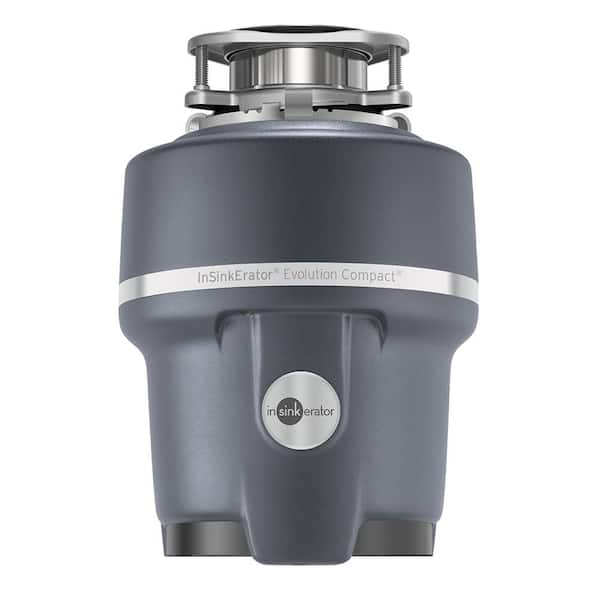 The InSinkErator Evolution Compact 3/4 HP Continuous Feed Garbage Disposal is perfect for small households and houses with restricted cabinet space. It has a 34.6 oz. grind chamber with stainless steel grind components and features MultiGrind technology that allows it to break down hard-to-grind items. It also features our SoundSeal technology, which delivers quiet performance versus a standard disposer.This model features InSinkErator exclusive Lift & Latch installation technology allowing for quicker sink connection. it is our easiest install ever.

75
Filter by:
Showing 1-10 of 8,705 reviews
Nov 2, 2021
Replacement InSinkErator
I replaced the same unit from 14 years ago. It was guaranteed for 10 years. These are built to last. I reused the mount and power cord so the installation was easy.
by
Oct 31, 2021
Best Buy for the money!
We looked at several other ISE models before settling on the Evolution Compact disposal. We are amazed at how quiet it is! Plus it is 3/4 HP which is a bit more than our old model 60 ISE, which lasted for 16 years. We like the fact that the rubber baffle can be removed for cleaning plus it is designed for maximum noise suppression. I did the installation myself which wasn’t too bad for a 71 year old. It doesn’t take up too much space under the sink either. We appreciate the quality of ISE products and wouldn’t have any other brand.
by

Customer review from insinkerator.com
Jun 4, 2021
I only found that there was a comercial version later!
I purchased this waste disposer to finally "gift" myself after having replaced several units over the years. I've been here for over 35 years and it was time for a treat, so I sprung for the best I could find on-line. So far it is the quietest unit I have ever had. And talk about thorough, I am so pleased that I got it. I had it installed and the installer said I made I good choice. Here's to the hope that it lasts for years to come!
by

Customer review from insinkerator.com
May 3, 2021
No issues so far
This unit is so quiet you can't even tell if it is running. The plumber had no issues installing. He said it is one of the best garbage disposal out there. The only issue - it is very large under the sink. Will only be able to store a few soap, dishwasher detergent, and spray cleaners because the unit takes up a lot of space. (See Picture) But I can deal with it.
by

Customer review from insinkerator.com
Apr 11, 2021
Excellent quiet grinding operation so far with one potential problem.
The potential problem is a violent shaking as the disposer comes up to speed when operated with the sink full of water. We have a rather substantial Kohler stainless steel double sink. The sink itself goes into resonance with the cavitation making a lot of audible noise. I am a physicist and have examined it. I believe it is caused by cavitation of the the water column. The motor is so powerful it will cavitate when turned on when the sink is full of water. The other disposers we have had were not powerful enough to cause cavitation. We are careful to not turn it on until most of the water has drained out of the sink. I don't know how serious the shaking would get if it were accidently turned on with the sink full of water and allowed to run until the sink emptied. It might cause damage to the disposer mount or even shake off of the mounting.
by

Customer review from insinkerator.com
Apr 5, 2021
Quiet and quick
I had a Badger which was very loud and took a long time to chop organic waste. It was still working, but I wanted something more efficient and quieter. The Insinkerator Evolution Compact was exactly what I wanted. Not only does it completely chop in 1/2 the time the Badger did, it is the most quiet Insinkerator I’ve ever owned. It was super easy for my husband to install with just a couple simple tools. Didnt’ have to cut or bend any pipes or hoses from the old unit.
by

Customer review from insinkerator.com
Feb 2, 2021
Some issues; better than options
Issues--they have color-coded wires in the unit but give you a black plug-in cord that doesn't differentiate between hot and neutral. Even the 1/2 hp I replaced had color-coded wires for the plug-in, but it was not as heavy as a wire. Google told me which the wide blade on the plug end was; hot or neutral; same for the white wire in the unit. I was surprised this was noisier than our old 1/2 hp Ace unit was before it started failing. Probably because it has a 3/4 hp motor. It did seem to quiet down after some use though, and now is not objectionable and no noisier than old 1/2 hp was when new I don't think. Bottom line is that I wanted stainless steel components rather than galvanized parts like the old unit had. Since the old galvanized 1/2 hp unit worked for 10 years +/-, we hope this one will last 20 years. It's surprising that the warranty reports are so negative though for the few that have had problems. Seems like the warranty response isn't real great. In conclusion I'm glad we got this despite the issues above. The wire coloring was resolvable, the noise is not really an issue, and this is my best step toward not having to replace this unit so quickly; hopefully for 20 years.
by

Customer review from insinkerator.com
Jan 1, 2021
Quality product
This was my first time installing a waste disposal so I was kinda nervous. But after I got setup things went smooth & the product is quite & looks real sleek.
by

Customer review from insinkerator.com
Dec 21, 2020
Quiet and Powerful!
We replaced our twenty year old food disposer with this one. WOW! What a difference. Not only was it very easy to install, but it functions wonderfully and is so quiet that you don't even know its on, if the water is running. What a great improvement over our previous model.
by

Customer review from insinkerator.com
Dec 13, 2020
Well worth the extra cost! This is a luxury model!
This 1HP Excel disposer is clearly an upgrade from the 1/2HP Evolution Compact that lasted 14 years! This unit is quieter and we are very satisfied with it's performance! It's heavy, highly recommend having it professionally installed.
by