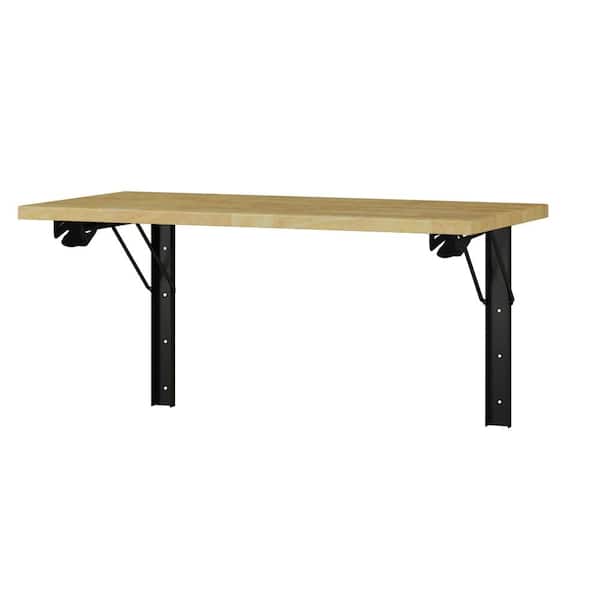 Create the right amount of workspace with this industrial folding workbench. You can adjust the height to suit your needs. The convenient folding mechanism allows you to assemble and store the bench quickly. A solid rubber wood top, black powder-coated steel frame and 500-lb. weight capacity make it built to last.

Elevate your work experience with the HuskyElevate your work experience with the Husky 52 in. Adjustable-Height Work Table. This multi-functional work station features a manual crank that can raise and lower the work surface. The 1.2 in. thick, solid wood top is rugged and beautiful and there is plenty of space on the 52 in. W x 24 in. D work surface. The workbench can be assembled with either the four, 3 in. x 2 in. polypropylene casters for mobility or attach the 4 leveling feet for use as a stationary table or desk. This work table has plenty of uses around the home, office, hobby room or garage. It is designed with a 300 lb. load capacity and an overhang so that you can easily attach your vise grips or cl-Amps while working on a project. This 52 in. Husky Work Table's contemporary, adjustable-height feature allows you to have the flexibility to sit or stand while working. Research suggests that there are health benefits to alternating between standing and sitting throughout the day because it both decreases body discomfort and increases blood flow. The ergonomic design could also reduce eye and back strain and boost your productivity. The crossbar support can be installed in 2 different locations, depending on your preference. Install the support at the center of the table for an open, 2-sided work area. Or install it along the back of the legs to allow you the versatility of stowing your tool storage and rolling cabinets underneath to further organize your work space.View Full Product Description

The Husky 6 ft. Workbench is an excellentThe Husky 6 ft. Workbench is an excellent way to expand your workspace. It features a 0.8 in. solid wood work top measuring 72 in. W x 24 in. D. It supports up to 1000 lbs. of distributed weight and has adjustable feet for stability on uneven floors. It coordinates nicely with the Husky 28 in. 1-Drawer 2-Door Base Cabinet and Husky 28 in. 2-Door Base Cabinet to give your garage, workshop or basement a cohesive look.View Full Product Description

With its space saving design perfect forWith its space saving design perfect for inserting 2 fortress cabinets, the Fortress Garage Table, features a steel frame and base for added durability and unique design. A melamine finish keeps the piece from tarnishing and allows for easy cleaning. A highly functional unit, this table belongs in any garage and is built to last for generations. Available in grey.View Full Product Description