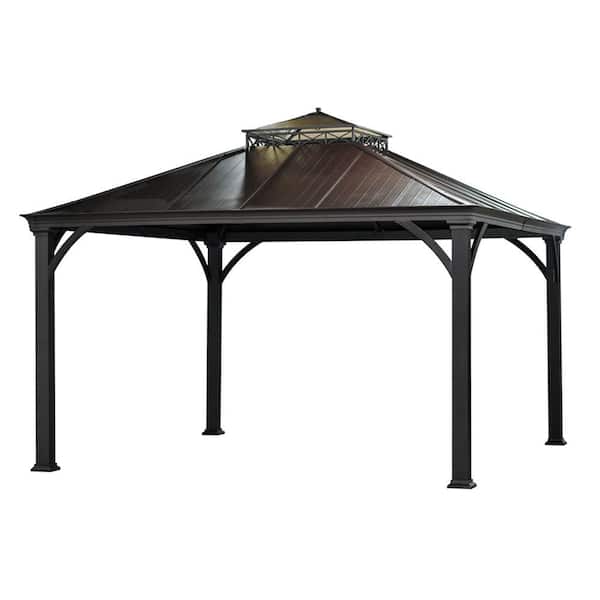 Transform your yard from bland to beautiful with the addition of this hardtop gazebo. Take shelter from the hot summer sun or extend your time outdoors with shelter from the fall rain underneath this alluring edifice. Its large frame is big enough to comfortably set up an ideal dining area or lounging zone for the whole family.

what is the size of the posts

Is this a metal roof

Yes, this gazebo has a metal roof.

Can you have home depot to install?

Hi Lb. Yes, depending on your location, you can add in home assembly when you order your Jackson Hardtop Gazebo online. Just check the box for “ADD IN-HOME ASSEMBLY”. You will be connected to one of our local Pro’s who can do the assembly for you at your own home. If the Add In-Home Assembly is not available in your area, simply check with your local Home Depot Service Desk and we can connect you with one of our certified local pro handymen who can assemble the gazebo for you. Please let us know if we can be of further assistance. Rick_HD_OC

What is the height from ground to bottom rail of roof?

The height from ground to the bottom rail of the roof is approximately 90 inches.

Does this have gutters?

Hi Robert. According to the Sunjoy Industries Customer service, the Jackson 12 ft. x 10 ft. Hardtop Gazebo does not have rain gutters. The roof construction diverts the rain to the edge of the gazebo where it drips off onto the ground. Please let us know if we can be of further assistance. Rick_HD_OC

What are the dimensions of the legs?

Hi Rush. Each leg of this Jackson 12 ft. x 10 ft. Hardtop Gazebo does appear to be approximately 4 inches wide at the base. Additional information was not available. However, there is a YouTube video from Sunjoy that shows how to construct the hard top gazebo. The dimension of the legs appears to be in the 4 inch range video. https://www.youtube.com/watch?v=rrKkNtNcSRw Please let us know if we can be of further assistance. Rick_HD_OC

What rating or capacity does the roof have for snow accumulation?

Will this be back in stock any time soon?

Hi KB, Per our vendor, this Jackson 12 ft. x 10 ft. Hardtop Gazebo does not have an estimated arrival date for Homedepot.com at this point. However, if you would like to be notified with updates on the status of this item, you can enter your email address into the field provided on the product's page. We appreciate your business and look forward to serving you in the future. Thank you for shopping Home Depot!

does it have netting at the top of the roof

No, this model does not have any netting. It has metal panelling at the top, below the gable.

What’s the entrance height at the edge?

0
Filter by:
Showing 1-10 of 16 reviews
Mar 5, 2015
Looks great!
I'm very happy with the finished project. It's very sturdy and looks great. Assembly wasn't difficult although there was a section of images missing from the instructions. Having hardware separated into packages according to the step was very helpful. Instructions say you need 6 people to assemble. We did it with 2 for most of the project and had one other person help while we attached the legs. We used cordless screwdriver & ratchets instead of the provided tiny wrench. Assembly was complete in one day.
by Susan

19 people found this helpful
Nov 14, 2014
Good looking Hot Tub Gazebo...
We (Spouse and I) initially put the roof together on sawhorses, this kept it off the ground by 3'. The top parts went together well with little problems and / or adjustments. We did that on first day of construction. The second day (one week later) we managed to raise the top and install the legs, it really helped having a Kubota tractor with a bucket... once the legs were attached we used planter pot rollers under each leg to be able to move the hole gazebo around. The third day I spent roofing the top, this is were nothing really aligned the way it should have and required an extra amount of work... However, when completed we were happy with the choice and it looks like it will serve our needs... I did spend extra time wiring up one of the legs with a switch and outlet for lighting. All outdoor covers. Doing this before final installation made it all that much easier.
by Gary

9 people found this helpful
Sep 28, 2014
Sturdy Gazebo
The other reviews are correct about some of the parts not fitting together easily. Following the instructions closely is very important to make the job easier. All the screws and bolts are the same diameter, just the head type and length are different so it's important to pay attention to directions for which screw or bolt to use. The hardware comes labeled very clearly and the instructions and hardware is divided into sections so don't remove the hardware from the labeled packaging until you are doing that section of assembly. Do yourself a favor and get a ratcheting wrench to help with assembly and a cordless screwdriver as there are a lot of screws and bolts to install during assembly. My wife and I put this up by ourselves. To do this with only 2 people means you'll need a ladder, since the instructions tell you to assemble the whole roof while it sits on the ground and then get 6 people to lift it up and get the legs under it. 2 people can do it if you only assemble the roof frame, tip it on 1 end, support the other end with the ladder, attach 2 legs, lit the other end up, support with a ladder and attach the last 2 legs. Then finish the roof standing on the ladder. We had some damaged pieces in our parts, probably from the delivery guy dropping the boxes twice while getting the gazebo from his truck to our garage. The parts come packaged well, in a steel framed reinforced box, but we still ended up with 3 bent roof panels and 1 bent roof frame member. I called Sunjoy, for replacement parts and they said they will ship them out no questions asked. We'll see, as I just called a couple days ago as I'm writing this and the parts haven't arrived yet. I would recommend this gazebo to anyone looking for a hardtop gazebo.
by Teddy

Customer review from homedepot.ca
Jul 7, 2016
Happy
All the previous comments were both accurate and helpful. I assembled this entirely by myself, taking 16 hours to do so. Set up the roof assembly on stands to work on (you'll need it high enough to walk under so you can work from the inside and outside, but low enough to reach - I had it about 3.5' off the ground). Used rope (attached to an adjacent, permanent awning) and ladders to raise and support it to install the legs. One handy feature was that you can support the roof on the legs before actually attaching them (to give you a break and buy you some time). As with everyone else, some re-drilling of holes was required, particularly when doing the roof sheets. Overall, I'm quite pleased with this product.
by
4 people found this helpful
Aug 2, 2015
Happy With Purchase
The pallet was delivered right to our garage. I opened the boxes and the parts were protected by metal frames, all the parts were fine and I carried the pieces to the back yard and took inventory, everything was there. The hardware is in separate packaging (step by step) which made it easy, also the back of the hardware packaging was perforated for easy removal. We followed the instructions and it seemed pretty easy, just a recommendation make sure not to tighten any screws/bolts until all are installed for that particular step. Some parts will need to moved around to get all of the holes lined up and if the screws/bolts are all loose it makes it easier. Me and my son put it together in 8 hours total, it was very hot so half way through we did stop for 1/2 hour to get some water and AC. Very happy with the purchase.
by Jim

Aleko's 10 ft. x 12 ft. x 9 ft. AluminumAleko's 10 ft. x 12 ft. x 9 ft. Aluminum Hardtop Gazebo with Removable Mesh Walls is the perfect addition to any outdoor space. Enjoy your backyard without being disrupted by weather variances. This gazebo is perfect for hosting picnics, parties and lounging. Made from a high quality, powder coated and corrosion resistant aluminum frame. The roof is made from 6 mm durable poly-carbonate. Comes equipped with full mesh walls for total protection from pesky mosquitoes, bugs, and wind. The classic and sturdy design provides you years of beautiful, outdoor enjoyment.See Full Product Description