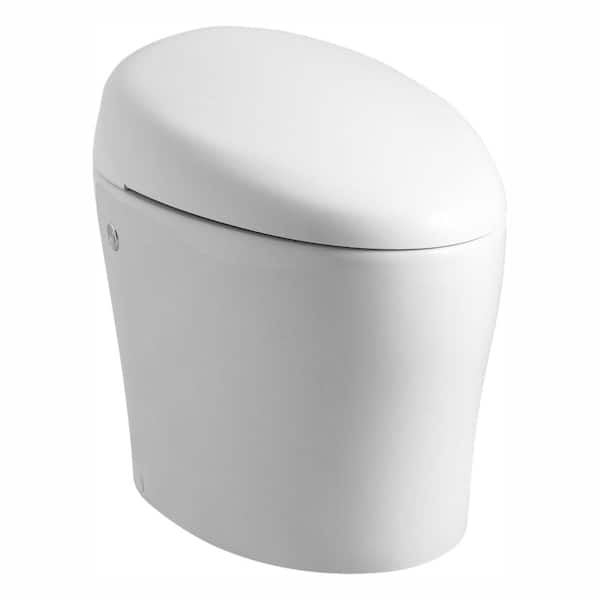 The one-piece Karing toilet enhances your bath decor with a stunning statement while offering innovative features for your comfort. Boasting a tankless design and elongated bowl, this compact toilet includes a toilet seat and offers a powerful 1.28 GPF for significant water savings. Combining cutting-edge technology with a sleek design, the toilet's included touchscreen remote provides personalized settings for two users. Control the heated seat, integrated bidet and air dryer. Enjoy a built-in LED night light and hands-free opening and closing. The carbon filter neutralizes odors for up to one year.

Customer review from kohler.com
Jan 24, 2017
It's Worth It
The Kohler Karing is the least expensive of the three intelligent toilets Kohler currently offers. The Karing nonetheless is quite impressive. Having done a few toilet installs, I decided to tackle this job myself. While it is more involved than a regular toilet installation, it was not at all difficult. If anything, I could have used help lifting it into place, but I managed on my own. The entire job took me just over three hours. That included removing my old toilet and wax ring then installing the Karing. My old toilet had a bidet seat so the electrical outlet was already there. The instructions are detailed but I found an updated version on the Karing product page on the HD website. Once you have the tank in place, you check to make sure the water level is set properly. The outer shell is then set on top and secured. You then make the connections in the back, put the back cover in place, and caulk around the base. I previously had a Kohler toilet with a Kohler bidet seat. While I really enjoyed using it, the Karing is a definite upgrade. I love the tankless design. Not only does it look good but cleaning it is a breeze. I installed this in our master bathroom. You have to walk past the Karing to get to my wife’s walk-in closet. I was surprised to see that the auto open doesn’t trigger. When you walk up to it, it opens quickly but it a quick pass doesn’t cause it to open. The deodorizer comes on as soon as you sit down. You can hear it but it’s a quiet hum. The wash options are numerous and there are two programmable user presets. The Karing flushes shortly after you stand up and the lid lowers minutes later. In all it’s a very satisfying experience. With only a 1.28 gallon flush, I was a little concerned that it was not going to be sufficient. A pump brings the water up front the tank below. Surprisingly the flush is quick and powerful. One thing I discovered is that if you press the button on the remote to raise the lid and seat, the Karing will auto flush when you walk away. It doesn’t happen if you only stand in front of the toilet a brief time. My guess is that there is a certain amount of time needed for the toilet to think someone used it standing up. As for cons, the Karing does not have an emergency flush. In the event of a power outage, we will need to use another toilet in our home. Granted in the six years we have lived in our current home there has been only one outage that lasted over an hour. The Kohler Karing Intelligent toilet is expensive but it is without a doubt excellent quality and a great addition to any bathroom.
by
Response from Kohler Product ExpertOct 15, 2019
Hello astonman, this is Sarah from Kohler Co. We are thrilled to hear about your experience with the Karing toilet and truly appreciate your positive feedback! We’d like to connect with you to discuss using your comments publically. Please email us at KohlerCustServ@kohler.com at your earliest convenience. Thank you for choosing KOHLER! -Sarah S. KOHLER Customer Service
10 people found this helpful
Oct 6, 2021
We love everything about it! The heated seat, the automatic...
We love everything about it! The heated seat, the automatic flush and seat open/closure, the front and rear bidet, the night light and the automated drying feature as well as the deodorizer… everything!!!!!
by
Sep 12, 2021
Fushing issues
I completely upgraded my home to be modern and techy. I felt that this piece would add what I was looking for in the bathroom. This toilet has definitely been a talking point of my family and friends. One day it just stopped flushing. Then due to the storm the power went out and it "fixed itself". Now it won't stop flushing and the lid will not close. We are now plugging in the toilet before use and unplugging it after. I've tried calling but the wait time for someone is pretty long and I work full time. When the toilet is working as intended it is definitely worth the money spent. Otherwise you're trying to figure out why it's so glitchy. I just want the toilet to work as intended.
by

Customer review from kohler.com
Sep 8, 2021
Flooded the house - very poor quality
Less than 3 months and has serious water leak near the water connection causing flooding. This happed while we were out of town for long weekend so whole floor was flooded. I like the feature of this toilet but it it is very risky as there is no water leak prevention and seems to have a poor quality.
by
Response from Customer Service Sep 8, 2021
Viren, my name is Meli with Kohler Co. I am sorry to read of the leak that has developed in your toilet. Whenever there is an issue with one of our products, we want to assist in every way we can. Please contact our customer care team at 800-456-4537 (M-F 8AM-5PM CST) so we may come to an agreeable resolution. We look forward to hearing from you. Sincerely, Meli V., Kohler Customer Service

Customer review from kohler.com
Jul 25, 2021
Expensive, and worth it!
I bought mine when they were a lot more expensive than they are now, so the price is not bad for the technology in this toilet, in my opinion. I bought it because everyone I know that has used a bidet said they love them, now I am one of those people!
by