Puretide Non- Electric Bidet Seat for Round Toilets in White 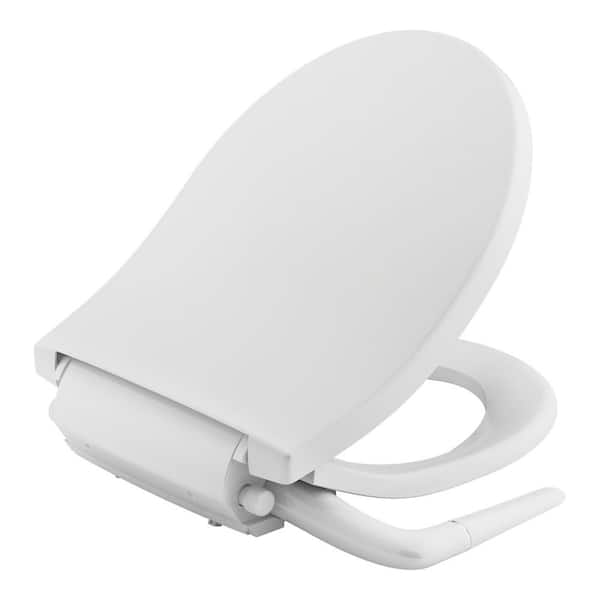 The Puretide cleansing toilet seat makes it easy to add the freshness and assurance of personal cleansing to your existing toilet. With a sleek, low-profile seat design that fits most round-front toilets, Puretide provides the superior cleansing of a spray wand that's fully adjustable for position and water pressure. This manual cleansing seat requires no electricity or batteries and installs in minutes, connecting to the toilet's water supply line.

10
Filter by:
Showing 1-30 of 195 reviews
Mar 5, 2021
The seat works but its way too small!!
The seat and bidet functions like it should and install was simple. The opening in the seat is way too small! I am a 5’11” 230lb man, not a huge guy by any means, and i can barely get my “parts” pointed down inside the bowl! The seat and lid seem more flimsy than the original Kohler seat we removed. This thing is getting returned! This seat was installed on a new Kohler highline round toilet (very common) i expected this seat to fit better.
by
3 people found this helpful
Sep 20, 2020
Easy to use. Will save doctor visits!
I really like this product. It was easy to install and is very easy to use. I've never been more comfortable. My son is a medical student. A surgeon who specializes in that area said that if everyone used one of these, there would be many fewer patients for his services.
by

Customer review from kohler.com
Sep 22, 2021
Don’t buy. Not good.
Not good pressure. Doesn’t do the job.
by
Response from Kohler Product ExpertSep 23, 2021
Eva M, my name is Jessica with Kohler Customer Service. I am sorry to hear you have rated the Puretide round bidet seat negatively. We would love to hear more about your experience in hopes that we can find a solution to your concerns. Please contact our Customer Service team at KohlerCustServ@kohler.com. We look forward to helping you soon. - Jessica P. Kohler Customer Service.
Sep 21, 2021
by
Sep 21, 2021
by
Sep 21, 2021
Love it!
As of now we have installed the Kohler Non-electric Bidet seat on every toilet at home and we love it! I am taking a point only because it is not an easy install, always a challenge!
by
Sep 21, 2021
Easy to install and works great. I would agree with...
Easy to install and works great. I would agree with another reviewer that the seat opening is noticeably smaller than other round seats.
by
Sep 8, 2021
Easy install
Good value for basic workability. Would be great if could allow a little more clearance @ rear of seat area for male species. Seat should be designed to stay completely upright against lid when raised. Trouble free and easy clean so far.
by

Customer review from kohler.com
Jul 29, 2021
Rating provided by a verified purchaser...
Rating provided by a verified purchaser
by
Jul 27, 2021
by
Jul 22, 2021
Going to this from one run by a remote with...
Going to this from one run by a remote with adjustable water temp, seat temp, and a blow drier is a real let down. But, this one was a lower price so I did buy it knowing it would not have any bells & whistles. I do like the way the seat is designed. Much easier to clean than my old one with creases on the edges.
by
Jul 19, 2021
Too small, feels flimsy
Round front is just too small for all but the smallest of people. Elongated might be better. Plus the plastic used is creaky and feels a bit flimsy which isn’t consistent with Kohler’s other product line which is normally so good.
by
Response from Customer Service Jul 20, 2021
Tpc123 my name is Jessica with Kohler Co. I am sorry to hear you are not satisfied with your Puretide seat. We put a lot of thought into our products, so it is unfortunate whenever we do not meet a customer's expectations. We would like to hear more about your experience with this seat. Please contact our Customer Service team at 1-800-456-4537. We look forward to hearing from you.- Jessica P. Kohler Customer Service.