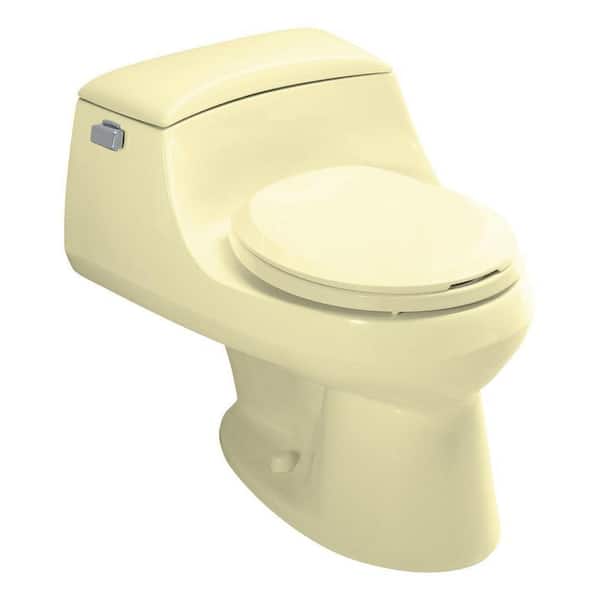 The San Raphael toilet features a contemporary, low-profile design for the modern bath or powder room. The concealed trapway on this model facilitates easy cleaning and enhances design while the Ingenium flushing system delivers complete 3.5-gallon performance in a 1.6-gallon package. For 12 in. Rough-In installations, the toilet has a round-front bowl and includes a French Curve toilet seat and a Polished Chrome trip lever.

5
Filter by:
Showing 1-10 of 30 reviews
Aug 5, 2014
Good looking and comfortable
Looks great in my remodeled bathroom in a 1929 house. Flushes quietly.
by
Aug 11, 2013
Horrible Toilet / poor performance!!!
This toilet might be fine with little to no use! It is always clogging and you need to flush twice just for it to flush clean. Changing the toilet seat is impossible and you need to buy a special$50 kit to replace the usually rusted anchors. Do yourself a favor and DO NOT BUY THIS TOILET! Something as simple as changing seat should not require the extra cost of a kit over the price of the $50 seat! I'm extremely disappointed with Kohler and thier lack of help with this matter!
by
9 people found this helpful
Dec 19, 2012
FANTASTIC!
I held off buying this toilet for a year because of the negatives I'd read & heard. I needed to replace a 20 yr. old "Rialto" & the shorter dimension made it my only option. But, I was so hesitant I waited & hoped Kohler would "improve" it. I finally bought it, but ONLY because I could wait no longer. WOW, was I surprised, this is a GREAT toilet! It's wonderful, one flush is all it takes & its higher h2o level helps keep it clean.
by
11 people found this helpful
Mar 18, 2014
Great value
This is a great toilet for a small space. We purchased two, one for a smaller, basement bathroom, and one of a larger, upstairs bath. We like the way it fits in the smaller space. For the larger space, the toilet looks awkwardly small. It's installed next to a rather large vanity, making it look quite out of proportion.
by
1 person found this helpful
Apr 2, 2013
Had everything i needed to install it from seal, bolts and caps, water line and seat.
Great product and am very satified! I would recomend it.
by
2 people found this helpful
Mar 20, 2013
Exactly what we needed!
We had to replace a toilet in our guest powder room. The washbasin and decor required a Tea-Green Kohler toilet, discontinued by the manufacturer. Home Depot managed to find a remaining toilet in their facility in Maryland. It was shipped immediately, arrived quickly and is now installed. Thank you Home Depot!
by
1 person found this helpful
Sep 9, 2012
unfixable junk - seat broke, it's done
The seat cracked after someone who might have been 160 lbs used the toilet. I was annoyed but thought I would just buy a new toilet seat and replace it, like I have a few times over the years in other houses, on other toilets. Nope, not with this one. The bolts don't protrude on the underside like they do with most conventional two piece toilets and are completely inaccessible except for the end the screwdriver mates with on the top. Those were utterly frozen, even with me putting all my weight on it (I'm a big guy, little over 200 lbs), and turning as hard as I could. So rather than paying my plumber to come out and try to drill these out and put something here, it's gone. 550 bucks for a piece of junk. Don't buy these - if the seat cracks or breaks, you're done.
by
7 people found this helpful
Jun 27, 2012
Terrible design !
Looks nice, but has a fatal flaw. The screws that hold the toilet seat go directly into the toilet base unit. In contrast to most toilets where the bolt or wing nut can be reached from underneath, there is no way to reach this part. The screws get corroded and are difficult to screw out. Worse, in my case, the bolt embedded in the toilet unit apparently came loose. The screw just kept turning uselessly, and there was no way to pry out the screw because the bolt was still attached to the screw even though it had come loose from inside the toilet itself. The toilet had to be disposed !!!
by
27 people found this helpful
May 31, 2012
kohler Rosario one peice tiolet
This one piece kohler tiolet is good in theory only. This has been a nightmare, just to change the simpliest things. The tiolet seat and cover does not replace easy. Took 5 days to get the 2 screws out, after almost breaking the tiolet. Screws had to be cheiseled out. Kohler's customer sevice is the worst. After the 1 yr. warranty is over-good luck.Their reps, told us tough, and hung up on us.I will never purchase another one of their products again. Buyer BEWARE!!!!
by
16 people found this helpful
Apr 4, 2012
could flush better
This fits in small areas well but it does not flush as well as the American Standard Champion 4. The seat is plastic and cheap looking. Tank cover was discolored with brown streaks in the porcelan and I needed to order a replacement.
by
4 people found this helpful
Showing 1-10 of 30 reviews

left side one piece toilets