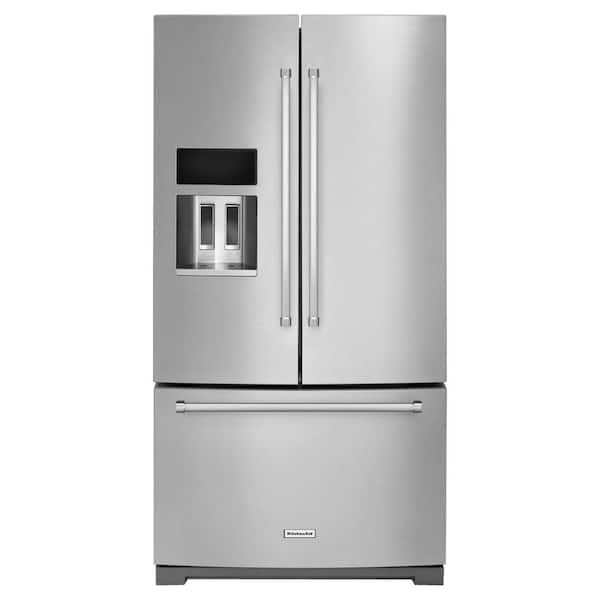 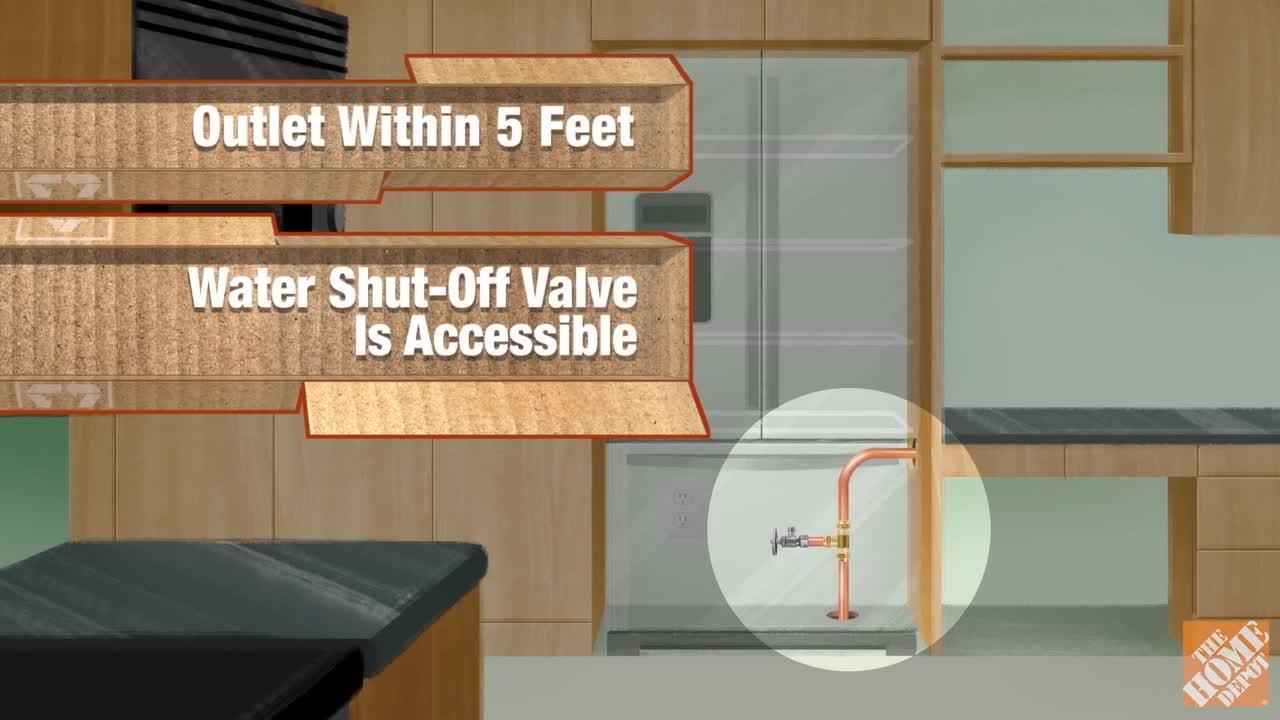 Home Depot Refrigerator Delivery & Installation
This video will walk you through the simple steps you must take in order to ensure a successful delivery and installation of your new Refrigerator from The Home Depot.
LEARN MORE ABOUT DELIVERY & INSTALLATION 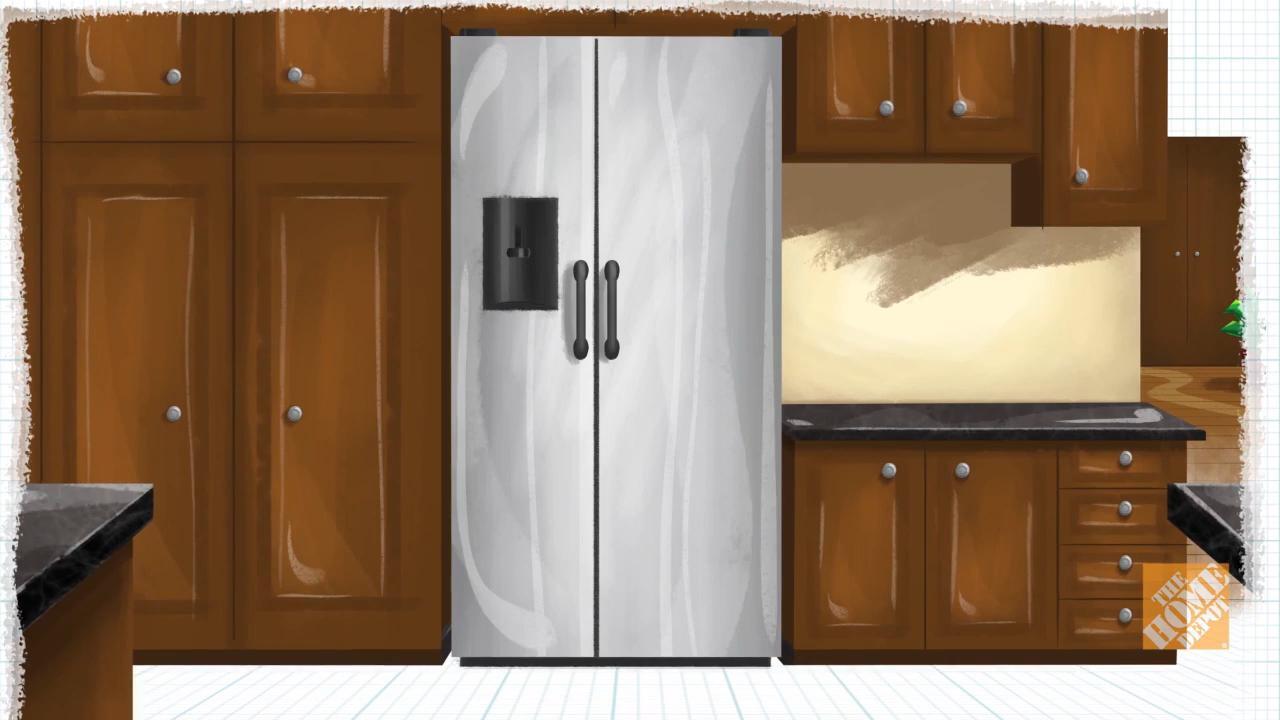 How To Measure For A New Refrigerator
Taking accurate measurements in your home is critical when purchasing a new refrigerator. Here are step by step instructions on how to do it correctly.
SHOP ALL REFRIGERATORS

72
Filter by:
Showing 1-10 of 886 reviews
Nov 22, 2019
Very Happy
[This review was collected as part of a promotion.] Just had all new appliances installed in our new kitchen. All beautiful to look at. Love the fridge and it's features so far.
by j2vphoto

Customer review from kitchenaid.com
Nov 18, 2019
So far so good
[This review was collected as part of a promotion.] I love this fridge! It’s sleek, it’s sexy - yes I said sexy! I love the metal details added on the inside and I love the adjustable shelves. I also love how quiet it is! The ice maker doesn’t makes much noise and it’s a pleasant surprise. We’ve only had it for a couple of weeks but so far so good! I do wish it was finger print resistant and it came it a bigger size but for now it’s a great buy!
by Enyonam G

Customer review from kitchenaid.com
Nov 6, 2019
Ice Buildup
We bought this in March 2017 and within one year there was an ice buildup behind the pantry drawer, the repairman moved a part in the rear of the refrigerator behind the back panel which was supposed to solve the problem but it has returned twice since. The fridge also goes dark and the repairman suggested we try unplugging the fridge for 2 hrs and then plug it back in to “re-boot” the fridge. This works but it only works for about 2 months before we have to “re-boot” it again.
by
Response from Social CareNov 13, 2019
Hello James Harry, thank you for your review. We sincerely apologize for the concerns with your appliance and would like to look further into this for you. Please feel free to reach out to us directly at 1-800-422-1230, via Facebook https://www.facebook.com/KitchenAid or Twitter @KitchenAidCare. We look forward to speaking with you.

Customer review from kitchenaid.com
Sep 12, 2019
Sleek!
[This review was collected as part of a promotion.] Our old 23+ yr old white side by side fridge died without warning last month and we did not have a lot of time to research new refrigerators, but so glad we stumbled across this french door fridge. We bought it about a month ago and love it. It looks so sleek in our kitchen, the top fridge is sooo spacious! I am still getting used to the bottom freezer space as it is a bit like a toy chest, but it does have nice compartments for organizing (the frozen pizza space is awesome). I wish the freezer space was a bit bigger and the fridge space a bit smaller for how we use it (we still have a lot of empty space in the fridge and freezer is pretty full), but that is not an issue as we still have a basement freezer. The ice and water dispensing on the door is slower than what we had before and I can hear it filling from the other side of the room, so that is really the only complaint. Make sure to get the fingerprint smudge proof finish if you get the stainless. Love the exterior door handles with the red on the ends - looks very high-end! Hope this fridge lasts as long as our old fridge!
by cadnj

Customer review from kitchenaid.com
Sep 6, 2019
Very quiet refrigerator
[This review was collected as part of a promotion.] This refrigerator has all the features I wanted. Great style.
by VICKIEJOJ

Customer review from kitchenaid.com
Aug 22, 2019
Priced way too high for what you get.
[This review was collected as part of a promotion.] Soon after receiving our new refrigerator, we noticed a lot of frost buildup at the freezer door due to the door being warped, so the freezer did not seal when closed. This also affected the ice maker, so that the ice bin was not cold enough, and the ice cubes all stuck together in one big wet clump. The water dispenser made a "growling" sound when used right from the first day, and had to be repaired. The water filter mechanism leaked, and flooded our pool table that was in the basement directly below the refrigerator. The refrigerator was replaced, but when the new one came, it had a big scratch on the door. We had to wait weeks to get that replaced. As far as features, they're pretty similar to other refrigerators. I wish I didn't have to open both French doors at once in order to get at the deli drawer. I have seen other manufacturers' models that have the door separate, and accessible on its own. There is a sliding shelf that collapses so that tall items can fit under it, if desired, but the shelf collapses if you happen to touch it accidentally while reaching for something, and the items on the shelf fall off. Overall, it's an okay refrigerator, but it was MUCH more expensive than other similar models, and after seeing all the problems we had with it, I don't think it was worth the additional cost.
by JeanC

Customer review from kitchenaid.com
Apr 30, 2019
Great features and works good...
[This review was collected as part of a promotion.] So glad we went with my wife`s choice looks and works great
by Me and her

Customer review from kitchenaid.com
Mar 17, 2019
Ice build up
Bought this 3 years ago and keep getting ice build up in fridge... Its been doing this for quite some time. It's making noises now... Not happy with this fridge at all.
by Edwardo22
Response from CA SOCIAL CARE Mar 22, 2019
Hey there Edwardo22, we are so sorry to hear that this has happened with your fridge, we completely understand this can be upsetting after owning a product for three years to have a failure. We would like the opportunity to resolve this concern. Please send us an email at canadasocial@kitchenaid.com with your best contact number and the model and the serial number of the fridge. Thank you! Yvette

Customer review from kitchenaid.com
Feb 18, 2019
Looks Great!
[This review was collected as part of a promotion.] Our new Kitchenaid 26.8 refrigerator looks great in our remodeled kitchen. It took a little while to get used to the French doors but after a few weeks they are no issue. Love the ice and water in the door and the inside is great!
by Rich in STL

Customer review from kitchenaid.com
Feb 7, 2019
happiness
[This review was collected as part of a promotion.] I've had this since early December 2018. LOVE IT! fits into the standard size of the old 1993 bottom freezer amana space without changing any cupboards a bonus.
by lizard1