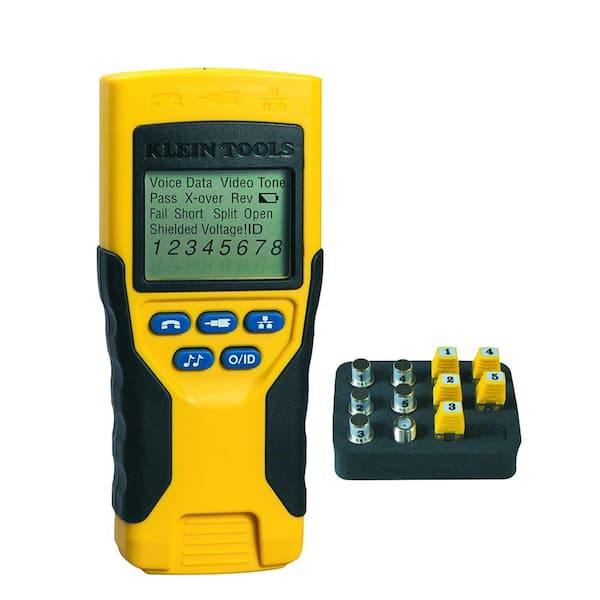 The VDV Scout Pro 2 Tester Kit is a versatile voice/data/video cable tester that locates and tests coax, data and telephone cables. Identify multiple cable runs with included remotes. With this kit, you can ensure fast and accurate cable installations each time.

Manufacturer Warranty
Please refer to the attached warranty document in the Product Overview section above under Info & Guides.

Will this device chech the input cable signal?

does it give print out of tested cables

No not at that price. I use post it notes or my notes on my phone

Does this meter save results?

Will this meter tell me which line is causing the "static" on my landline at my home?

Not directly, unless it involves one of the wires in the cable.

Will it tell you which end is miswired?

No it didn't for me had to identify that myself.

Will this meter read through a splitter?

Does it check Cable lenght?

can this tell you how far into the cable a short is or just that it has a short?

Only that it has a short. This meter does not do distance, that is available in the next better meter.

Can the tool be used to determine which cable has a signal?

All testing is static, only wire testing, not a signal analyzer.

Can you use it to test using just one end of the wire?

No, a transmitter is plugged in one end and the tester on the other.

3
Filter by:
Showing 1-10 of 88 reviews
Aug 23, 2020
Klein Pro Scout 2
Functions and operates as it should overall product is great. Price was a little steep but overall happy with this product
by Nick

Feb 9, 2015
simple to use
This cable tester will perform most of the duties anyone would need. The buttons are pretty self explanatory and the directions are pretty well documented. This tester won't measure length, if you require length measurements you will need to purchase the LT model. This model will test the cable if its its good and will also tell you which jack is at what location. The end pieces are numbered and the meter will let you know which number corresponds to what jack. The plastic case is probably not the most durable, I don't recommend dropping it. Also it didn't come with a case, but you can purchase that separately.
by Panaman

2 people found this helpful
Jan 25, 2015
Nice tester for DIY network and CCTV installation
My home wired network has 15 devices and 5 switches, and I have cats that chew on exposed cables, so I wanted a tool that would diagnose connection problems and identify cable runs. I'm also considering installing a CCTV system, so video testing and identification would be a plus. This Klein meter met my requirements perfectly. Continuity testing and identification for video are both done with the CoaxMap Location ID remote - a small push-on device with a male F-connector that has an ID number that is displayed on the meter.. To test continuity for phone or data, you connect one end of the cable to the tester and the other end of the cable to the "self-storing remote". This is a small yellow box that snaps into the bottom of the meter for storage. The continuity test is comprehensive, showing the pin connection on each end as well as detecting open and shorted connections. To identify a data cable, a LanMap Location ID remote is connected to the far end. This is a small yellow device with a RJ45 male connector and an ID number that is displayed on the meter. You can have data and video cables connected at the same time and the ID numbers displayed on the meter will alternate. Pressing one of the function buttons (voice, video, data, tone, ID) turns it on. For the voice and data functions, it automatically turns off in 20 seconds unless you hold the function button for 3 seconds, in which case it turns "LOOP ON", which keeps the power on until the O/ID button is pressed, or it will auto-power off after 5 minutes. The battery life is approximately 425 hours. The video F-connector at top of meter is male, with an exposed center connector that can be bent when the meter is stored. I'm going to leave the included female-to-female (barrel) adapter attached to protect it. This kit includes 5 RJ45 male ID plugs, 5 male push-on F-connector ID plugs, and one barrel connector. A 9 volt battery is included, but not a case. If you want to use it for a CCTV installation that uses BNC video connectors instead of F connectors, you'll need a BNC female to F-connector female adapter, which is not included. The tone function requires an analog tone probe, which is not included. There are several options for tone generation, including frequency, pattern, and which data wires the tones are placed on. The manual is comprehensive and nicely illustrated.
by Camano

The Scout Pro 2 LT Tester and Remote KitThe Scout Pro 2 LT Tester and Remote Kit is a versatile voice/data/video cable tester that locates and tests coax, data and telephone cables. The Test-n-Map Remote saves time by testing, mapping and identifying a location in a single step. In addition, you can measure cable runs, cable left in a box as well as bill jobs more accurately. With this kit, you can ensure fast and accurate cable installations each time.See Full Product Description