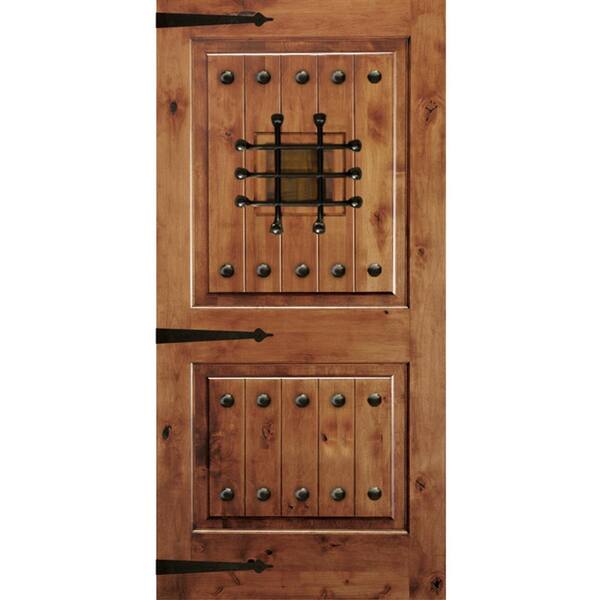 Krosswood Doors dress up both the entrance into your home and entryway into your life. Experience the beauty and warmth of wood with the Krosswood Two-panel Square Top Knotty Alder V-Grooved Exterior door. Door comes as a prehung ready for your opening and is easily stained with minimal prep time.

Mar 15, 2019
I purchased the door late summer/early fall 2018. For the price you pay, it is not worth it. For ...
I purchased the door late summer/early fall 2018. For the price you pay, it is not worth it. For starters, it does not come finished, so that is an additional cost with a local company. Second, it doesn't come with brickmould or the threshold extension so that it matches the brickmould (another added expense). I live in a cold climate and noticed on colder days I get frost under the door on the inside (cold transferring into the home via the aluminum bottom door sweep). No, I do not use a humidifier. My house stays around 34% humidity in the winter (I don't even get moisture on my windows). It also came all dinged up and full of filler (which had to be painfully sanded by a local company, 2+ hours of labor costs). Lastly, I can see the bottom of both jams where it meets the threshold appear to be soaking up moisture and I wonder how long until that rots. I make sure to keep the snow away and it rarely rains from a direction that will hit the door (would have to be a driving rain also). Overall, just disappointed in how much money I spent for what I got. If you want the look, and nothing more, this is the door for you. I should have bought the Home Depot in-store customizable pre-stained door for about $100 more (would have ended up less).
by
Response from Krosswood DoorsMar 18, 2019
We are sorry to hear that you are not 100% satisfied with your purchase. This is a knotty alder door and therefore does come with the natural knots in the wood. These are filled with wood so as not to have holes completely through the doors. From your pictures it does not appear that this door has been finished or protected. This is a must! Also, please make certain that you have a proper overhang on your door.

Oct 19, 2020
A very impressive door
I bought this as an interior door into my home theater which has a castle / medieval theme. It is a great door. The woodwork is excellent, the metalwork is excellent. It's a very heavy, solid door and I'm very pleased with it. There were only a couple of minor issues. One is that my speakeasy latch is too tight. I'm going to have to file the throw down a little so that it's easier to latch and unlatch, but it's not a big deal. The other problem is that I originally intended to install a mortise lock. If you look at the picture, you'll see there are no holes bored for a latch or deadbolt, which is what I wanted. However in the specs it says the door was to be "double bored." Unfortunately I missed that, as I was going off the picture. Since the door came in double bored for a modern cylinder style latch and deadbolt, I had to replace the mortise hardware (skeleton key lock) that I had originally purchased elsewhere. Finally, while the door came prehung, it swung the wrong way. This was probably my mistake. The problem is that when I was trying to figure out which way it should swing, the "inside" of the door faces the interior of the home theater, but I wanted it to swing OUT toward me and to the right, not into the room. If not for the speakeasy I would've just flipped it, but I couldn't. So the door swings into the room. But fortunately it will still work okay that way. Since two of these three "negatives" are user error, I can't fault them for it.
by
Response from Krosswood DoorsOct 20, 2020
We are happy to hear that you love your door!

Krosswood Doors dress up both the entranceKrosswood Doors dress up both the entrance into your home and entryway into your life. Experience the beauty and warmth of wood with the Krosswood Mediterranean style 2-panel Square Top knotty alder exterior Single Door. Door comes as a prehung with Light Brown Wood Stain and handing options ready for your opening.See Full Product Description

Krosswood Doors dress up both the entranceKrosswood Doors dress up both the entrance into your home and entryway into your life. Experience the beauty and warmth of wood with the Krosswood Two-panel Square Top Knotty Alder V-Grooved Exterior door. Door comes as a prehung ready for your opening and is easily stained with minimal prep time.See Full Product Description