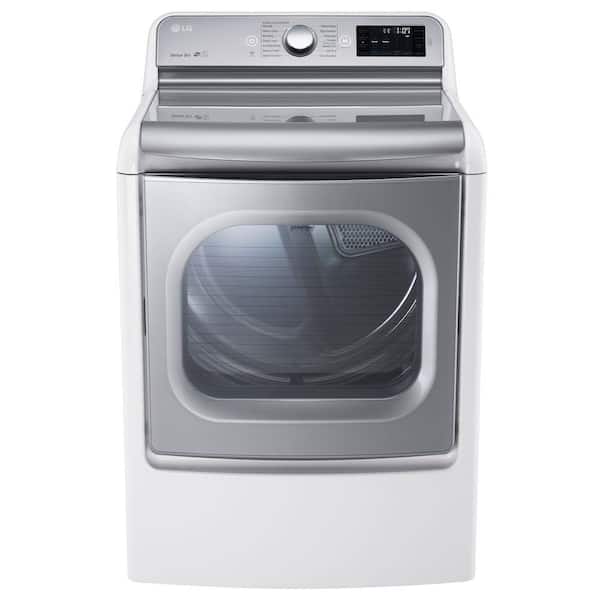 9.0 cu. ft. Electric Dryer with EasyLoad and Steam in White 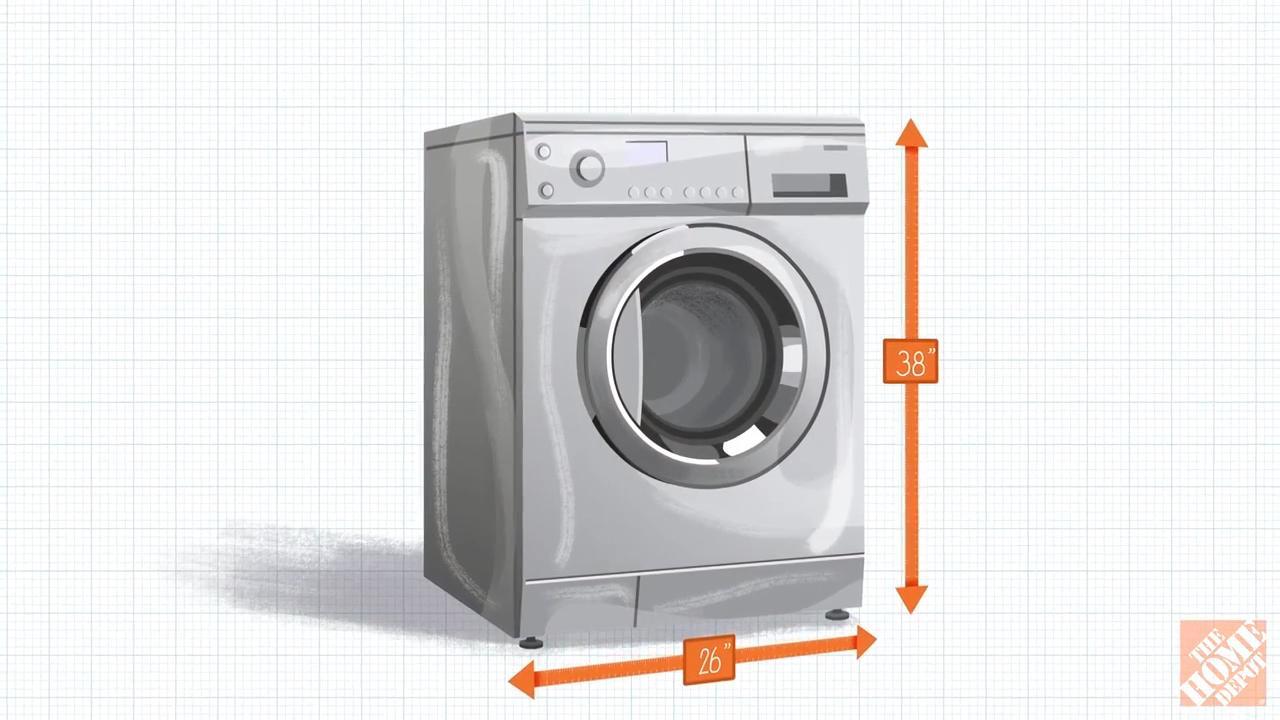 Washer and Dryer Dimensions
Taking accurate measurements in your home is critical when purchasing a new washer and dryer. Here are step by step instructions on how to do it correctly.
SHOP ALL WASHERS & DRYERS 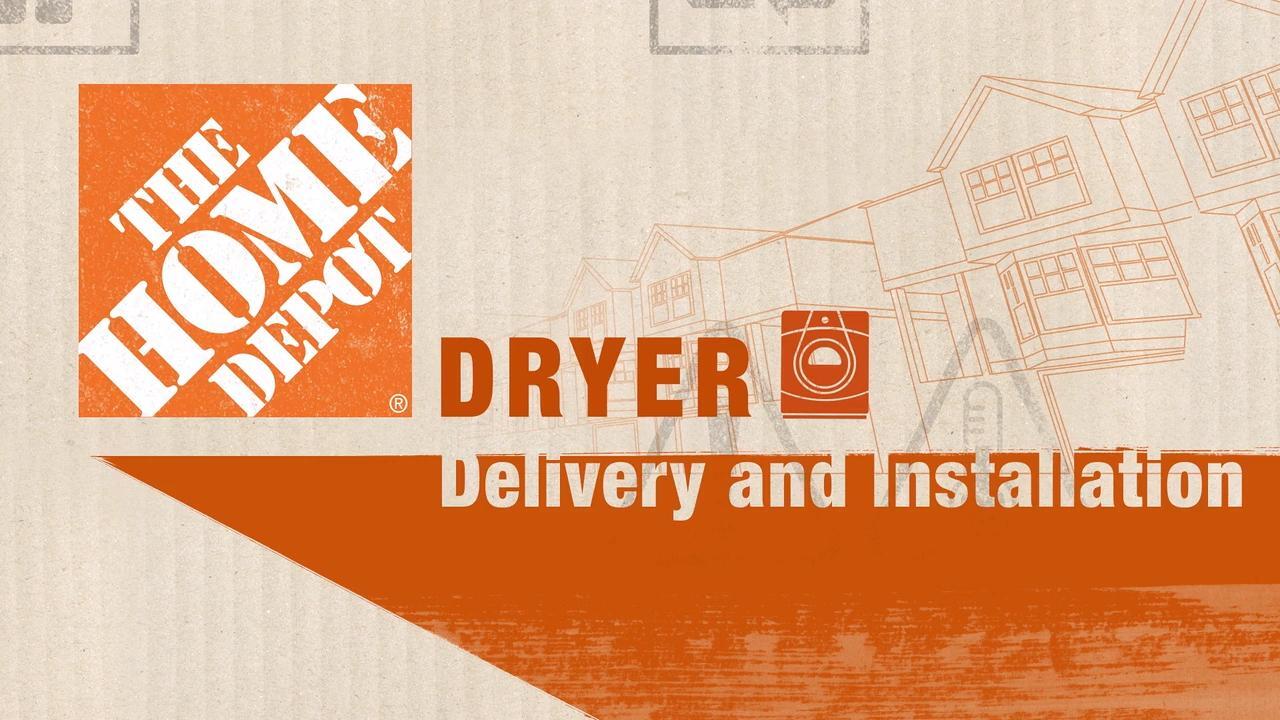 Home Depot Dryer Delivery & Installation
This video will walk you through the simple steps you must take in order to ensure a successful delivery and installation of your new Dryer from The Home Depot.
LEARN MORE ABOUT DELIVERY & INSTALLATION

Think loading and unloading those mega-sized loads will leave you ready to throw in the towel? Think again—the flexible LG EasyLoad door opens hamper-style to load wet clothes, then swings to the side for easy unloading. Even heavyweight loads are no match for the 9.0 cu. ft. capacity, which handles a king-size comforter and a full set of bedding in a single load. And keep favorite clothes in tip-top shape with the new TurboSteam option that knocks out odors and reduces wrinkles and those annoying hanger bumps in just 10 minutes—right in the dryer.

How will hard water impact performance of steam in the dryer?

Regrettably, we do not have any test results that show how hard water that's filled with minerals like calcium and magnesium will impact the steam performance in the LG 9.0 Cu. Ft. Mega Large Capacity TurboSteam™ Dryer With EasyLoad™ Door, Model # DLEX7700WE. We highly recommend that you use water softeners to negate the presence of any calcium and magnesium, effectively resolving the hard water problem...^IFV

Could I still purchase this dryer?

Is this a ventless dryer?

The LG 9.0 Cu. Ft. Mega Large Capacity TurboSteam™ Dryer With EasyLoad™ Door, Model # DLEX7700VE has to be vented to the outside. It is not a ventless dryer...^IFV

what is the matching washer for this dryer?

The WT7700HVA is the matching washing machine for the DLEX7700VE. ^CP

What is the this dryers height

Does the Child Lock keep the door locked?

When Child Lock is set on the dryer, the Child Lock indicator appears and all buttons are disabled except the Power button. This prevents children from changing settings while the dryer is operating. ^AC

How long is the long water inlet hose that comes with EasyLoad Electric Dryer with Steam in Whit...

We would be happy to help find a dryer that fits your needs best. Our support team is available via Twitter @LGUSSupport, Facebook https://www.facebook.com/LGUSA/ or you can give us a call at 800-243-0000. ^CP

the drum light doesn't turn on when door is open.

Hi Martha. The drum in the LG 9.0 cu. ft. Electric Dryer with EasyLoad and Steam in Graphite Steel, Model # DLEX7700VE is equipped with a blue LED that illuminates when the dryer is turned on and it automatically turns off when the door is closed and the cycle starts. You can turn it on during a cycle by pressing and holding the TurboSteam™ button for three seconds. The drum light will illuminate and then turn off automatically after four minutes. If the door is closing and you can start your wash cycle, then the machine will need a repair service and the LED will need to be replaced. You can contact our Support Center at (800) 243-0000 for assistance scheduling a repair service, or you can visit us at https://www.lg.com/us/support/repair-service/find-repair-provider to find an LG Authorized Service Center near you that you can make arrangements with for a repair service...^IFV

Can this be vented on the right side?

Hi Jean131. The LG 9.0 cu.ft. Mega Capacity TurboSteam™ Dryer with EasyLoad™ Door, Model # DLGX7701VE cannot be vented on the right side. Right-side venting is not available on gas models because the burner housing is on the right-side...^IFV

3
Filter by:
Showing 1-10 of 140 reviews
Mar 5, 2019
Has one serious flaw that needs to be redesigned
We really enjoy this dryer especially because of its large capacity, and that clothes really come out dry. However, there is a flaw in the design of the lint filter. This lint filter has to be removed, and then opened to get to the lint. It "opens" up similar to opening a notebook. After removing the lint, you close it back up and insert back into the dryer. It has no hinge; it is flexible enough to let you merely spread it open. However, after a few months of opening and closing, the flexible plastic of the outer frame will break, and then the fabric part of the filter will rip. The filter costs over $40USD to replace. Ours was purchased 1/3/2018, and the filter had to be replaced on 3/4/2018, 60 days later. Now a year after that, on 3/3/2019, the replacement filter is broken the same way. This filter should be two pieces, with a physical hinge connection, to prevent this and give a longer service life. Or, the replacements should be severely reduced in price, as they will be purchased so often.
by Herrells

Customer review from lg.com
Feb 22, 2019
Great features - but took 2 to get it right
[This review was collected as part of a promotion.] Bought this from a local appliance dealer/ retailer. Was delivered n set up. Upon putting the first load in to dry, it immediately started making a large banging noise and then smoke started coming from the back. Immediately shut it off n unplugged it. Store replaced it a few days later, but QC at LG was not what I expected from their company. The new dryer works great, large drum, flexible controls and easy loading and unloading. But have your delivery person turn it on before they leave.
by Pjjake

9 people found this helpful
Mar 15, 2021
A few minor issues!
[This review was collected as part of a promotion.] Looks great but several issues: the door does not stay open, can’t put it full open due to space issue and when only open 3/4 it keeps closing while unloading. Need to push a button for light to come on to see to unload!
by Hosta Lady

Customer review from lg.com
Mar 4, 2021
Great Appliance! Love it!
I bought this a month ago and love the size of it! I used to have to three separate loads of laundry but now I can get this all done in one load (if I really wanted to). I love the upgrade!
by Kevind10

Customer review from lg.com
Dec 29, 2020
Great features
[This review was collected as part of a promotion.] I bought this a couple months ago and love it. Easy to use
by Sassy19

Customer review from lg.com
Dec 6, 2020
Reliable and Dependable
I have had this dryer for five years. Large capacity that has been a consummate workmate in my home. Three loads a day for five years and able to be repaired on the rare occasion of disrepair. Still works as good as the day I bought with no end in sight.
by TJ Poway

Customer review from lg.com
Mar 16, 2020
Excellent for taking out wrinkles !!!!
Bought Feb. 21st and absolutely love, drys clothes the first time, and if something should wrinkle all you do is use steam feature and no more wrinkles awesome dryer!!!
by Russ815