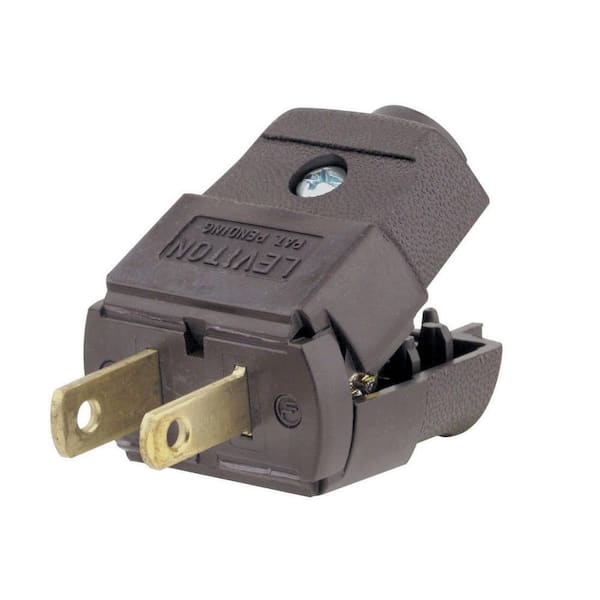 1
Filter by:
Showing 1-8 of 8 reviews
Mar 11, 2016
Easy to install; works great
I turned the wall light switch on and immediately smelled smoke. It turned out that my 50+ year old lamp cord had frayed where it met the plug, and was shorting against the other bare wire. When I put my hand on the plug, it broke into three pieces; turns out, it wasn't the first time it had been repaired (i.e., the original plug broke years before that, probably by my father). The old plug was the "snap-in" kind, which doesn't require insulation to be stripped, but, that means that the sharp "needle," as it were, inside the plug, has to pierce the insulation fully to ensure a connection. I discovered, long ago, that these are not the best plugs to use, because they don't pierce fully without a LOT of pressure (I've broken a couple trying to do so with my bare hands!), and the slightest twisting or pulling of the wire can cause the insulation to slide over it, thus causing a disconnect, or it overstrips the insulation, causing the short. Given that, I wanted a plug that required stripping and would be connected to the plug with screws, not unlike that of an electrical socket. This plug met that requirement. The hardest part was stripping the insulation (separating the cord 1-1/2" then stripping 3/4" to the bare wire, per the instructions). Then, it was easy to connect the wires to their corresponding screws (see photos showing the wire connected to the plug; the ribbed side is on the left and goes to the silver screw, while the smooth side goes to the copper colored screw on the right). It was a little difficult to close the plug over the wires, but, a little extra pressure did the trick, and then I screwed in the outside screw, which secured the wires, snugly. I plugged it into the wall socket, and it worked just fine. I then tried to plug it into the polarized extension, which works off the room light switch, but, I had a devil of a time pushing it in, and couldn't get it to go in, fully. However, it is in about 98% of the way, perfectly secure, and is on a bare, wood floor, so, no problem with short circuiting or someone tripping over it, etc. This was just what I needed, and it took all of 5 minutes to strip the wires and install them into the plug.
by
6 people found this helpful
Sep 22, 2020
There should be a gold screw and a silver screw... this has two gold screws
In wiring lamps to a plug it's quite important to get polarity right, so that the silver colored wire goes to the silver screw which goes to the neutral blade. But this plug has two gold screws. Very unhelpful. I had to go to YouTube to find out whether the larger blade is neutral or hot.... found that it's neutral. So am not too pleased with the product, having to unnecessarily waste time.
by
Dec 6, 2017
5 Star Review
Rating provided by a verified purchaser
by
Nov 16, 2017
Used this plug to repair a toaster. Plug would not close easily on cord, really had to push it w...
Used this plug to repair a toaster. Plug would not close easily on cord, really had to push it while turning the screw. Got it closed and it works fine. Plug should have more room for cord.
by
Nov 8, 2017
Plug has a channel for the wires to sit in from the screw terminals to the exit point. Tried it w...
Plug has a channel for the wires to sit in from the screw terminals to the exit point. Tried it with 16 gauge insulated stranded wire. The top of the plug (side with the screw) has plastic "pushers" that are for holding the white & black insulated wire ends down hard in those channels. On the one I bought, those pushers prevented closure of the plug. I.e., using just the screw, the two plug halves wouldn't touch (about a 1/8" gap) by tightening the screw. Perhaps it would close in a vise, but I threw the new plug directly in the trash. Might be the first unacceptable Leviton product in my lifetime...
by
Response from levitonProductExpertDec 5, 2017
Leviton sincerely regrets your dissatisfaction. We’d like to know more about your specific installation and the problem you encountered. Please email to Ebusiness@leviton.com your phone number and best times to call and we will have a technical support specialist call you to offer assistance.

Sep 13, 2017
4 Star Review
Rating provided by a verified purchaser
by
Dec 27, 2016
Does it's job
Very easy to install, simple instructions. Saved me over $100 from not having to buy a new air blower to push the hot air around. Does its job.
by
1 person found this helpful
Jan 31, 2012
Installation was easy
Installation was easily completed on the appliance AC cord.
by
9 people found this helpful
Showing 1-8 of 8 reviews